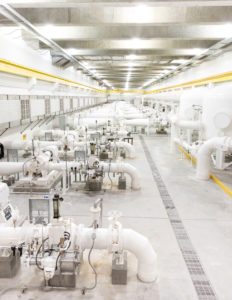 Earlier this year, the Clark County Board of Commissioners—serving in its dual role as the LVVWD’s Board of Directors—adopted a 10-year capital improvement plan for the not-for-profit water utility, which serves all of Las Vegas and unincorporated portions of Clark County. Although the LVVWD’s water delivery system is currently rated among the nation’s most efficient, with a main break rate eight times lower than the national average, a citizen’s advisory committee recommended proactively reinvesting in the vast network to maintain its reliability and prevent expensive emergency repairs. The LVVWD’s system includes approximately 6,500 linear miles of water mains and service lines, nearly a billion gallons of reservoir storage, and enough pumps to move more than a million gallons of water per minute around the valley. In 2016, the LVVWD delivered more than 110 billion gallons of water to nearly 400,000 residential and business customers.

“Water infrastructure is largely invisible,” explained LVVWD Infrastructure Management Director Greg Kodweis, who has been working in the water industry for more than two decades. “You turn on the faucet, and water comes out. People don’t really think about what goes into making that happen until something breaks; at that point, it becomes an emergency. Our goal is to prevent that from happening and make water service something you don’t have to think about.”

To minimize service interruptions, the LVVWD’s Infrastructure Management department continually evaluates the condition of the system, which is comprised of millions of individual pipeline segments, valves, meters and other components. Each of these components has a finite service life; while large-diameter pipelines may hold up for decades, meters may last fewer than 10 years. The key, Kodweis said, is to stay on top of maintenance and know when it’s time to replace parts. 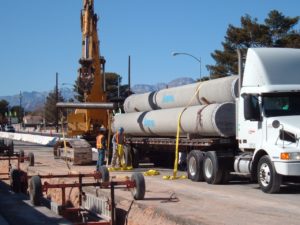 “It’s kind of like maintaining a car. If you don’t change the oil and replace the tires periodically, you’ll end up on the side of the road,” Kodweis said. “We use sophisticated software to identify potential issues of concern and prioritize rehabilitation and replacement projects. This technology allows us to get the most of our facilities while minimizing costly emergency repairs.”

For instance, the LVVWD uses a water pressure monitoring system to optimize operations and maximize the life of pipelines, while a high-tech acoustic monitoring system “listens” for leaks and alerts the utility if they occur. Last year, the LVVWD installed and inspected approximately 55 linear miles of water pipe. One upcoming project calls for the replacement of an older subdivision’s water delivery system—including water mains, service laterals and even fire hydrants—to bring it up to par with newer parts of the community.

In total, the LVVWD plans to invest more than $600 million during the next decade, with about two-thirds of those funds targeting repair and replacement projects to benefit existing customers. The balance is divided between new facilities to serve growing portions of the valley and a state-mandated water quality protection initiative. For more information, visit lvvwd.com.