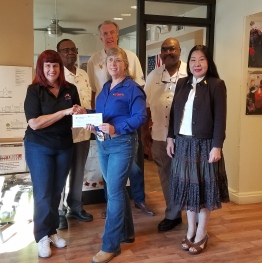 “Las Vegas Elks Helldorado Days has always had a purpose of raising money for charity,” said Beverly Salhanick, president and director of the organization. “The Elks focus on two areas for their charitable works. One is veterans and the other is children,” she said. “And because we have traditionally ended Helldorado Days with a rodeo, we support both the Nevada State High School Rodeo Association and UNLV Rodeo.”

This year, Helldorado also organized a motorcycle run with Bikers Against Child Abuse, leading to their donation to that non-profit.

The Las Vegas Elks Lodge took over production of Southern Nevada’s iconic Helldorado Days around 1937. It was originally founded by Clyde Zirby in 1934 as a way to entertain Hoover Dam construction workers. The Lodge has raised millions of dollars over the years for local charitable organizations in addition to its own operations.

Approximately 3,500 people participate in the Las Vegas Elks Helldorado Days every year. “It is the oldest civic event in Las Vegas and represents a piece of our city’s history,” said Salhanick. “It represents part of the Elk’s cardinal principle of charity (Elks Care, Elks Share). And it continues the history of Las Vegas while evolving to meet the entertainment needs of our growing city. It supports some of our neediest populations while preserving history.”

A time-honored tradition in the City of Las Vegas, Elks Helldorado Days is a month-long celebration of Southern Nevada’s rich western history that incorporates a multitude of events for the entire family. 2018 events kick off on April 21 and include the annual golf tournament, art show competition and Rodeo. The Rodeo, which will feature Helldorado’s infamous “Muttin Bustin” competition and Whiskerino competition, will be held May 10-12. For more information visit elkshelldorado.com.