You are here: Home / Features / Cover Story / Nevada Strong: The Impact Of The Armed Forces In The Silver State 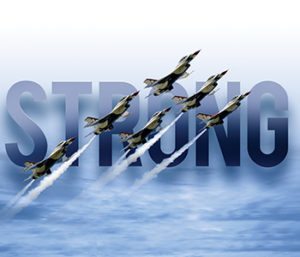 The U.S. Armed Forces are doing work in Nevada that’s critical to the defense and security of the nation and the state — training pilots, testing drones, fighting overseas remotely, storing munitions and helping battle fires, to name a handful.

The numerous installations throughout the Silver State — those of the National Guard, Air Force, Navy, and Army — contribute to the state’s economy by way of job creation, employment of people and businesses, financial and social community support, tax generation and more.

The U.S. Department of Defense (DOD) spent $2.3 billion, or 1.6 percent of the state’s gross domestic product, in Nevada in 2015, according to a 2017 report by the National Conference of State Legislatures, an organization that provides tools, information, and resources to state legislative bodies. This federal outlay increased economic output here by $28 billion and state taxes by $307 million.

The same year, the DOD employed about 20,683 individuals (active/reserve military and civilians, not contractors) in Nevada, about the same amount of K-12 public school teachers on the payrolls statewide.

Looking individually at the military bases in Nevada, it is clear that each one has impacted the state’s economy.

Along with various units, the base is home to the United States Air Force (USAF) Warfare Center and more than 52 tenant units and agencies, including Air Combat Command’s largest medical center and civil engineer, communications, logistics readiness and force support squadrons.

It’s also the site of the 3.1 million-acre Nevada Test and Training Range, where various kinds of testing and training are conducted. A practice known as Red Flag is an example of weeks-long, high-intensity, air-to-air combat training exercises that give pilots experience fighting in real-world scenarios.

Nellis also is where the USAF Aerial Demonstration Squadron, more commonly known as the Thunderbirds, is based. Created in the mid-1950s, the “ambassadors in blue” fly in numerous air shows year-round at various locations throughout the U.S., one being Nevada. It participates in the Aviation Nation Open House events held at the base, too.

“What they bring to our air force is inspiring our young people to join,” Murray said of the Thunderbirds.

Between fiscal years 2012 and 2019, about $450 million worth of construction has or will take place at Nellis. It includes additional buildings for the Fighter Weapons School specifically for the F-35, which should be completed in the next few months. Subsequently, the school will launch its F-35 doctoral program in January. The base has 12 F-35s and will get 24 more over the next few years.

“We’ve diversified into multi-domain operations,” Murray said. “It’s not just air anymore. Nellis is kind of the epicenter of training for space and cyberspace.”

Also in progress is Nellis’ collaboration with the state, local counties, and cities on a Joint Land Use Study aimed at developing a strategic plan, which should accommodate all parties’ needs, for the land surrounding the base.

“When that product is complete, we’ll all be able to say, at least from a government and military standpoint, this is what the valley is going to look like in 2030, 2035,” Murray said.

A major change that’s planned is to increase the workforce there from 3,000 to 4,000 to allow pilots to work schedules of six months on and three months off, rather than year-round without significant breaks.

Because this requires, in part, recruiting and training additional pilots and building more infrastructure, increasing the population would start in 2018 and take place over time requiring two or three years to accomplish, Murray said.

The operations at Nellis, Creech and the NTTR had an economic impact in the fiscal year 2016 of about $5.2 billion, according to the “Economic Impact Analysis Fiscal Year 2016” report.

During that time, about 10,148 military and 3,432 civilians were employed between the three entities with a combined payroll of more than $983 million. Further, on any given day, more than 1,000 temporary-duty personnel conduct business on site.

The installations created 6,933 indirect, high-tech, high-paying jobs (average annual salary is $85,000) with an annual value of about $292 million.

Wong would know, as his Las Vegas-based, 320-employee, federal government contracting firm, is one of them. Many employees of the engineering services, IT, program/acquisition services and the multimedia company currently work out of the NTTR. Others work on site at 10 other U.S. contract locations, including various NASA facilities.

Arcata’s work for the military tends to involve systems testing, evaluating, engineering and training, Wong said. For instance, the business’ experts help support Red Flag, developing new systems to be integrated into the range to make the environment as realistic as possible and helping train the pilots and crews.

Naval Air Station Fallon
The primary activity at the 8,600-acre Naval Air Station (NAS) Fallon is advanced tactical flight training, air to air and air to ground, with aviation maintenance and defense contracting also taking place, said Zip Upham, the base’s public affairs officer. About 1,400 individuals are employed at the installation, plus about 1,300 to 1,600 contract workers.

Planned for NAS Fallon, between 2015 through the end of the decade, is $180 million to $200 million in contracts for maintenance and new, expansion-type construction.

An additional plan is to update NAS Fallon’s Air Defense Strike Group Facility to an Integrated Training Facility by 2020, which would allow for integrated live (in the air), virtual (via a simulator) and constructive (computer-generated) training—a significant technological advancement. In other words, pilots in the air could be connected with ones in a simulator to operate in the same constructive environment.

NAS Fallon generated $517 million in regional (Churchill, Lyon, and Washoe counties) economic activity in 2015, according to the “NAS Fallon Economic Impacts May 2016” report.

Military and civilian, excluding contractor, jobs totaled 4,586. The average annual salary for a base-related government job is just under $60,000. Base payroll and spending stimulated the economy by $22 million.

This base is one of only a handful of its kind in the U.S. were the primary mission involves receipt, issue and storage of conventional munitions; disposal of unserviceable, obsolete and surplus munitions; and maintaining munitions readiness through inspections, service, and renovation.

SOC also continues to seek opportunities to generate revenue for the depot by leasing the excess space to companies. As part of the Armament Retooling and Manufacturing Support Program, in its infancy but going well, Bishop said agreements have been secured with Aerojet Rocketdyne, a California-based defense contractor, to store rocket motors, magazines and propellant and a fireworks company to keep its inventory on the premises. For its work, the SOC was awarded an $840 million, 10-year contract in 2010.

In August, the depot again executed Operation Patriot Bandoleer, in which Nevada National Guard members move ammunition that needs to be relocated to a different storage depot as opposed to relying on past methods of commercial truckers or trains hauling it. The program, Bishop noted, offers Nevada guardsmen and women real-world training and saves the depot transportation costs.

Another ongoing project involves environmental clean-up of various munitions response sites on 7,000 acres of Bureau of Land Management (BLM) land. The goal is to ensure no munitions remain and the areas are safe.
Statewide

Nevada National Guard
This joint force, comprised of the Nevada Army National Guard and the Nevada Air National Guard, trains and protects life and property in the state when called upon and carries out federal missions, such as cargo and personnel transport, overseas.

For example, in the spring, 140 soldiers and airmen assisted with protecting homes in Lemon Valley in Northern Nevada with sandbags and moving equipment for construction of a four-mile-long wall to stave off damage from flooding. Further, the 152nd Airlift Wing is one of four units nationwide that support the U.S. Forest Service’s firefighting efforts, said Tech. Sgt. Emerson Marcus, Nevada National Guard state historian, and spokesperson.

The guard occupies 16 primary facilities statewide. In progress at the Nevada Air National Guard Base in Reno is the construction of a new operations building. Reno-based H&K Architects was awarded the $10 million contract for it earlier this year and it has numerous subcontractors working on the project that’s due for completion in December, Marcus said.

In the fiscal year 2016, the Nevada guard was made up of 3,211 soldiers and 1,137 airmen, 460 full-time federal technicians and 400 individuals on active guard and reserve orders.

In terms of wages, payroll was $22 million the same year, according to the “Nevada National Guard Biennial Report 2015-2016.” The guard also provided $57,824 in tuition assistance to members enrolled in the Nevada System of Higher Education (NSHE).

Other people employed at the Nevada guard’s facilities work for the state. In 2016, there were 102 state employees in administration and facility maintenance of the armories throughout the state, along with firefighters at the Nevada Air National Guard Base and security personnel.

Most of the Nevada guard’s budget comes from federal funds with a smaller portion of state monies, said Marcus. The branch is expected to bring into the Silver State more than $120 million in federal money in the fiscal year 2017.

Contributions from military installations in the Silver State are a significant and oftentimes overlooked portion of Nevada’s economy. Whether through protection efforts, firefighting assistance, job creation or, as in the case of the Thunderbirds, the “cool” factor Nevada bases are an essential part of the state’s multivariate economic landscape.