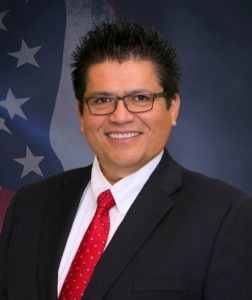 The appointment was made during a special meeting of the Southern Nevada Workforce Development Area’s Local Elected Officials Consortium (LEOs) on Tuesday, October 10, 2017, after a structured interview process.

“I’m thrilled for the opportunity to lead the exceptional staff at Workforce Connections while continuing to improve the delivery of employment and training services to job seekers and employers in Southern Nevada,” said Cruz.

Cruz, 51, has served as chief strategy officer for Workforce Connections for the past eight years and has been instrumental in partnering with local libraries to expand WIOA driven workforce programs in our local area, providing more access points to serve the community while avoiding additional infrastructure costs. Cruz has a background in engineering and worked on sustainability initiatives for major hotel-casino companies in Las Vegas.

Cruz earned his Bachelor’s Degree of Science in Mechanical Engineering from Escuela Nacional De Marina Mercante in Lima, Peru. He also is recognized as a certified energy manager and certified sustainable development professional from the Association of Energy Engineers, as well as a certified public manager by the State of Nevada. Cruz has lived in Southern Nevada for 30 years and is the father of two, Samuel and Sofia.

“As an engineer, Jaime is analytical, results orientated and straight to the point which is critical leadership qualities,” said Boulder City Councilman Warren Harhay, a member of the Local Elected Officials Consortium. “In addition to his leadership skills, he has strong relationships with the U.S. Department of Labor, the Nevada Department of Training and Rehabilitation (DETR) and other workforce agencies. We are excited for him to lead the agency.”