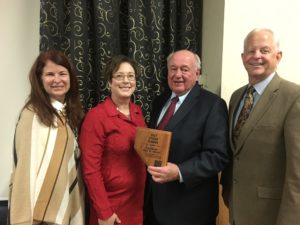 Dan Shaw, City of Henderson Ward II councilman, was awarded the Nevada Chapter of the American Planning Association’s DeBoer Award for Distinguished Leadership as a Citizen Planner at the annual State Planning Conference in Carson City, Nev. The Citizen Planner Award is given to an individual who has advanced or promoted the cause of planning in the public arena.

With nearly 30 years of volunteer service as a citizen planner on the Planning Commission for the City of Henderson and Clark County, as well as a City of Henderson Parks and Recreation Board member, Councilman Shaw has been instrumental in shaping the built environment and raising the bar on the quality of life in southern Nevada.

In addition to his volunteer service, Councilman Shaw has directly impacted the development of the high quality of life for Henderson residents. During his tenure as chairman of the Henderson Planning Commission, Councilman Shaw worked to implement a new development code, increasing the standards to the City of Henderson. During his time with the county as chairman of the Clark County Planning Commission, he worked to facilitate increased planning coordination between local municipalities through adoption and early implementation of regional planning efforts such as the Southern Nevada Strong Regional Plan.

Councilman Shaw has greatly impacted the growth in southern Nevada during his 33-year Henderson residency. He has made various efforts to contribute his time and expertise to help steer the development in the city of Henderson. He was responsible for the construction of multi-family housing units, as well as shopping centers, office parks and industrial improvements.

The Nevada Chapter of the American Planning Association serves to promote public involvement and excellence in planning and to improve the quality of life in the State of Nevada through professional development and education.