You are here: Home / Press Release Wire / Boogie On Down To Last Friday’s October 80’s Costume Themed October Event Where There Is Something Totally Awesome For Everyone 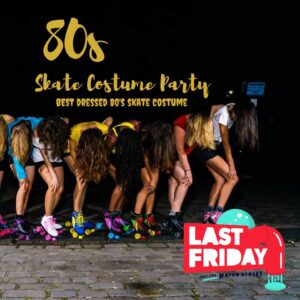 Historic Water Street continues to groove into growth and fun with the Henderson community in downtown Henderson, Water Street District.

Last Friday, Just Add Water Street event continues to draw crowds of over 5,000 people to this otherwise sleepy little town on a typical Friday night. Due to so much attention from the Vegas Valley foodie community, two of Las Vegas’ most notable Strip chefs are vacating their kitchens on a Friday night to compete in a live Foodie Challenge!

This special edition of Last Friday is inspired and crafted around 80’s nostalgia. Family’s should head down to Water Street in their best 80’s gear and skate to hoppin’ 80’s tunes to live music by Image Club, J Gibbs, and Undecided. There will also be a live DJ performance by DJ Cammi alongside bites from local food trucks and foodie pop up activations.

Last Friday continues to celebrate all things artistic with artist Heather Richileau who will be painting a Vegas Strong mural to be auctioned off during our event with 100% of the money going to charity.

The live fun gets even more exciting with the Foodie Challenge kicking off at 6:30 p.m. Local celebrated executive chefs, Stephen Hopcraft of STK Las Vegas at the Cosmopolitan faces off against Border Grill chef, Mike Minor at the Mandalay Bay Hotel. The foodie challenge consists of a secret list of foods used to prepare 1 to 3 items that will then be judged by a mix of local media, food writers and influencers. Celebrity Chef, Scott Commings, winner of Fox’s Hell’s Kitchen, season 12, and a local Henderson resident, will oversee the event with our emcee from Lotus Broadcasting’s 97.1 The Point, Lorrin Bond, who is a DJ and host.

As always, general admission to the Last Friday, JAWS Festival is complimentary, but there is also a VIP experience available at $30.00 per person with sponsored drinks by Helix Vodka and a complimentary food and dessert ticket from a participating food truck or foodie pop up.

Last Friday was founded to resurrect and celebrate the community’s emerging arts and culture and sponsored by The City of Henderson and a few other deep seeded Henderson community driven partners such as Las Vegas Weekly and Findlay Las Vegas Volkswagen. This month, our presenting sponsors are Levi’s, Life Time Athletic and the M Resort. Levi’s has a massive distribution facility located in Henderson, Nevada and strong ties to the Silver State. Levi Strauss originally partners with a Reno, Nevada man and with that the brand was built. M Resort is also scheduled to host the official Last Friday, Just Add Water Street After Party the same evening from 9:00 p.m. to 2:00 a.m. at the Ravello Lounge inside the resort with free admission, drink specials and a live band featuring music ranging from top 40 to the 80’s & 90’s.

Our charitable focus of Last Friday will benefit Vegas Strong. We will be selling $20.00 t-shirts provided by Lotus Broadcasting with 100% of proceeds going to the charity. SITE TO BUY SHIRTS: http://vegasstrongshirt.auction-bid.org. Raffles will also be available for $5.00 each with 100% of proceeds also benefitting the charity and a chance to win outstanding prizes from luxury handbags to tickets to a few of the top headlining performers coming to Las Vegas by our sponsor, House of Blues.

About City of Henderson
Incorporated in 1953, Henderson is Nevada’s second largest city with more than 302,000 residents. Henderson is a premier city, nationally recognized for its stunning parks, trails, master-planned communities, outstanding quality of life and patriotic past. Recognized as one of America’s Best Places to Live (MONEY and Liveability.com), one of America’s Best Cities (Business Week), one of the top six safest cities in America (Forbes, InsuranceProviders.com, Law Street Media, Movato.com), and a Bicycle Friendly Community (League of American Bicyclists), Henderson is a progressive and vibrant city committed to maintaining premier amenities and services for all who choose to live, learn, work and play in Henderson…a place to call home.

About Last Friday, Just Add Water Street
Last Friday is a community-centric initiative to inspire an ongoing effort between all sectors of Henderson both private and public with the historic Water Street District in the City of Henderson for the betterment of sustainable community growth while giving back. We look to cultivate and create a community driven, family-friendly event that inspires meaningful relationships and opportunities for all. Our plan is that Last Friday, Just Add Water Street aligns with those organizations, groups, and individuals who are engaged across all Southern Nevada for the betterment of creating a diverse yet meaningful experience. Visit www.justaddwaterstreet.com. Follow Last Friday on Facebook at www.facebook.com/justaddwaterstreet, Instagram @LastFridayHenderson, and Twitter @_justaddwaterst #JAWSNV