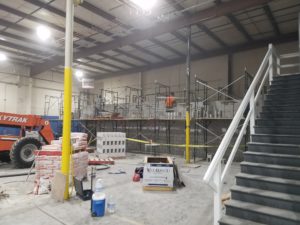 DAYTON, Nev. – RTP Company, a global manufacturer of thermoplastic molding compounds, is preparing to reopen its Dayton facility, which has sat largely empty since the company shuttered the plant in 2001. The plant is scheduled to open near the end of 2017.

Greg Whitten, the plant manager for the RTP Company’s Dayton facility, said the company is rapidly expanding and estimates the Dayton plant will initially look to hire 25 employees.

“We are a totally diversified, privately owned company with 19 manufacturing facilities worldwide,” he said. “We manufacture thermoplastic molding compounds used in applications including military/aerospace, electronics, automotive parts, appliances, medical, oil and gas drilling, and most likely anything else you can think of. If it uses thermoplastics, we can tailor a compound to meet the requirements of the application.”

About 50 local workers have been deployed on the project through various sub-contractors’ companies.

“RTP is a great example of how companies are reinvesting in Northern Nevada,” Jeff Shaheen, co-founder of Shaheen Beauchamp Builders, said. “We are pleased to use local companies and workers on a project that will put even more locals to work. It’s a win-win for the region.”