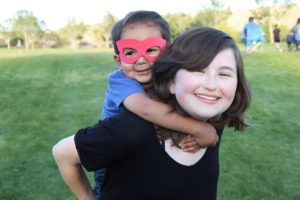 Every day local children face their battle with cancer with fearlessness and a brave front for their families. To recognize these kids, the Candlelighters Childhood Cancer Foundation of Nevada names special ambassadors each year for its annual Superhero 5K with Chet Buchanan race and festivities, which is Saturday, Sept. 9 at the Mountain’s Edge Master Planned Community.

The Superhero 5K brings these inspiring children, their families, event participants and community supporters together for a fun morning that’s become the nonprofit agency’s biggest event of the year and major fundraiser. It allows Candlelighters to provide children with cancer and their families with needed help through a variety of emotional assistance, quality of life and financial support programs.

Kaila Elder, 13, and Benji Sanchez, 3, were selected as Superhero Ambassadors. Lucas Ahlbach, who was 10 years old when he lost his battle with cancer, is the event’s Angel Ambassador. They’re being honored for their courage, spirit, and bravery in dealing with cancer and serving as inspirations for those around them and others battling the deadly disease in all its forms.

Kaila’s battle began in November 2014 after complaining about a small mass in her nostril. By January 2015, she was diagnosed with Embryonal Rhabdomyosarcoma, a soft tissue cancer. She subsequently underwent multiple surgeries, weekly chemo treatments, radiation, and pneumonia twice, but kept her smile and upbeat attitude. Kaila finished treatment in December 2015 and is now in remission, back in school and giving back to those who helped her by creating and donating artwork to raise money for various charities, including Candlelighters. Superhero 5K participants raising $100 will receive a T-shirt designed by Kaila.

Nine-month-old Benji had a series of mini seizures and was rushed to the emergency room. A mass had taken over 33 percent of his brain, and surgery quickly followed. Two weeks later, his family was informed of the malignant Choroid Plexus Carcinoma diagnosis. Always happy, Benji continues his battle against cancer. He enjoys skateboarding, baseball, playing outside and soaking up every moment he can spend with his family.

Angel Ambassador Lucas also enjoyed being with friends and family and making people laugh. He loved soccer, and his favorite professional sports teams were the Green Bay Packers and the Golden State Warriors. His memory continues to inspire others.

To honor the ambassadors and support Candlelighters and others battling cancer, sign up to race or walk, cheer on participants and dress up as a superhero. The Superhero 5K takes place at Exploration Park in Mountain’s Edge. The 80-acre park is located at 9275 S. Buffalo Drive, just south of Blue Diamond and the master plan’s entrance.

Other activities will include a kids area with a bounce house and games, bone marrow drive hosted by Be The Match©, awards ceremony for timed runners, food, kids zone with jump houses, refreshments and raffle prizes. Attendees also can enjoy t Exploration Park amenities.