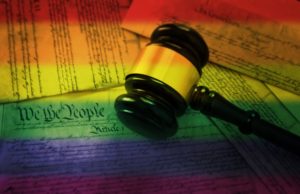 (Reno, Nev.) – The National Council of Juvenile and Family Court Judges (NCJFCJ), in partnership with the National Juvenile Defender Center and the State Justice Institute, recently released two bench cards: one with principles and best practices to ensure that LGBTQ-GNC people in the courtroom are treated with respect, and one addressing adolescent development in delinquency proceedings.

“Judges are ethically obligated to promote access to justice for all, regardless of race, ethnicity, gender identity, sexual orientation or religion,” said Judge Jay Blitzman, Middlesex Division of the Massachusetts Juvenile Court, who helped draft the bench cards. “With the NCJFCJ’s endorsement of this bench card, it allows us, as judicial leaders, to model good behavior for ourselves, our court personnel, members of the public including the children and families whom we serve.”

The SOGIE bench card encourages judges, and all those subject to the judge’s direction, to be free from personal and extracurricular biases while promoting access to justice for all. It outlines unique considerations at every stage of the case including to: not make assumptions regarding sexual orientation or gender identity; be mindful of the unintended consequences of “outing” a child; supporting an individual’s expression of gender identity by using their preferred name and pronouns of choice; allow transgender and gender non-conforming people to wear clothing that matches their gender identity and expression; among others.

It also outlines recommendations and considerations for specific stages of the case, understanding LGBTQ-GNC terminology, and encourages training and education for judges to ensure all treat LGBTQ-GNC people in the courtroom with respect.

“In many cases for LGBTQ-GNC youth the last stop before hope is lost is the courtroom. Disproportionately represented in the juvenile justice system by the time they come to court these youth may have experience bias and prejudice at home, school and community,” said Judge Ramona Gonzalez, La Cross County Circuit Court. “How a judge speaks to and engages with a youth will not change past adverse experiences but it can be a new beginning where respect, hope, and justice thrive.”

Applying principles of adolescent development in delinquency proceedings encourages judges to understand and learn the developmental differences between youth and adults, and must consider them in judicial decision-making and interactions with youth in court.

“Youth are different from adults and young children are different from older teens,” said Melissa Sickmund, Ph.D., director of the NCJFCJ’s National Center for Juvenile Justice. “The way we understand their behavior and our response to their needs must take those differences into consideration. This bench card gives specifics on how to do that and still hold youth accountable.”

Research shows that adolescents are not just small adults, but are constitutionally different. Adolescents are less culpable and more capable of reform than adults, and are therefore less deserving of the most severe punishments. Adolescents also develop at different rates in social, emotional, physical and cognitive domains.

This bench card outlines key principles and research on adolescent development that judges should consider and integrate at each stage of a child’s case. Important judicial considerations and practical guidance is offered to help judges translate those principles into practice in the courtroom, which includes sample questions and colloquies that can be utilized in judicial decision-making and interactions with youth in court.

“These bench cards are essential tools to assist juvenile and family court judges and ensure developmentally appropriate, bias-free courtrooms that strengthen a child’s likelihood for success,” said Mary Ann Scali, executive director of the National Juvenile Defender Center. “The NCJFCJ’s endorsement of these cards encourages strong on-the-bench judicial leadership to improve outcomes and increase youth understanding of the court process while ensuring everyone in the courtroom is treated with dignity and respect.”

The NCJFCJ Board of Directors voted to support and endorse the policies and practices outlined in these two bench cards during their July 2017 annual meeting.

“These resources are part of a line of important informational and policy statements from the NCJFCJ,” said Judge Anthony (Tony) Capizzi, NCJFCJ president. “Judges and judicial leadership play a critical role in both ensuring that courts and justice professionals recognize the developmental differences, supported by the research on adolescent development, between youth and adults and to treat LGBTQ-GNC individuals with fairness, dignity, and respect.”