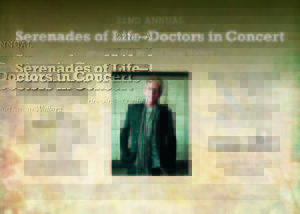 LAS VEGAS – The former lead guitarist from The Eagles, Don Felder, will be joining the stage with talented Southern Nevada medical community members this fall to raise funds for the non-profit Nathan Adelson Hospice. Felder will perform his popular hits during the “Serenades of Life – Doctors in Concert” event, being held on Friday, Oct. 20.

The event, presented by Bill and Susan Walters, will begin at 6:45 p.m. at The Smith Center for the Performing Arts, with doors opening at 6:15 p.m. Ticket prices vary from $39 to $175 per person. To purchase tickets, call The Smith Center Box Office at 702-749-2000 or visit the website at www.thesmithcenter.com. More information is also available by calling Stephanie Forbes at Nathan Adelson Hospice at 702.938.3910.

“We are truly honored to once again bring Serenades of Life to the community,” said Carole Fisher, president and chief executive officer of Nathan Adelson Hospice. “It’s a very entertaining evening that showcases impressive talents, all while supporting our non-profit hospice.”

Proceeds from the concert support The Bonnie Schreck Memorial Complementary Therapies program at Nathan Adelson Hospice. The program improves the quality of life for the hospice’s patients and loved ones and eases emotional and physical discomfort. Patients and their loved ones may request various therapies such as Pet Therapy, Reiki Energy Work, Message Therapy, Art Therapy, Reflexology, and Aromatherapy.
News 3 Las Vegas anchor Dana Wagner will serve as Master of Ceremonies, with a special appearance by Actor/Comedian Brad Garrett. Kelly LeGrow of Brown and Brown Insurance of Nevada will also receive the annual Brad Garrett Humanitarian Award at the event.

About Nathan Adelson Hospice
Nathan Adelson Hospice, the trusted partner in hospice care and palliative medicine for almost 40 years, is the largest non-profit hospice in Southern Nevada, caring for an average of 400 hospice and palliative care patients daily. In 1978, Nathan Adelson Hospice began providing home care hospice service in Southern Nevada with the mission to offer patients and their loved ones with comprehensive end-of-life care and influence better care for all in the community. In 1983, Nathan Adelson Hospice opened an in-patient hospice in Las Vegas, and today the hospice is recognized as a national model for superior hospice care. The mission of the hospice is to be the Hospice of Choice, the Employer of Preference and a Training Center of Excellence for a comprehensive end of life care. Its vision is simple: no one should end the journey of life alone, afraid or in pain.

About Don Felder
Don Felder is renowned as a former lead guitarist of The Eagles, one of the most popular and influential rock groups of our time. A member of The Rock and Roll Hall of Fame since 1998, Felder served as a member of The Eagles for 27 years, putting his mark on numerous Eagles milestones. Felder originated the music and co-wrote The Eagles’ biggest hit – the iconic, Grammy-studded smash “Hotel California” – along with fan favorites like “Victim of Love” and “Those Shoes.”

After leaving the group in 2001, Felder also became a New York Times bestselling author when his riveting confessional memoir Heaven and Hell: My Life in The Eagles proved a major commercial triumph upon publication in 2008. Growing up in the Gainesville, FL local music scene, Don Felder would incongruously encounter a number of the greatest talents that would go on to change rock and roll history. Florida is also where a young Felder would first meet Bernie Leadon, a founding member of The Eagles who would be instrumental in bringing his childhood friend into the band. In fact, it was Leadon who encouraged him to come out to Los Angeles, where Felder found himself working both with The Eagles and in both sessions and live performances for numerous music legends spanning the musical spectrum: The Bee Gees, Bob Seger, Michael Jackson, Alice Cooper, Kenny Loggins, David Crosby, Graham Nash, Boz Scaggs, Warren Zevon, Joni Mitchell, Stevie Nicks, Vince Gill, Stevie Wonder, Elton John, Paul Simon, Diana Ross, Barbara Streisand – and even and old friend, Steven Stills.