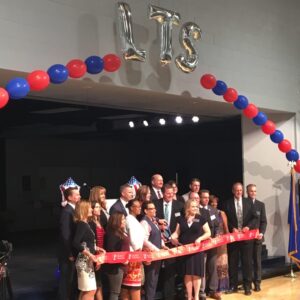 Legacy Traditional School – North Valley is welcoming 1,260 students for the 2017-2018 school year. Many of those students, and their families, attended Tuesday afternoon’s ceremony before they proceeded to the school’s first Meet the Teacher night.

“It was exciting to meet so many of our new students this evening, and welcome them and their families to our school. We’re looking forward to watching them learn and grown this year.” said Tom Ellis, principal of Legacy Traditional School – North Valley.

The new $20 million campus, which was completed by Las Vegas-based Burke Construction in six months, boasts 80,000 square feet that houses 41 classrooms, offices, a cafeteria, and a gym. The campus also includes athletic fields and playgrounds.

“We are thrilled to welcome Legacy Traditional School to our city, not only to serve our residents and the many families moving into North Las Vegas but as a resource for children across the valley,” said North Las Vegas Mayor John Lee, who shared remarks during the ceremony. “Legacy will instill in students a strong educational foundation and a love of learning that will help grow our workforce and ensure that our region continues to succeed.”

The new charter school employs a staff and faculty of 90.

“We’re looking forward to being able to contribute to North Las Vegas as both a premier place to recieve an education, and a premier place to work,” said Aaron Hale, executive director and co-founder of Legacy Traditional Schools. “Our expansion into Nevada has opened the door for us to provide an unparalleled, A-rated education for our students in this community, and we are happy to be a part of North Las Vegas, and soon, Henderson.”

Founded on the principle that school choice should not rely on affordability, Legacy Traditional Schools are tuition-free public charter schools.

The new North Las Vegas campus is Legacy’s 13th school, and is the first campus to open outside of Arizona. Plans are underway for Legacy Traditional Schools’ Henderson campus.

Legacy Traditional Schools is Arizona’s largest and highest-quality network of public K-8, tuition-free charter schools. Legacy is “A-rated” by the Arizona Department of Education. It is internationally accredited by AdvancED, a non-profit, non-partisan organization that conducts rigorous, on-site external reviews of PreK-12 schools and school systems. Legacy Traditional Schools was founded in 2007 and based on a neoclassical, back-to-basics curriculum combining academic rigor, athletics and the performing arts. Legacy Traditional Schools builds patriotism, character and self-sufficiency in its students and advocates parents to be involved in their children’s learning. Campuses in Arizona are located in Avondale, Casa Grande, Chandler, Gilbert, Glendale, Laveen, Maricopa, North Chandler, Peoria, Queen Creek, Northwest Tucson and Surprise. Learn more at legacytraditional.org.