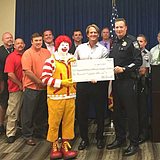 The donation, which will help provide financial assistance to local police officers and their families in the event of an injury or death that occurs in the line of duty, were the proceeds of an annual fundraiser to support the IPOF.

This year, the local McDonald’s owner/operators committed to donate the proceeds from the sale of every McCafé beverage sold during National Police Week. During that time, McDonald’s restaurants throughout southern Nevada hosted law enforcement personnel from multiple jurisdictions, including the Las Vegas Metropolitan Police Department, Nevada Highway Patrol, Henderson Police Department and the North Las Vegas Police Department to participate in the fundraiser.

Now in its fourth year, the IPOF fundraiser started in June of 2014, when McDonald’s restaurants in southern Nevada held a one-day fundraiser following a shooting in North Las Vegas. The money raised went to support the families of fallen officers Alyn Beck and Igor Soldo, as well as civilian victim Joseph R. Wilcox.