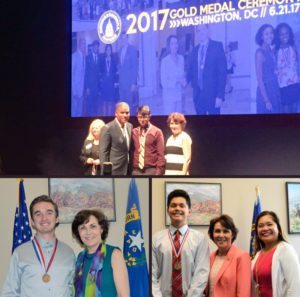 The Congressional Award is the United States Congress’ recognition of young students in America. Students between the ages of 14 and 23 register for the program and can earn bronze, silver and gold certificates or medals. Each reward level is determined by goals set in four areas: Voluntary public service; personal development; physical fitness; and expedition/exploration. The minimum requirement for a student to achieve a gold medal is 400 hours of voluntary public service, 200 hours of personal development, 200 hours of physical fitness, and five consecutive days and four consecutive nights of expedition/exploration — all completed within 24 months.

“This is truly a remarkable achievement for three of our Las Vegas area students, and we are proud and excited for them as they continue on this successful educational journey,” said CASLV Executive Director Ercan Aydogdu.

Coral Academy of Science Las Vegas encourages all its high school students in the College Leadership and Mentorship Program to register for The Congressional Award Program.

Coral Academy of Science Las Vegas is a K-12 state-sponsored tuition-free public charter school with an emphasis in the areas of math, science, and technology. The school was designated as a high achieving school by the Nevada Department of Education two years in a row and successfully participates in many academic competitions, such as Science Olympiads, Science Fairs, statewide Science Bowls, Math Counts, and Lego Robotics. Coral Academy of Science Las Vegas is ranked as the 6th best and most challenging high school within Nevada according to the US News and Washington Post. www.caslv.org.