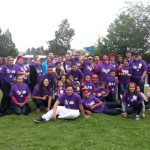 It’s time to tie up your shoelaces and prepare to walk or run in the Reno Hemophilia Walk & 5K to support the inherited bleeding disorder community in northern Nevada. The 1-Mile Walk & 5K Run will take place on Saturday, September 16, 2017 at Bartley Ranch Regional Park, 6000 Bartley Ranch Rd., Reno, 89511.

Registration is now open at www.hfnv.org. On the day of the walk/run, registration and check-in start at 9 a.m. at the Bartley Regional Park Plaza Pavilion. The walk and run begin at 10 a.m. Afterwards, attendees can enjoy a barbecue, activities and a team t-shirt contest.

A majority of the funds raised through the walk will be used to send children with inherited bleeding disorders — along with siblings — to a special, medically supervised summer camp at no cost. Camp Independent Firefly offers kids the chance to interact with others like themselves, and to feel supported while also learning independence in how they live with their life-long condition, for which there is no cure.

“Camp Independent Firefly is a wonderful asset because it offers these kids the kind of freedom they usually don’t have,” said Anne McGuire, Chapter Events Manager for the Nevada Chapter of the National Hemophilia Foundation. “So often, kids with inherited bleeding disorders are discouraged from being too active due to concerns about their safety or causing a possible bleed. With medical staff on-site the entire week, Camp Independent Firefly is a safe and uplifting place filled with adventure.”

More than 20,0000 families in the United States are affected by inherited bleeding disorders
Those with inherited bleeding disorders lack a protein that allows their blood to clot normally
To control bleeds, a medicine called factor is often infused
Hemophilia is most often passed from mother to son, but girls can also be affected
Von Willebrand disease affects males and females equally
One percent of the population is affected by von Willebrand disease, but one in 50 people may not know they have it.