You are here: Home / Features / Building Nevada / Office in Nevada: A Perspective Shift 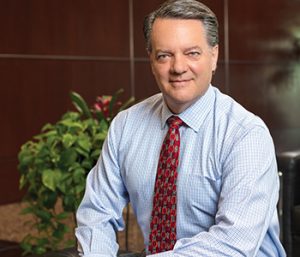 Nearly a decade after the recession left yawning vacancies in office properties across Nevada, buildings are finally beginning to fill. Whether the rising occupancy justifies speculative new development — particularly in the Las Vegas area — remains an open question.

Applied Analysis estimates the office vacancy rate in Southern Nevada stood at 19.8 percent in the first quarter. That could mean the glass is half full.

The vacancy rate peaked at 25.3 percent about four years ago, and it has been steadily declining ever since. Tenants have been occupying more office space — “absorption” in the terms of brokers and developers — than they’ve been vacating for 16 consecutive quarters.

The vacancy rate in Southern Nevada is now about 5 percentage points better than it was a couple of years ago.  As a result of the tightening market, landlords today are making fewer concessions in their negotiations with tenants, said Phillip Ralston, president of Henderson-based American Nevada Company.

Or the glass might be half empty.  At the height of the pre-recession boom in late 2005, vacancies in the Las Vegas area dropped as low as 7.8 percent.

Meanwhile in Northern Nevada, Dickson Commercial Group’s most recent survey of 200 top office buildings found a vacancy rate of 11.58 percent early this year, down a tick from 12.57 percent at the end of last year. At the depths of the recession, vacancy rates in Northern Nevada topped 20 percent.

Demand is strong, rents are rising and landlords no longer are willing to make concessions in office buildings along freeways such as the I-215 corridor, Broadhead said.

But landlords in older office properties — those along East Flamingo or East Sahara — struggle to keep their buildings full even as they cut rents and offer incentives to woo tenants.

“The Class A market is outperforming everything else, especially if it’s along a freeway in a good location,” Broadhead said. Those locations have accounted for more than 70 percent of the recent absorption of office space in the region, and rents in many buildings have risen by 25 to 30 percent in the past couple of years.

The key driver in the office market is growth of employment. Brian Gordon, principal of Applied Analysis, explained that the jobs recovery in Southern Nevada has begun percolating to the office sector.

Manufacturers and logistics companies have driven much of the recovery, but they typically don’t need a lot of office space. However, as new manufacturing and logistics workers need professional services — everything from dentists to accountants — demand for office space will continue to strengthen, Gordon said.

The arrival of big employers — Tesla, Apple — is having a similar effect in the Reno-Sparks area, said Shanks.  Northern Nevada is getting a further boost from the arrival of technology companies, many of them still small, that are leasing a few thousand square feet here and there around town.

In the past 12 months, the fields that typically need a lot office space — professional and business services, education and health services — posted a 4 percent increase in employment in Southern Nevada.

Employers learned to do more with less during the recession, and the number of workers answering phones and filing paperwork dropped dramatically. But those jobs are bouncing back. The number of administrative positions in Southern Nevada organizations — another good way to measure the need for office space — posted an 8.2 percent growth in the past 12 months, Gordon says.

The recovery in office jobs has been accompanied by recent construction activity, mostly single-tenant buildings. Among the companies building their own office buildings in the Las Vegas market have been Credit One, UFC, the Greater Las Vegas Association of Realtors and MountainView Hospitals.

Speculative development, however, hasn’t perked up much since coming to a near-standstill during the recent recession, and Gordon doesn’t expect to see speculative construction come back to life until vacancy rates fall even further.

“The right projects at the right locations will continue to be sought out, particularly as Class A availability continues to tighten,” he said.

An office-construction market that’s heavy on creation of buildings for specific users and light on speculative projects should help keep the market from getting ahead of itself, Applied Analysis noted in a recent report.

Broadhead believes, however, that this is the time for new speculative development to begin stirring. He said current trends should drive vacancy rates below 10 percent in high-demand locations within the next year or so, dictating the need for new development to begin moving forward now.

“We’re in a good place right now, but we’re going to run out of good product,” he said.

Vacancy rates in the Reno-Sparks area already have reached the 10 percent level that gets developers out on the dance floor, and Shanks notes that some tenants appear willing to pay the rents of $2.75 a square foot that would be necessary to support new development. Generally, full-service office rents in top-tier buildings in the Reno area run at least $2 a square foot.

“We’ve been saying that whoever builds first will win,” Shanks said.

He added the market is particularly tight for larger, top-quality spaces in downtown Reno, where the last major construction — Museum Tower — was completed in 1987. McKenzie Properties started work on a 40,000-square-foot building at Reno’s Mountaingate, the first speculative office building in the city since 2008.  Office space will be developed, too, in the Park Lane and Rancharrah projects.

In Las Vegas, the lenders who have been gun-shy about financing new speculative office projects since the recession are beginning to see how construction can pencil out, Broadhead explained.

Rents in Class A buildings in the Las Vegas market average $2.55 a square foot in this year’s first quarter. That is up only 3 cents from a year earlier.

In part, Ralston says the lack of growth in office rents reflects the competition between Las Vegas and other cities in the Southwest to land significant new employers who need a lot of office space.  Unless rents grow across the region, Las Vegas can’t afford to get far in front of competitive cities.

Not long ago, Broadhead said, tenant-improvement costs generally were in the range of $55 to $60 a square foot. Now, they more commonly run $75 to $85 a square foot.  For even a modest 5,000-square-foot office, that represents a difference of as much as $150,000 before the space is occupied.

But rents are solidifying enough that some landlords are cautiously beginning to buy existing buildings with plans to reposition them to meet needs in the current market, Ralston said.

Prices for existing buildings are getting some support, too, from the return of major institutional investors such as pension funds. In their eyes, Las Vegas is a secondary market and didn’t get a lot of attention as they focused on major cities in the past few years. But now some institutions see value in well-placed office assets in secondary markets, and they’re looking around for good deals, said Ralston.

That dynamic created a big splash in Reno this spring, when Universal Health Realty Income Trust — one of those institutions — sold a 190,754-square-foot building across the street from Saint Mary’s Medical Center for $66.5 million, or more than $348 a square foot. The buyer is a real estate investment trust organized by American Healthcare Investors and Griffin Capital, both based in Southern California.

Changing types of office users and evolving trends in office design continue to challenge building owners and designers. Take a look, for instance, at the growing importance of call centers as office tenants in the Las Vegas area.

“Our market is a good market for call centers because they match up well with the profile of our labor force,” said Broadhead.

However, Ralston noted that call center tenants often reflect the growth of  “densification” — the creation of office environments that devote less square footage to each employee. In recent years, Ralston explained, companies typically would count on five to seven employees per thousand square feet of office space, and developers would set aside space for parking accordingly.  But call centers and other users today figure on 10 or 11 employees per thousand square feet of space.  As a result, employment growth doesn’t drive office development as quickly as it did in the past.

Currently, each office-using employee occupies approximately 110 square foot in Southern Nevada.  That same figure stood at 129 square feet per employee at the start of the Great Recession, said Gordon.

Of more immediate concern to many building owners, Broadhead said the advent of densification comes down to the seemingly mundane matter of parking requirements. Tenants who squeeze more workers into existing spaces need more parking — and many existing office buildings were designed with less parking.

“The big-office designs are a thing of the past,” says Broadhead.

For all the publicity that has accompanied new types of office use — shared spaces, the growth of a remote workforce —anecdotal evidence suggests that the Las Vegas market isn’t converting traditional office spaces into alternative arrangements at a fast clip, says Gordon. He expects that the impacts of innovative offices will remain modest in the immediate future.

“Creative spaces designed for collaboration work well for certain business models, but not all,” Gordon said.

Shanks said tech companies are at the forefront of tenants opting for creative office spaces in Reno — fewer private offices, more collaborative spaces. The attention to detail in those offices, however, generally means that tenants spend just as much on offices with lots of open space as they previously spent on private offices.

And the cool, collaborative spaces aren’t all that common around Reno anyway. “Reno is a very a traditional office market,” said Shanks.

While the office market has seen improvements in recent years, it’s slow going in Nevada. Both the northern and southern ends of the state have experienced an uptick in rental rates and a decrease in vacancy but development isn’t moving as fast as some might like. According to experts, time will tell for Nevada’s office market and changing users will have a big impact for the Silver State.