You are here: Home / Features / Feature Story / Diversity & Inclusion in the Workplace: Why and How 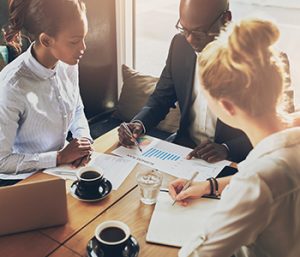 Many Nevada businesses are making an effort to hire a diverse workforce: people of different races, age groups, national origins, backgrounds and religions. Some are interested in hiring workers with disabilities and in giving women a chance to compete for typically male-dominated jobs. The impetus for these initiatives may come from recognizing that federal and state laws prohibit businesses from discriminating against anyone in what they describe as a “protected class.” However, once businesses begin to diversify their workforce and include many types of employees, they are discovering that the practice has many benefits, not only for their workers, but also for the company’s bottom line.

What Does the Law Require?

A number of federal laws have been enacted to protect the rights of workers and those seeking employment. The first landmark legislation, the Civil Rights Act of 1964, was followed by other statutes, including the Age Discrimination in Employment Act, the Americans with Disabilities Act, the Equal Pay Act, the Uniformed Services Employment and Reemployment Rights Act (USERRA) and several others.

Dora Lane, a partner in the Reno office of the law firm of Holland & Hart, noted that these laws and their Nevada counterparts are intended to protect employees and job applicants from discrimination based on race, national origin, religion, color, sex, age, disability, pregnancy, sexual orientation and other attributes. Lane, who has specialized in labor and employment law for 13 years, said Title VII of the Civil Rights Act is the most commonly used statute by people filing claims of discrimination because it is so broad-based.

Kara Jenkins, Nevada Equal Rights Commission (NERC) administrator, said employers may believe that because Nevada is a “right to work” state, federal employment laws don’t apply to them. “Nevada law mirrors federal law in most cases,” she pointed out. “You can’t treat people differently if they are in one of the classes protected by federal law.”

When advertising for a job opening, Lane advised employers to stay away from expressing a preference against a particular class or a preference for people outside that class. For example, running an ad that says, “Looking for an attractive lady to serve as a receptionist” is excluding men. An ad seeking “young, energetic salespeople” would be discriminating against older applicants.

Developing a workforce that includes many different types of people starts with looking outside your company’s normal job-search channels. Mike Bolognini, vice president and market leader for Cox Communications in Las Vegas, said the national Cox organization has a talent acquisition team to provide consistency in hiring practices and keep the company’s focus on diversity and inclusion. They post job openings on a number of websites, including those aimed at employment for women, minority groups and veterans. Cox employs about 18,000 people across the country, and Cox Communications has 1,500 employees in Southern Nevada. However, Bolognini noted that smaller employers can also take advantage of these online resources.

“All businesses, regardless of size, should make an extra effort to go to some of these sites to get a broader base of applicants,” he said. “In addition to online searches, you can contact organizations in your area, such as the Urban League, the National Association of Asian Americans, LULAC (the League of United Latin American Citizens), and others. Find out about their local chapters, introduce yourself and let them know about job opportunities.”

Once a company has a pool of job applicants and is ready to start making hiring decisions, it’s important that hiring managers learn what can and cannot be asked on a job application and during an interview. NERC has a pamphlet for employers spelling out some of this language, but in general, Jenkins said, “Make sure questions are tailored to essential job duties and to whether this person can do the job. Questions shouldn’t be about anything personal.” Even an innocent question such as, “Where were you born?” may trigger a discrimination claim by someone born in a foreign country. Asking for an applicant’s age or birth date on an application may be interpreted as a form of age discrimination.

“Savvy employers use behavioral questions about past actions during an interview,” said attorney Lane. “Instead of asking applicants what they might do in a hypothetical situation, ask them to describe what they did do at a previous job.”

Bolognini said when Cox gets to the final stage of hiring, a panel interviews the applicant. Each member of the panel asks a standard set of questions, and all candidates are asked the same questions. A hiring manager then makes the final decision. All documents are retained by the HR department in case there is an inquiry later about what happened during the hiring process.

The Americans with Disabilities Act (ADA) defines a disability as any condition that “substantially limits a life activity.” The ADA and its Nevada counterpart (NRS 613) apply to employers that had 15 or more employees in at least 20 weeks in the current or preceding year. It requires employers to make a “reasonable accommodation” for people with disabilities.

ADA regulations are aimed at leveling an unequal playing field. Lane said, “Most laws require you to treat everyone the same, but when dealing with a person with a disability, it’s just the opposite. The rationale is that they are not on an equal footing as everyone else, so treating them like everyone else is actually disadvantaging them.”

The law requires employers to evaluate each situation on a case-by-case basis, determining whether they are able to perform the essential functions of a job, either with or without accommodation. If a company can make adjustments that enable the employee to perform their job without causing undue hardship to the company, then it is required to do so. For example, if the person cannot go up and down stairs, they might be provided a ground-floor office. A person for whom bright lights might trigger seizures could be allowed to dim the lights in their workspace.

However, Lane pointed out, “If an accommodation causes an undue burden on the employer, it’s not ‘reasonable’ under the law.”

In addition, the ADA does not require employers to excuse people from performing an essential job function. If the job requires an employee to lift 50 pounds several times a day, and their doctor has advised them not to lift anything over 10 pounds, they cannot be reasonably accommodated. Jenkins advised employers in this situation to make a good-faith effort to find another position in the company that the disabled person might be able to fill. “If an employee develops a disability, they can still be a valuable team member,” she said. “You’ve invested in that person, and they should not be disposable.”

Once people of different backgrounds start working together, it’s easy for misunderstandings and prejudices to surface. “We all have biases,” said Jenkins. “Maybe you’ve never encountered someone who prays three times a day, who has a disability or whose first language isn’t English. What helps is training on Title VII, and also sensitivity training. You need a strong HR department to handle issues that come up when different types of people are working together.”

NERC has trained more than 5,000 people in the past two years, and Jenkins reported that both employers and employees are very receptive to the training, which is provided at no charge.

Lane noted that diversity is more than just tolerating each other’s differences – it’s about inclusion and learning to work side-by-side. “People from the same backgrounds tend to stick together and form cliques, which can develop into an ‘us vs. them’ situation within the company,” she said. Employers who succeed with diverse workplaces try to break up cliques and encourage employees of different backgrounds to work with each other on teams or committees.

Lane stressed the importance of having a written policy that not only states the company’s prohibition against discrimination and harassment, but also explains how employees can report a concern before it escalates into a problem. The policy should outline procedures for filing a complaint and explain that matters will be held confidential as much as possible.

“Don’t just write it on page 373 of the employee manual,” she said. “Train people on it and let them see that you’re actually putting it into action.” She explained that this can also give employers legal protection. “You’ll be better able to defend yourself if you have a written policy and train on it, enforce it and investigate complaints.”

Increasing employees’ confidence in the company and its processes can encourage them to report their concerns to management so they can be resolved before the employee complains to NERC or to an attorney. “Many times people sue because they feel they are not being taken seriously,” said Lane. “Listening to their concerns, acknowledging their frustration and letting them know what corrective actions you’re taking can help resolve issues before they become real problems.”

Cox Communications has an open-door policy for complaints that’s reviewed with employees every year, according to Bolognini. It encourages them to report any concerns to their immediate supervisor, but they can also go to any leader in the organization. They also have an anonymous ethics hotline that goes to a third-party company.

Cox Communications trains all employees on respect and on dealing with people who are different from them. It also offers very specific training for managers who must attend a class on equal employment opportunity.

“We train our leaders to recognize the signs of discrimination, whether in their area or somewhere else in the company,” he said. “If they spot something, we want them to feel empowered to pull an employee aside and warn them about their behavior, even if what they’re doing may not be illegal. That employee may not realize what they’re doing or saying is against our policy. We want leaders to get ahead of the situation and defuse it before it gets worse.”

Lane said an important part of protecting against legal problems is to keep records of all interactions the company has with its employees. “If someone has performance issues, write them up and document it in their file,” she said. “If there’s nothing in their file but positive evaluations, you can’t prove why you fired them, and you’re opening yourself up to legal issues.”

Jenkins said retaliation claims are one of the most common reasons for people to file a complaint with NERC. “An employer can’t retaliate against someone for filing a claim, either with the company’s HR department or with NERC,” she said. “You are entitled to inquire about discrimination and to file a complaint if you believe you’re not being treated fairly. You shouldn’t be punished for it, whether that involves being passed over for promotion, left out of briefings or having your office moved to the basement.”

Bolognini said a diverse workforce helps Cox Communications better serve its customers. “The more our workforce mirrors our community, the more comfortable our customers feel about us as a business,” he said. “For example, at our location on Rancho Drive we have several Spanish-speaking staff members because many nearby residents speak Spanish. Our diverse workforce also helps with marketing efforts by helping us get our message across to various groups of people.”

Jenkins noted, “Diverse workplaces present amazing opportunities to grow your company by exchanging ideas with each other. People have more in common with each other than not. You don’t have to be best friends, but you do have to figure out a way to work together.”

Bolognini concluded, “Don’t be afraid of the hiring process. Learn what the rules are, do what you know is right and be consistent with your policies. If you really want to have a thriving business, diversity should be a basic part of your business model. It shouldn’t be an afterthought.”