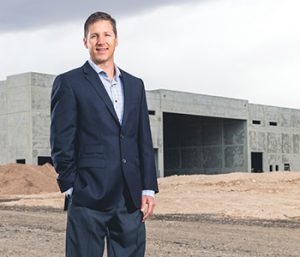 That sound that developers of industrial properties hear in the background is the ticking of the clock counting down the longest-lived economic recovery since World War II.

But although the ticks are growing louder, demand for space from new and expanding industrial companies keeps developers busy in Las Vegas and Reno alike.

The reasons for the boom are a well-told story: Northern Nevada’s great location for warehouse operations that can easily reach nearly all of the West. Southern Nevada’s proximity to Southern California markets. The entire state’s business environment that’s friendly by about any measure, and dramatically more friendly than nearby California.

Developers are jumping into the pool with both feet.

He notes that users occupied an additional 6 million square feet of industrial space in the region during 2016, and the market continues to be driven by new companies drawn to Reno’s attractive location as a distribution hub as well as Nevada’s strong business climate.

Prologis soon will begin construction on a 240,000-square-foot building in Reno’s North Valleys submarket, with completion projected for the fourth quarter.

Reno-based Dermody Properties, meanwhile, is busy with projects on both ends of the state.

“In the Boomtown area in west Reno, we are developing LogistiCenter at I-80, which is the closest Class A development to California in all of Northern Nevada, a real advantage to companies concerned about delivery times,” said Michael Dermody, the company’s chairman and chief executive officer. The company is currently building and leasing two 200,000-square-foot buildings in the park, which is planned to total 800,000 square feet.

On the north side of Reno, the company is developing two phases of LogistiCenter at 395. When fully built out, these two developments will total 2.8 million square feet. Some 99,000 square feet remains available in the first phase, and leasing is under way for 180,000 square feet in the second phase.

In Las Vegas, Dermody Properties expects to complete its 546,00-square-foot LogistiCenter at Las Vegas Boulevard in July. Leasing is under way.

Panattoni Development Company Inc. is focused on leasing and selling the 3.5 million square feet of industrial space the company recently built across Nevada, and the firm has tapped the brakes slightly on new construction this year.

As the company gets a better feel for the demand from industrial users during this year, it will begin moving forward with more land acquisition and construction plans for 2017 and 2018, says Doug Roberts, the Nevada and Arizona partner for the Newport Beach-based company.

“In this business, you make bets and then you find out whether you were right,” he says.

Other developers are finding success in the market for mid-sized industrial spaces.

Las Vegas-based Brass Cap Companies, for instance, has found a solid niche in mid-sized industrial spaces — 10,000 to about 40,000 square feet, says Jason Kuckler, a principal with the company.

The demand for light industrial space in southwest Las Vegas has pushed vacancy rates down to about 4 percent.

Harsch Investment also is focused on the middle of the market rather than big-box distribution tenants, says John Ramous, senior vice president and regional manager.

The vacancy rate in the company’s portfolio of 9.1 million square feet in the Las Vegas area is about 4 percent these days.

Ramous says demand for industrial space in Southern Nevada is driven largely by the organic growth of existing companies as well as the steady stream of companies moving to business-friendly Nevada from California and other states that are less welcoming. Colliers International finds that locally based companies accounted for about 38 percent of the industrial space leased in Las Vegas during 2016. Companies headquartered elsewhere accounted for the remainder.

To meet the demand from local firms as well as newcomers, Harsch just completed a 240,000-square-foot building at Henderson Commerce Center that’s targeted for tenants that need 17,000 to 60,000 square feet of space. It also has launched a three-building, 186,000-square-foot project at Henderson Commerce Center that targets light industrial and distribution tenants who need 3,000 to 20,000 square feet.

Particularly among developers of very large industrial buildings, the needs of e-commerce companies are getting increased attention.

Wyler says Prologis today designs most of its biggest new buildings with e-commerce users in mind. Those buildings typically need more employee parking than traditional distribution users — especially when they staff up for busy holiday seasons — and they usually require more robust electrical service to drive conveyors and other equipment. E-commerce buildings typically also are a bit taller — 36- or 40-foot clear heights rather than the 32 feet common in other new industrial buildings — and the additional height places greater demand on fire-suppression systems.

Dermody, whose company works with e-commerce tenants across the country, says the needs of that sector almost always play a role in his company’s planning.

“We develop buildings that are e-commerce compliant, but not e-commerce dependent,” he says. “We always strive to skate to where the puck is going to be.”

Ramous notes that the face of industrial development also is changing as some companies that traditionally leased office space now look instead to occupy lower-cost industrial spaces that provide substantial flexibility in their operations.

Prologis sees continued strong interest in sustainable development from its 5,200 customers globally, says Wyler. The company now routinely builds its projects to meet the standards established by the LEED program of the U.S. Green Building Council.

The rapid pace of industrial development in the Las Vegas and Reno markets may be sowing the seeds of its own slowdown as affordable raw land becomes more scarce.

In Las Vegas, Wyler says many of the best existing sites for industrial development have been picked over. Prologis has responded by looking over the horizon to sites that soon will be served by expanding infrastructure.

“We’re looking one exit into the future,” he says. For instance, Prologis created its I-15 Speedway Logistics Center in North Las Vegas to take advantage of the future Tropical Parkway exit from I-15.

Ramous says that development costs, including land, for some smaller-space projects now approach $150 a square foot, and rents don’t yet justify new development.

Rents haven’t risen as quickly as the costs of land and the costs of construction, says Roberts, and that’s causing some mild concern for industrial developers as they put a pencil to future projects.

“Our yields are going down,” he says. “I foresee construction pricing and land pricing remaining high. Our rents have got to increase.”

Kuckler says Brass Cap has seen that rents in some Southern Nevada submarkets have begun to rise — jumping by as much as 10 percent in some instances.

Rising rents offset some of the effects of the higher prices that developers are paying for land, Kuckler says. Higher rents also have encouraged Brass Cap to hold new buildings in its own portfolio, allowing the company to capture the higher rents itself, rather than selling new projects to one of the growing number of companies that want to purchase their own space.

The biggest challenge faced by industrial developers in the Reno area, Hughes says, isn’t just the rising price of land. They also need to find sites that are relatively flat and provide good freeway access.

Along with rising land costs, continued discipline by lenders — particularly their requirement that developers put more of their own money into projects — helps keep the market from getting too far ahead of itself, Dermody says.

Ramous explains that developers these days generally need to put equity of 25 percent to 30 percent into their projects — a far cry from the 15 percent requirements before the onset of the recession in 2008.

That’s enough of a difference to dampen some speculation without killing the market for industrial developers.

“While certainly more equity is required today, there are still a lot of large, financially capable developers willing and able to develop in the state,” Ramous says.

But financing may be loosening for some projects.

Kuckler says executives at Brass Cap Companies see signs that lenders that have been focused on multi-family developments now are shifting their attention to industrial projects instead.

Along with the costs of land, construction and financing, industrial developers also keep close watch on bigger issues.

A critical issue for industrial developers, Dermody says, is maintenance of the quality of life that allows their industrial tenants to attract and retain workers. That means, he says, that developers have a strong interest in community priorities ranging from good school systems to affordable housing to adequate transportation infrastructure.

As they plan for the second half of 2017 as well as 2018, industrial developers generally remain bullish on Nevada’s prospects.

“The trends are positive. The fundamental economic factors are positive,” says Kuckler. “We’re full-steam ahead for the next three years.”

But despite its geographic and political advantages, Nevada wouldn’t be immune from a slowing national economy. The current expansion is about eight years old, and the post-war average has been closer to six years.

Dermody, for one, says his company remains very cautious in its plans for further development.

“It seems reasonable to expect that things will slow down,” he says. “In this business, if you’re not worried, you’re not focused.”