You are here: Home / Features / Building Nevada / Nevada Land: Priorities for Today in Planning for Tomorrow 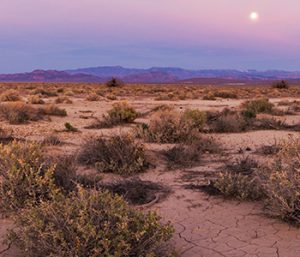 Protecting counties from restrictive federal land policies, potentially transferring U.S. government-owned land to the state, creating state parks. These and other current land matters in Nevada, some in the courts, some ongoing, many controversial, are numerous.

That is, in large part, because the state contains the highest percentage of federally owned and managed land, 87 percent, a quantity that’s equivalent to the size of Michigan, including land and water. Further, federal agencies own more than 90 percent of the land in five Silver State counties—Nye, Esmeralda, Lander, Lincoln and White Pine according to data from the Nevada Association of Counties (NACO).

These governmental owners and overseers include the U.S. Bureau of Land Management (BLM), U.S. Forest Service (FS) and U.S. Fish and Wildlife Service (FWS). The lands include national parks, forests, wildlife refuges, monuments and wilderness areas, such as the Desert National Wildlife Refuge in Las Vegas and Pyramid Lake, northeast of Reno.

Only 1 percent of Nevada’s total land mass is owned by the state itself, said Charles Donohue, state land registrar and administrator, Nevada Division of Lands. Those acres house state agencies and enterprises, including museums, the National Guard, wildlife sanctuaries and parks. The remaining 12 percent of Nevada’s land primarily is privately owned.

Land management is at the heart of many disagreements with federal agencies in charge of properties in Nevada.

“We want our public lands managed in a manner that will help sustain not only the environment but, also, communities and local economies. We believe that there needs to maximum engagement with county governments; counties should have a role and a say in how those lands are managed,” said Jeff Fontaine, executive director, NACO. NACO is a nonprofit, nonpartisan association that represents the collective interests of Nevada’s 17 counties and advocates on their behalf concerning federal matters. A major focus is public lands.

That’s because more than 57 million people now live within 25 miles of these types of acres and two-thirds of BLM-managed lands sit within 50 miles of an urban area, according to NACO’s “2015 Summit on Public Lands in Nevada” report.

Additionally, public lands play a significant role in Nevada’s economy. They support the outdoor recreational and tourism industries as places to visit and on which to hunt, fish, camp, view wildlife and more. More than 7.5 million visits to BLM Nevada recreation sites were made in 2015, according to agency statistics.

The BLM’s stated purpose involves balancing resource use, recreation and conservation. However, one issue is the status of the BLM’s Resource Management Planning, or Planning 2.0, rule, a revised methodology for how the agency develops resource management plans, which became final on Dec. 1. In late January, Sen. Dean Heller co-sponsored and introduced a measure to have Planning 2.0 be considered for invalidation under the Congressional Review Act. This would require Congress’ disapproval of the act within 60 legislative days signed by the president, or in the case of a presidential veto, passage by two-thirds of both houses.

In developing the new planning guide, the BLM aimed “to increase public involvement and incorporate the most current data and technology into our land use planning,” the “Planning 2.0: Improving the Way We Plan Together” document noted. Yet despite some changes to the original document, various entities remain displeased with the final outcome because its general, rather than site-specific approach would harm energy and mineral development, recreation and grazing on public lands.

NACO, for instance, believes that Planning 2.0 “erodes the right of local governments to interact with the BLM and provide necessary input and comments and further removes the act of planning for uses and maintenance of public lands to Washington D.C.,” Fontaine said.

Underway is a federal agency proposal to withdraw 2.8 million acres in Nevada from future mining for 20 years because they’re in sagebrush focal areas that contain sage-grouse habitats and populations. The State of Nevada submitted a counterproposal that would reduce the total withdrawn acres significantly. The period of public comment on the proposed amendment and the draft environmental impact statement is underway and ends March 28.

A lawsuit currently in the courts, brought by more than a handful of Nevada counties against the BLM and the FS, alleges the agencies didn’t consider local plans and conservation efforts when developing their land use plan amendments concerning sage-grouse habitats, which were approved in September 2015. Thus, the amendments are hindering development. For example, in the suit, Elko County asserted that it loses an estimated $31 million per year in agricultural, mineral and energy development and production.

Last month, Heller introduced the Greater Sage-Grouse Protection and Recovery Act of 2017, Senate Bill S. 273, which would allow states to implement their own specific conservation and management plans to protect greater sage-grouse populations and their habitats.

“The current heavy-handed sage-grouse plans needlessly impose restrictions on millions [of] acres of land in Nevada alone, threatening our western way of life while doing little to improve habitat. Our legislation allows western states the flexibility to choose the proper methods to improve the sage-grouse population while keeping Nevada’s economic stability and community needs in mind,” Heller wrote in a press release.

In another lawsuit, various environmental groups sued the FWS for its decision not to list the bi-state sage-grouse population segment as threatened or endangered. Five Nevada counties, represented by NACO, are intervening legally on behalf of the federal agency.

An ongoing, heated issue is the potential transfer of millions of acres of federal lands to the State of Nevada. House Bill H.R. 1484, the Honor the Nevada Enabling Act of 1864 Act, which Rep. Mark Amodei introduced in March 2015, proposed an initial transfer of 7.3 million acres, half within the checkerboard pattern along the Truckee River between Sparks and Wendover, the other half being property the BLM already has designated for disposal.

The lands would be used to support select beneficiaries, including all levels of public education; mental and medical health services; social, senior and veterans services; public programs for recovery plan development and implementation for candidate and threatened or endangered species; and “political subdivisions of the state, but only with respect to payment for services and infrastructure on conveyed identified federal lands that would otherwise be financed through property taxes or other revenues available to a political subdivision of the state,” the bill read.

With the second phase to have transferred millions more acres, passage of the bill eventually would’ve reduced federal agencies’ land ownership from about 87 to 75 percent, Amodei said. The resolution, however, died when the legislative session ended. Amodei represents Nevada’s second district, which is comprised of most of Lyon County, all of Churchill, Douglas, Elko, Eureka, Humboldt, Lander, Pershing, Storey and Washoe counties and Carson City.

Amodei may reintroduce the bill, he said, but first is meeting with various groups to discuss their concerns. Those include the potentials for loss of lands and access for recreation, higher taxes to pay for wildfire fighting and threats to wildlife. Also, the congressman is working on development of a map that clearly demarcates lands under transfer consideration.

“We’re in the process of getting as much input as possible to see where we go,” Amodei said. “The ultimate goal for each individual [land] bill is to reduce the amount of federal land in each county and increase the land use decision-making process to locally elected officials, communities and stakeholders—not by bureaucrats at the BLM or forest service.”

Currently, per legislation, regular BLM land auctions only take place in Southern Nevada, once in the fall and once in the spring annually, and in White Pine and Lincoln counties, once a year, Rose said. In April of last year, for example, the agency sold 856 acres in 40 parcels for $85.4 million, according to its Final Sale Matrix. A BLM Nevada executive was contacted for comments but declined an interview.

Each year, the federal government pays Nevada’s counties payments in lieu of taxes, or PILT, amounts meant to offset their expenses in having to provide services on federal lands in light of their not receiving property taxes on those acres, Fontaine said.

“This is probably our top priority for federal legislation as it relates to public lands,” Fontaine added. “Every year, we lobby very heavily to make sure that Congress appropriates money for PILT at the level that’s authorized in the legislation.”

NACO also is working on concerns surrounding rights-of-way, or access to roads on federal lands, “trying to develop a process and the adjudication of request for title to these roads so the counties can maintain and keep them open for commerce, business, recreation and access,” Fontaine said.

The most exciting goal this year for the Nevada Division of Lands, Donohue said, is working toward bringing about 12,000 privately owned acres in west central Nevada into public use as the Walker River State Recreation Area, a part of Gov. Brian Sandoval’s Explore Your Nevada initiative. The Division of Lands serves as the real estate agent for other state agencies, securing, selling, assigning and authorizing use of state lands.

“One of our priorities is to work through the legislative process and ensure the legislature that the state has the capacity to manage those lands after we take ownership,” Donahue added.

A similar undertaking will be to establish 315 acres of land in Clark County as Tule Springs State Park. It will require the legislature approving the requested 1.2 million in the governor’s budget for development at the springs and then the Division of State Parks developing the recreational expanse, Donohue said.

Tule Springs and Walker Basin would be the first major state parks developed in Nevada in two decades.

Donohue also intends to complete the final tasks involved in various federal land transfers to the state in White Pine and Lincoln counties “that have been really dragging along for an excessive amount of time,” he said. “Some of them are so close, they’ve never been closer,” he added. “The Ts have to be crossed, and the Is have to be dotted.”