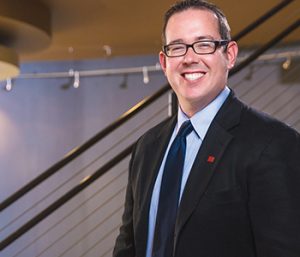 With the peak holiday spending in their rearview mirrors, Nevada retailers say they are cautiously optimistic about continued growth in 2017.

“Retail is trending positive. I’m conservatively bullish and would be happy with one to two percent growth next year,” said Kevin Budny, senior general manager of the Galleria at Sunset in Henderson. “We were comparable to 2015 this past holiday season,” he said.

“We’re really pushing closer to the peak pricing which was in 2005 to 2007,” said Chris Richardson, CCIM, director at Logic Commercial Real Estate. “Retailers are looking at opportunities and donut holes where they don’t have market coverage and developers are helping accommodate them. We’re seeing one- to five-acre developments pop up,” he explained.

The Las Vegas market improved in the third quarter of 2016 as the vacancy rate dropped from 8.6 to 8.2 percent, according to The Costar Retail Report. The latest figures (Q4, 2016) from CBRE’s Marketview show that the Reno area’s retail market has enjoyed nine consecutive quarters of positive net absorption.

“Nevada is very pro-growth and has a population that has a lot of discretionary income,” Richardson said, accounting for the state’s growth in retail.

While retailers can enjoy the increasing demand for their products and services, they are still challenged by an ever-changing market driven by new technologies and cultural changes.

“Retailers need to be very aware of the intensification of online sales and how they are a growing share of the market,” said John Restrepo, principal at RCG Economics. “The future of retail is going to be largely in the online space. Large scale distribution centers are becoming the new malls. Retail is moving away from the traditional shopping experience,” he added.

At first glance it might seem that the Galleria at Sunset is a traditional mall with its 150+ brick and mortar stores in 1,081,000 square feet of space. Today, however, it’s not enough to offer a large variety of shopping choices in a user-friendly location, according to Budny. In order to compete with the online shopping experience, retailers are focusing on customer service to attract people to physical stores and build brand loyalty. Buyers will browse online, but many will want to touch and see the product before buying. “You want to touch the cotton [for example],” Budny explained.

When the customer arrives at a store, the retailer is able to present the product they’re looking for and deliver it in a comfortable atmosphere with welcoming service. Stores are being designed with comfort and convenience in mind. Far from resting on their laurels as shopping destinations, successful mall owners and managers are constantly seeking new ways to enhance a trip to the mall.

In fact, some traditionally online retailers are moving forward with brick-and-mortar stores with an emphasis on an online/in-person experience such as Apple, Amazon and others.

In addition, advances in technology have enabled retailers to customize the shopping experiences they offer their customers. With sophisticated point of sale (POS) systems that can store choices and preferences, store owners can personalize the services they offer.

“We can capture a lot of information at the transaction point,” Budny said. “It’s about how you can make a customer feel.”

Consideration is also given to the variety of wants and needs depending on age differences. “Boomers and millennials won’t shop at the same stores,” Budny added.

While shopping will, for now, remain the core of retail development, one of the hottest areas of growth is the food industry.

“The main trend continues to be food,” said Shawn Smith, vice president at CBRE in Reno. “There’s big activity in QSRs (quick service restaurants) and sit down restaurants. There are new concepts in food, such as gourmet burgers. You’ll always need your grocery store or your restaurant.”

Like other segments of retail, grocery stores and restaurants are also evolving in both product and service. One example is Starbucks who has pushed customers to order and pay through their mobile app by offering incentives and a rewards program. Customers using the app must essentially pay with a refillable gift card in order to be eligible for rewards.

“We’re becoming more of a convenience-based population. We want good food, but we don’t want to get out of our car or go somewhere to get it. Because of that search for convenience, we’re seeing the emergence of such things as UberEats, PostLets and other delivery services,” Richardson said.

More and more restaurants are including drive-ups and take-outs in their locations. Grocery stores are offering more prepared meals that simply require heating in a microwave. Technology is also revolutionizing the entire restaurant experience as customers can check menus, order food, pay the bill and play games using computer devices right on the table.

With 11 existing locations and three more under construction in the Las Vegas area, Café Rio has been very successful in riding the food evolution that has dominated restaurants in recent years. Since opening its first location in 1997 in St. George, Utah, the company has capitalized on an increasing demand for healthy food. With a policy of serving food that is made fresh every time, the company has grown to 85 stores in 12 states.

“There’s been a creation of a fast, casual segment that’s another food experience,” said Don Lewankowski, chief development officer for Café Rio. “People are a lot more sensitive in how they spend their discretionary income. There’s a lot of higher quality food on a fast food level. With the quality of food going up, people are eating out more.”

In scouting new restaurant locations, Café Rio quickly learned that the Las Vegas market was a good match to their criteria. “The demographics of Utah are different than other markets. It doesn’t have the same diversification [as others],” Lewankowksi said. “Las Vegas is similar to Utah and modeled out very well.”

Another surprising, yet important growth segment of retail development is healthcare.

Dignity Health is going up with a half dozen new locations in the Las Vegas area. Additionally, CareNow Urgent Care has pushed for prime retail spots. In Reno, Renown Health is popping up with new lab, doctor and urgent care facilities in shopping center spaces that may have been vacant for a number of years. Healthcare providers are reaching out to empty retail space in an effort to bring services closer to where their patients live. Caughlin Ranch residents in Reno, for example, now see the signature purple Renown sign hanging on a former restaurant location in the Caughlin Ranch Shopping Center.

The hunt is always on for the right mix between established businesses and new stores and brands, especially when it comes to traditional shopping locales.

“We want to attract the best retailers to the mall,” said Budny of Galleria. “We’re always working to bring in something unique.” The mall recently threw out the red carpet to World of Beer, A’GACI Shoes and BoxLunch for their inaugural launches in Nevada. “It’s a huge balancing act. You have to keep your finger on the pulse,” he said.

Since opening in 1996, the Galleria at Sunset has also served as a gathering place for the surrounding community. Management actively continues to capitalize on that with an ambitious program of events and activities that draw people to the location. From mall walking to craft shows and non profit events, the goal is to be a place where guests make memories instead of just shopping.

As large restaurant corporations and retail centers work to adapt to a fast-changing market, even “mom and pop” entrepreneurs are striving to cater to a changing demographic.

A self-proclaimed foodie and wino, Alysia Peters entered the risky world of retail as the owner and operator of We Olive & Wine Bar Reno two years ago. Her passion for fresh food and a healthy lifestyle that includes olive oil has been the driving force in her business. Like Budny, she focuses on offering outstanding customer service in an uplifting atmosphere.

And, like Budny and other malls throughout the state, Peters hosts special events to build customer loyalty and add interest and excitement to her location in Northern Nevada. “You really get to know your customers,” Peters added.

Looking to the Future

As they look to the future, Nevada retailers exhibit an upbeat mood about general economic conditions as well as specific situations in their communities.

“There are a lot of positive factors in Southern Nevada now. We’re looking at professional sports teams, new properties on the north Strip, new master planned communities with the retail that will service them and many other components,” Richardson said.

Las Vegas movers and shakers are excited about the possibility of having professional sports teams come to town. Proponents say the teams would not only give the area good publicity, but would stimulate the economy, especially retail.

Restrepo worries that the hype surrounding the potential acquisitions has caused proponents to believe that, because Las Vegas is unique it can overcome any attendance and financial calculations that might show it doesn’t meet certain requirements. He says he doubts that the Raiders will come, but that there’s a 50-50 chance that a stadium could be built and used by the University of Nevada, Las Vegas (UNLV).

“The challenge is that you’re asking the Raiders to move from a city that’s larger and with three times more household income [than Las Vegas],” he said. Restrepo doesn’t believe that the addition of an NFL stadium in and of itself would greatly impact the economy.

With or without the teams, growth marches along in an orderly fashion as business-friendly Nevada continues to lure entrepreneurs and companies from neighboring California.

“A lot of this is that we’re becoming a Silicon Valley back office,” Smith said. He believes that if California passes a minimum hourly wage law of $15 that even more businesses will head over the hill to set up shop in Nevada.

Success in retail will continue to depend upon being flexible, open-minded and forward thinking, according to people in the business. It’s also about building relationships and loyalties with customers and their communities. Giving back by volunteering and partnering with non profits has become an integral part of most successful business enterprises. “We want to have a greater impact on the community by volunteering. I’ve donated money and thought about how to engage with the community,” Peters said.

When the rubber meets the road, it becomes an educated guessing game as those in the retail business make decisions based upon what they believe future trends will be.

“As a consumer, we’re trying to understand what we like and what we don’t,” said Richardson. “Retailers are trying to get ahead of consumer trends and to be smarter. It will be interesting to see how things shake out in 2017 and the next few years,” he concluded.