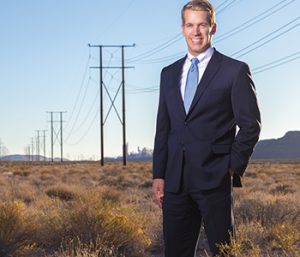 “It was the best of times, it was the worst of times” applies to Nevada’s tale of two industrial parks, one in the north and huge, the other in the south and a fraction of the size. Though the genesis of both took place at about the same time, in the late 1990s, their courses differed radically due to various circumstances of ownership, place and time. Today, the one with 17 years success serves as the model for the other, which now is experiencing momentum.

Apex Industrial Park (AIP) holds great potential, experts said. It encompasses 6,000 acres of developable land off of Interstate 15 just north of North Las Vegas. About 20 companies have sites there, including energy producers, manufacturers and distributors. The high-tech presence includes Hyperloop Technologies Inc., which is engineering transportation solutions for cargo and people, and Faraday Future, a developer of intelligent electric vehicles.

“Apex has been put on the map, and so people are really looking at it. There’s a “Faraday effect” down here,” said Ryann Juden, assistant city manager, City of North Las Vegas, referring to the domino that happens when companies realize the benefits of locating at AIP.

Two additional Fortune 500 companies are expected in the next couple of months to announce Apex as their site of choice, said Dave Brown, president, Land Development Associates (LDA), the development manager for the two largest landholders in AIP. LDA also manages Apex’s master association, comprised of about 200 landowners who own parcels ranging from 10 to 1,500 acres in size.

Additionally, about a dozen businesses are “very serious” about the industrial center and are moving through the process, Juden said.

AIP, as raw land, could generate more than $193 billion in economic impact to Nevada over a 20-year period, according to the 2014 “Economic & Tax Revenue Impact: Apex Industrial Park Development” report, prepared by various University of Nevada, Las Vegas (UNLV) entities. State and local tax revenues could increase by $670 million annually.

Now, however, with 1,000 acres absorbed and Faraday there, the estimated overall impact jumps to more than $240 billion.

Many more people working there and spending money locally will boost property values and the economies of the state and Southern Nevada, Brown said.

Also, Apex could help diversify the state’s economy by developing its manufacturing, aerospace and defense, and logistics and operations sectors.

For the City of North Las Vegas, which was facing bankruptcy in 2014, continued development of Apex would generate the tax revenues it needs to survive and help prevent it from falling off a fiscal cliff looming in 2021. By then, the city has to have stopped using millions of dollars of funds that come from water and sewer upkeep surcharges for its general expenses.

The increased number of diverse, high-wage jobs would provide work for the locals and allow children who grow up there to remain there in adulthood, Juden said.

AIP also solves Southern Nevada’s longstanding problem of little to no land available for industrial use.

The goal for AIP is “to fill every square inch with the highest and best use facilities,” Brown said. The first phase involves building infrastructure on 3,300 acres. Water, sewer, power, gas and rail, all being designed currently, should be completed by March 2017 and construction of same by second quarter 2018.

In August, NDOT is slated to begin adding a Garnet Valley Highway 93–Interstate 15 interchange and widening Highway 93, finishing by August 2019.

The U.S. Congress passed the Apex Project Act in 1989 and the Bureau of Land Management (BLM), over ten years, reserved 21,000 land acres for Clark County to buy as needed in order to move heavy industries from the Las Vegas Valley onto the land. Some companies relocated there.

In 1999, the BLM turned the acreage over to Clark County to develop it, but it lacked the money to do so. Instead, it sold the land to a group of men who then sold several parcels to various entities.

After the recession annihilated all development plans, AIP was annexed into North Las Vegas. When Mayor John Lee took office in 2013, he made advancing it a priority, one he and the city have been laser focused on since.

In 2015, Assembly Bill 497 passed, which allowed North Las Vegas to create a tax increment district at AIP and use sales and payroll taxes generated there for costs of water line construction.

Hyperloop announced last December it would conduct its Propulsion Open Air Test and locate its test track and buildings at Apex. A few days later, Faraday Future announced it selected the industrial center for its $1 billion production facility.

Hope for the Future

Many parties are rallying for and diligently working toward AIP’s success. Lee believes the industrial park will be “the breadbasket for the state.” Juden foresees it as a place where enterprise, industry and exporting are done. Brown would like AIP to become the Tahoe Reno Industrial Center (TRIC) of the south.

“We hope that the vision that we see for the AIP is realized in that it becomes the industrial tech center of Southern Nevada, if not the southwest of the United States,” Brown said.

TRIC spans 107,000 acres, a land mass that’s larger than those of Reno and Sparks combined, and is situated nine miles east of Reno in Northern Nevada’s Storey County. Currently, about 130 companies are located there, including Tesla Motor Co., Wal-Mart Stores Inc., Switch, Alcoa Inc. and PetSmart.

He estimated that contracts for absorption of 4,000 to 5,000 acres will be solidified by year-end.

Advantages for the Region

TRIC, with Tesla’s help, “has put the state, especially Northern Nevada, on a world stage,” Gilman said, adding he’s been interviewed for multiple global publications and has sold sites to Japanese and Chinese interests.

“That really allows [Nevada] to enjoy now a higher level of industry,” he added.

It’s estimated that Tesla and Switch alone will generate over half a billion a year in payrolls. As workers spend money locally, it adds to sales tax revenues and boosts the economies in and around TRIC.

The types of companies moving into the center are becoming more diversified, away from solely a logistics and distribution focus, to manufacturing, high technology and others, Whitten said, which helps the Silver State bolster some of its target sectors.

“I don’t think we can all imagine the positive impacts that will have on the quality of the companies we’ll be seeing here,” he added.

Monies generated from permit, business license and other fees paid by TRIC companies has taken Storey County from the brink of bankruptcy in 1999 to solvency today, even having excess revenue.

Also, county officials believe housing could benefit TRIC and vice versa, Whitten said, and would like 3,000 to 3,500 homes to get built in Painted Rock, a community west of the park.

The 1999 Storey County Zoning Ordinance pre-approved most types of industrial uses for TRIC, with only a few needing special use permits, Gilman said. It also restricted the county’s ability to impose any new development regulations, fees or exactions. These considerations mean a prospective company can obtain a grading permit within seven or fewer days and a building permit in fewer than 30 days. They also minimize or eliminate scheduling risk for company executives, as they know that once they commit to TRIC, their use won’t be denied and difficult or expensive conditions won’t be placed on them. This factor, Gilman said, was a key component in Tesla’s choosing TRIC.

Storey County officials envision, are focused on and committed to TRIC’s success, and this has been and continues be a critical element. For instance, Dean Haymore, Storey’s director of community development, keeps a bed at TRIC so he can sleep there on the nights when concrete is poured so he doesn’t delay the construction schedule. Other essential contributors, Gilman said, are Governor Brian Sandoval, various state agencies like the Department of Transportation (NDOT) and Division of Environmental Protection (DEP) and the utility entities.

In 1998, Gilman and partner Roger Norman recognized a shortage of land for sale in Northern Nevada. Ready for a new development project, they purchased, in cash for $20 million, 107,000 acres of land from Gulf Oil, which had planned to create a hunting preserve there. For the expanse, the two envisioned the largest industrial park of its kind in the world.

“Everybody in the market thought we were cuckoo, way out there in the desert, off the highway,” Gilman said.

The first major transaction was Walmart in 2000 which, “set the stage for what was yet to come,” Gilman said. The corporation needed its first shipment out to take place within six months of escrow closing. The county and TRIC got it done.

“Once you succeed at that, it’s a simple manner of dialing out other bureaucracy and keeping it as business friendly and streamlined and small as possible,” Whitten said.

An “epic game changer” for TRIC, Whitten said, will be the completion by 2017’s end of the extension of the USA Parkway, or State Route 439, by more than 12 miles through Storey and Lyon counties and connection of Interstate 80 to U.S. Highway 50. NDOT estimated the changes will attract about 16,000 workers to the area and reduce commute times by up to 38 percent for people driving between the 50 and 80.

As for other transportation possibilities, talks are ongoing about creating a rail port at TRIC, Gilman said.

What’s expected for TRIC over the next 10 years is ongoing buildout.

“If we manage to attain continued, even modest growth at this pace, the future will be very, very bright out there,” Whitten said.