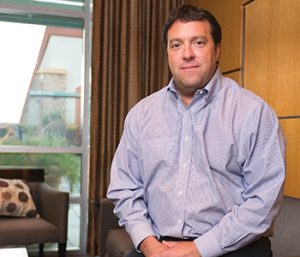 On Nevada Day at the end of this month, Valley Health System will open Henderson Hospital, its sixth hospital in Southern Nevada. VHS’ parent company Universal Health Services Inc. began the 130-bed, 247,000-square-foot facility project in May 2014. At that time, the corporation and the group of design and construction service providers chosen for the endeavor set the primary goals of a July 2016 construction finish date, an October 31, 2016 opening and a $100 million construction cost. They will meet each of those goals, largely because the entire team collectively employed lean construction practices and the related integrated product delivery model, a newer trend in Nevada that’s gaining ground here, albeit slowly.

“It’s a whole different world. We think that it’s the best delivery model out in the market now,” said Tim Ott, assistant director of project management, UHS, a lean construction trailblazer in The Silver State for the past eight years.

“We are one of the few owners who are really out there on the cutting edge, trying to change the industry,” he added. “We’re pushing integrated product delivery (IPD) on all of our projects as well as getting other owners to embrace it.”

Lean is an approach to construction in general that involves applying lean manufacturing principles and practices to a process to manage and improve it with minimum cost and maximum value.

“A lot of people think that it means do more with less. That’s really not what it is,” said Jim Cavaness, contract executive of engineering and design, Southland Industries, a design-build mechanical contractor with a Las Vegas office. Cavaness is also co-chair of the Lean Construction Institute’s (LCI) Las Vegas Community of Practice. LCI’s purpose is to educate, train and change people’s mindset on how to work in the construction market.

Based on consistent collaboration and communication, lean construction involves implementing processes with discipline so work is more streamlined and organized.

“It is continuously working to find better and more efficient ways to do everything we do. It’s a common sense approach,” said John Cannito, chief operating officer, The Penta Building Group, a general contracting firm that works in various commercial market segments and has Las Vegas and Reno offices.

For example, Gallagher Plumbing Inc. incorporates some lean practices into all of its projects regardless of whether the owner and general contractor want it, said Tim Gallagher, vice president and co-owner with brothers Patrick and Jeff Gallagher. The Las Vegas company provides plumbing for new commercial, light commercial and medical construction.

However, the ideal situation is where all parties involved in a project employ lean together, from conception through occupancy and maintenance, to collaboratively maximize everyone’s talents and knowledge — an approach called integrated project delivery. UHS uses IPD on all of its Nevada projects.

“IPD is a design-build project on steroids where we have [multiple] signers to the contract that are all accountable to each other, everybody has an equal say and all are part of a giant team doing certain aspects of it,” said Bret Loughridge, vice president of operations, SR Construction, a Las Vegas-based design-build general contractor that is part of the lean team for the new Henderson Hospital. Loughridge also co-chairs LCI’s Las Vegas branch.

The aims of lean and IPD in construction are to increase value for the owner, reduce waste, optimize project results and maximize efficiency.

Lean construction has its own language to create a commonality and understanding among practitioners. For instance, “pull planning” is defining, sequencing and setting deadlines for all of the tasks a project requires, working backward from the overall project target completion date, or the milestone.

Lean construction emerged to counteract customer and supply chain dissatisfaction with the building industry. It evolved from the lean manufacturing processes and practices of the Toyota Production System. The percentage of time that the building industry achieves conditions of satisfaction — what the customer wants, when and for what price — needs improvement, according to the LCI.

“On the first day [of the project], we have what we call a ‘bootcamp’ where you talk about the genesis of where this came from, how it applied to manufacturing and how you take those concepts and apply them to the construction business. It’s extremely important to start in the beginning,” said Steve Brooke, regional manager of Ledcor, a national construction company with locations in both Las Vegas and Reno.

Nationally, 70 percent of construction projects are delivered late and over budget. “We want to be more efficient with that,” Cavaness said.

Additionally, the organization wants to make the industry safer. As it is, about 800 deaths and thousands of injuries occur in the industry annually, LCI data shows.

In the case of the Henderson Hospital, the project owner, UHS, first built its team of about 10 construction-related companies through consensus, hiring one partner at a time, Ott said.

“[This approach] gets buy-in from all of the partners. Everybody has a say in how the team is formed and who’s on it,” Ott said, noting the traditional approach typically would’ve been to issue a request for proposals and hire the lowest bidders.

They also got VHS’ five other hospitals to assign a representative from each department — for end-user input — to assist in design process of the new hospital.

Second, the team designed and planned the project, a phase that took a year and a half.

Using Styrofoam panels, the team built mockups of numerous hospital spaces, such as the emergency room and the intensive care unit, so the representatives could experience them and provide feedback on what did and didn’t work before the areas were drawn officially into the plans.

With all team members’ costs exposed and the owner’s input on what it wanted to pay, they arrived at a cost target.

“One of the biggest issues in our industry is the owner never really understands, in the traditional model, when the project will actually be done and how much it is going to cost them in the end,” Ott said.

With IPD, everyone is guaranteed their cost and a gross margin. If the project’s overall costs wind up being lower than anticipated, all team members share in the extra profit, and vice versa.

“The subcontractors and general contractors want to achieve [the decided upon cost] for the owner. Also, the enhanced profit that’s there makes them say, ‘Let’s help each other,’” Cavaness said. “We may even find money in the budget that the owner now can do cooler things with the project and do them on the front end instead of back end. That’s not regularly in construction.”

Together, the Henderson Hospital team employed the commitment-based last planner system to plan and schedule the entire project, from the high-level milestones down to daily work activity. Team members aren’t told what they have to do and how much time they have to do it. Instead, they inform the team what tasks and time the job require.

Third, the construction work began. During that period, the team met weekly in what’s called the “big room” to regroup, assess progress, answer requests for information and problem solve, all collaboratively. One practice it employed was choosing by advantages, in which the team, when necessary, collectively selects from a list of options based on the benefits.

“[With the meetings], it’s more enjoyable just working with the other trades. You get to know them much more,” Gallagher said.

The team also did numerous retrospectives, stopping at certain points in the project or when a breakdown occurred to reflect on what had happened, why and how they could prevent it in the future. One lesson learned, Ott said, was that UHS could have better described to the new partners the expectations and the setting of goals and objectives when they onboarded them, or introduced them to the project, and vice versa, as lean construction is new to many people.

This team approach is contrary to traditional construction, in which “everyone works alone, for themselves, pushing from a starting point instead of pulling,” Loughridge said.

Gallagher said a lesson learned from IPD is all of the collaboration better organizes the workers, allowing actual tasks in the field to go more smoothly.

The primary benefits to the owner of using lean and IPD are a higher-quality project and predictability with respect to cost and delivery date. With Henderson Hospital, UHS/VHS received “a building that supports efficient and lean hospital operations,” on time and on budget, Ott said. The team also attained six targets related to patient ratings of their care and experience while in a hospital.

Major advantages to the other parties involved are reduced safety hazards and confidence in when actions and tasks are going to happen. Another is cost savings, which results from less risk, better productivity, greater efficiency and reduced waste. Waste in traditional construction is huge, found in change orders, excess material production, waiting for other subcontractors to complete work and for answers to requests for information (RFIs), and more, Cavaness said.

“It stresses the importance of collaboration,” added Brooke. “The [subcontractors] really appear to like it because they have a voice in the planning of the project. A byproduct of that is we get buy-in, but we also get accountability at the subcontractor level because we’re incorporating their commitments into the schedule.”

Because lean’s IPD is relatively new in Nevada, it requires trust among the team members, which for some people is too big a hurdle.

“It really is quite honestly a leap of faith,” Cavaness said. “You really need to be with people who have the right attitude.”

Getting people to consider a different approach to construction, let alone try it, is difficult, particularly professionals who’ve been successful for years working their own way.

“There’s definitely a learning curve at the start of the project,” added Brooke. “If the team is resistant, it’s an uphill battle.”

“Some of them want nothing to do with it,” Loughridge said. “We’re not trying to change why a person has been successful, but everyone can improve.”

All the necessary upfront meetings when nothing is getting built can be difficult for a business, Gallagher said, but it becomes worthwhile in the long run.

“You have to learn to think a little differently and still try to see the positive of that,” he added.

Lean construction is catching on slowly in Nevada, experts said. More companies are practicing lean than simply talking about it, and awareness of the local IPD projects is increasing. The number of people attending the LCI’s Lean Coffees, informal discussions about anything related to lean construction, has doubled over three years. The Associated General Contractors of America this year began offering a Certificate of Management-Lean Construction.

The trend likely won’t take off until more owners and general contractors get on board, Gallagher said. For it to explode, it might require the hospitality/gaming industry getting behind it, Loughridge noted. However, the existing shortage of a qualified construction workforce may cause a shift toward lean. If the technology companies relocating in Nevada push for lean, Cannito, said, that, too, could help drive the trend.

“We truly believe being lean makes us more competitive,” Cannito said. “If it does and other companies become more competitive, those that don’t are going to fall behind. I think that’s true for the industry but very true for Nevada as well.”