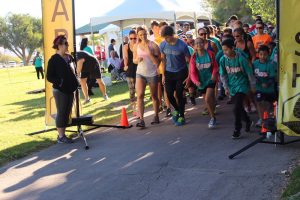 LAS VEGAS – More than 500 walkers and runners took part in Hemophilia Walks and 5K events in Las Vegas and Reno in September, allowing the Nevada Chapter of the National Hemophilia Foundation to raise more than $60,000 during the nonprofit organization’s largest fundraisers of the year.

The foundation, a 501(c)(3) nonprofit organization, will use the funds to send children and their siblings to a medically supervised summer camp, known as Camp Independent Firefly, which allows children with inherited bleeding disorders to participate in outdoor activities while having medical personnel nearby should they be needed. The Nevada Chapter of the National Hemophilia Foundation underwrites the cost of the weeklong camping adventure, so families can send their kids to camp for free.

Additional funds raised through the Walks will help families in need of emergency assistance, including access to life-saving medication or emergency living expenses. Without medical insurance, medication to stop or prevent a life-threatening bleed is extremely expensive.

“The amount of support we have received from our dedicated walk teams, supportive businesses and community leaders is humbling,” said Kelli Walters, Executive Director of the Nevada Chapter of the National Hemophilia Foundation. “Without the support of these groups we simply cannot offer the services, educational and advocacy programs that are important to the inherited bleeding disorders community.”

This year’s top fundraising teams include: The Las Vegas HTC All Stars which brought in $7450, followed by Team Emily and AJ raising $6,100. In Reno, the Reno HTC All Stars took top team honors bringing in $3590 in donations.