You are here: Home / Features / Building Nevada / Commercial Builders: The Rebound and the Growing Pains 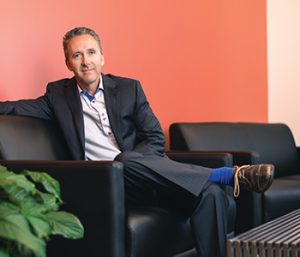 Whereas Nevada’s commercial construction industry was all but dead five years ago, today it’s alive, with activity edging up.

“We are finally in a period of growth. A lot more work is happening,” said Mac Bybee, president, Associated Builders and Contractors Inc. (ABC), Nevada Chapter, a statewide trade association that provides training, apprenticeship programs, government affairs representation, networking and business development to and for its 140 members.

Northern Nevada came back first with rebound beginning last summer and still ramping up, according to Bybee.

“It’s very busy,” he added, noting some ABC members are working daily to meet demand. “There’s a ripple effect that’s occurring due to [Tesla coming in] that’s been very positive for our industry.”

Many warehouses are being built as existing inventory has been absorbed, Madole said. Private opportunities are prevailing over public works and government-funded projects, which is a major shift. The housing market is heating up, which is expected to drive commercial building further.

Reno-based United Construction Co., for instance, has experienced a steady increase in revenue from Nevada projects since fiscal year-end 2013, said Michael Russell, CEO. Its busiest market segment by dollar volume has been industrial and manufacturing over the past 12 months, but recently, opportunities have been cropping up in healthcare, worship, mixed-use and office segments. The company has expanded its staff by over 200 percent since 2014 and is now looking to hire qualified project managers, superintendents and/or estimators.

The commercial and industrial contractor, which provides design-build, design-assist and general contracting services, recently completed the LogistiCenter Cheyenne in Las Vegas, Eagle Valley II in the Tahoe-Reno Industrial Center, and three LogistiCenter buildings in Reno. Projects under or about to start construction include the University Studies Abroad Consortium (USAC) office building at the University of Nevada, Reno (UNR), and LogistiCenters in Verdi and Las Vegas.

“Southern Nevada’s commercial industry has become healthy and innovative again,” he added. “The last 12 months have created more [project] diversity than we have seen in the last five years.”

DC Building’s work volume this year is expected to be up 40 percent over that of 2015, with a similar year-over-year jump anticipated in 2017. The company, which builds from Southern Nevada to Ely and Reno-Tahoe, specializes in high-end restaurant, custom retail and industrial manufacturing developments.

Most of the Nevada-based commercial contractors operating in the Silver State today are ones that were in business before and weathered the recession, during which many had to work out of state to remain viable, Russell said. Since the downturn, a few startups have entered the market.

In addition to Nevada, DC Building Group is active in California, Utah, Arizona, Colorado, Texas, North Carolina, Connecticut and Idaho. Similarly, United Construction works in California, Illinois and Ohio but is licensed in more than 10 states and is considering pursuing jobs in Idaho, Wisconsin and Oregon as well.

As a positive, commercial building continues to rebound in Nevada, but it isn’t entirely rosy. Based on the estimated number of its workers today compared to that in 2007, the industry has recovered to just over 50 percent, Madole said. However, available work remains lean.

Developers, owners, contractors and banks are still cautious and conservative, Danoski said, wanting more certainty that growth will continue before hiring and lending.

“Even though we’ve been coming back, we’re still not really back,” Madole explained, “and I don’t know that we’ll ever see that level of activity again.”

Competition is stiff, with project bids within only a few percentage points of each other, and project margins small.

“Customers have become very savvy in grinding as much cost as they can out of builders and their projects, and much of our business is now viewed as a commodity instead of a professional service,” Russell said.

The industry’s biggest problem is a shortage of qualified construction workers, skilled tradespeople from carpenters to electricians to heavy equipment operators and professionals such as project managers and estimators. This primarily is due to many of them having moved away to where they could find jobs, or, more so, having left the industry altogether when work disappeared, said Margi Grein, executive officer, Nevada State Contractors Board (NSCB). The NSCB issues contractor licenses, regulates contractor compliance with licensing laws and investigates complaints filed with the board. It’s developing a unit to address commercial issues specifically.

Consequently, today some Nevada contractors intentionally aren’t bidding on jobs because they lack the personnel to carry out the work. This scenario could result in a construction slowdown and/or the use of unlicensed contractors or subcontractors, an action against which the NSCB continually advises.

“The problem is you had an industry that was basically decimated for eight years, and you had nobody going into that industry,” Bybee said. “Our workforce today is just going to have to be homegrown from scratch.”

Today, the Silver State has an estimated 5,467 licensed general builder entities holding class AB, A, B or B2 licenses, Grein said, which is more than last year’s amount. The number of applications the NSCB receives each quarter is growing, by about 3 to 5 percent.

Several trade associations, economic development agencies, schools and other groups are creating and offering programs and support where possible to attract, train and educate people, but it’s not remedied easily, Bybee said.

“It is an industry that requires a lot of talent and a lot of skill. It’s not something that just anybody can do,” he added.

Fixes in the Works

As far as what’s being done to build the industry, the Nevada Construction Collaborative, made up of construction trade organizations, has developed BuildNV.org. The site is a hub where workers can post their resume and employers can find employees, Madole said.

In Reno and Las Vegas, ABC is continuing to offer four-year apprenticeship training programs for electrical and plumbing, which include classroom instruction and hands-on experience. It would expand into other trades if its members wanted and would support it.

AGC works with the Washoe County School District doing outreach at local schools, educating students about and trying to get them interested in a construction career. It will hold a construction career day for school children starting this fall. Also planned is for AGC and Nevada Department of Transportation (NDOT) to begin educating schoolteachers and counselors about careers in construction, via an externship for which they can obtain continuing education credits, in the hopes they’ll encourage students to think about job prospects in construction.

The Governor’s Workforce Investment Board, which shapes strategies that best meet workforce needs, plans to add construction as a sector council, said Bybee, a member.

The NSCB’s commission on construction education will continue awarding grants to groups for construction and education training programs, Grein said. The monies for those are from paid fines assessed to licensed contractors for violations.

Despite all of the efforts, a material reversal of the workforce shortage will take time.

“Even with that workforce development focus, the workload in our industry will continue to outstrip labor availability for the foreseeable future,” Russell said.

Earlier this year, in an effort to remove as many hurdles for new contractors as possible, the NSCB streamlined and shortened its application process and created a brochure to guide applicants through key areas and requirements. Also, the agency offers free, face-to-face orientations in Reno and Henderson for new applicants (dates are posted on its website).

To become a licensed commercial contractor in Nevada, prospects must:

Also, one individual on an application must pass a trade exam and a construction law exam before licensure.

The application fee is $300 and nonrefundable. A complete application can be turned around in 30 to 60 days, Grein said. Once approved, the license fee is $600 every two years.

Much public infrastructure needs improvements and/or additions, which haven’t been done and aren’t being done, due to lack of available funding, Madole said.

“We’re going to need the public agencies to start making those investments to be able to continue the [commercial construction] growth that we’re seeing currently,” he added.

Land is again becoming limited, Danoski said. Availability of land has long been an obstacle to commercial development in Southern Nevada. Most of it is owned by the U.S. Bureau of Land Management (BLM), which only occasionally sells parcels.

A constant challenge for contractors, Bybee said, is monitoring and complying with existing and changing regulations and taxes imposed at all government levels.

AGC would like to see legislation that mandates one standardized way that Nevada entities require general contractors to list their subcontractors on work bids, Madole said.

“[Uniformity] would save everybody time and energy,” he added.

An industry issue likely to arise during the next legislative session is the Construction Managers at Risk process, Bybee said. With this project delivery method, which is gaining popularity in the public sector, a client selects a construction manager, makes them part of a collaborative team then obtains from them a bonded guaranteed maximum price for a project.

Coming up is ABC’s 7th annual “Meet the General Contractors”, an event that links subcontractors and suppliers with general contractors. It’s slated for May 25, 2017 in Las Vegas.

Throughout 2016 and 2017, Nevada should expect at least the same level of commercial building opportunities, Madole said.

The industry likely will move to longer project schedules and additional project management to deal with the existing workforce shortage, Russell said. He also expects increases in labor and materials costs. However, he remains bullish on commercial construction in Nevada overall for the short term.

“Based on the considerable availability of private and institutional investment capital, coupled with current market demand, low vacancy, rising lease rates and a continuing low cap rate environment, I think we can safely forecast a few more years of solid growth in our local markets,” Russell said.