You are here: Home / Features / Cover Story / Are We There Yet? Nevada Roadways 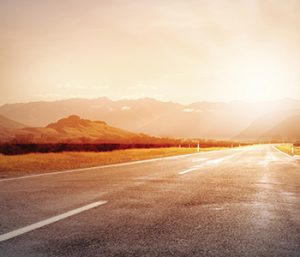 No discussion of transportation is complete without orange cones. Conversations aren’t always friendly, but they do allow information to flow on why cones are out there and which transportation agency is trying to minimize disruptions and maximize outcome, said Tina Quigley, general manager, Regional Transportation Commission of Southern Nevada (RTC South).

In Southern Nevada a three year trial of Fuel Revenue Indexing (FRI) is ending. The program was put in place by the 2013 State Legislature to fund transportation projects and create jobs.

Funding highway projects with a fuel tax isn’t new. Tying the tax to the rate of inflation is.

“For 20 years, from 1995 until 2014, the motor vehicle fuel tax was a flat 52 cents,” said Quigley. The collected taxes were then broken out with a percentage going to the state, to the local RTC and to other jurisdictions including the City of Las Vegas and Clark County.

In November Clark County voters will choose whether to continue the program through 2026. Public works directors are hopeful – there’s some $350 million in unfunded projects in Southern Nevada.

The previous motor vehicle fuel tax in Southern Nevada was static, with 18.5 percent going to the state and a static 9 cents to RTC. The tax remained static: the cost of construction materials didn’t. Where 20 years ago the cost of a ton of asphalt was $35, today it’s $89.36.

“You lose the ability to continue maintaining let alone growing your infrastructure if you don’t tie your purchasing power to the inflationary index at which the products are growing,” said Quigley.

Plus, even with federal funds available, it’s more efficient to fund the projects 100 percent locally.

Southern Nevada will vote in November whether to continue FRI. The rest of the state, except Washoe County, will vote whether to start.

Every county is discussing how FRI has worked in Washoe County, which adopted the program in 2010 and has found it effective for funding projects. Where Washoe County differs from the trial program in Southern Nevada is that funds gathered go directly to RTC.

“We thought it was a wiser public policy decision that revenues that are garnered from the state come to the RTC and are controlled by the RTC,” said Lee Gibson, CEO, Regional Transportation Commission Washoe County (RTC North).

That said, RTC North works closely with NDOT on projects. RTC functions as the metropolitan planning organization responsible for regional transportation planning and has the authority to pick projects; the agency receives a ballpark figure of 40 to 50 percent federal funds.

Provided FRI is voted in, every county commission then enacts the legislation in that county.

“Those along I-80 with truck stops where a lot of trucks fuel up, those counties would get the index applied to the diesel tax,” Malfabon said. Currently those counties don’t receive any income from diesel sales, so the change should be significant.

Directing the use of FRI funds will be a local decision. Lower cost projects include preservation and maintenance re-paving, resurfacing or surface sealing with oils or rock chip seal, said Malfabon; those projects can add up to a lot of years of preservation of current streets and highways.

When maintenance projects aren’t put in place, roads deteriorate to the point where they cost a lot more to fix because a simple overlay or repair won’t work. When transportation authorities start up a project, the preference is to do everything possible at once.

“We want to do the sidewalks, install the transit outside amenities, reconstruct the roads and deal with the utilities,” said Gibson. “We just want to be in there once. When we’re out of there, there’s a complete multimodal corridor ready for public use for years.”

New Ways to Get There

The motto for Greyhound used to be “Leave the Driving to Us”. Today there are a variety of new technologies and modalities aimed at allowing travelers to do just that – leave the driving to someone – or something – else.

“People are recognizing in Southern Nevada there’s not enough asphalt or green lights to continue to move people in some of our highly concentrated areas as the Valley grows,” said Quigley.

In the next nine years Southern Nevada is expected to see its residential population swell to 2.7 million, along with projected growth from 43 million annual visitors to 53 million.

That’s a lot of traffic.

Which means conversations turn naturally to mass transit and past traditional buses to solutions like light rail. Beyond those changes, there’s already a form of ride sharing in place. Technology network companies Uber and Lyft have located in Nevada’s metro areas.

Uber located in Nevada in September 2015, offering services in Las Vegas and Reno-Sparks and Lake Tahoe. Potential riders download an app and create an account connected to a credit card.

“When requesting a car, the application offers to show the eight closest cars to you, all based on proximity,” said Eric Wimer, general manager, Uber. Hit the request button and the closest car is dispatched.

Drivers using personal vehicles are independent contractors who set their own hours. Because approximately 50 percent of Uber drivers nationally drive less than 10 hours a week, Wimer said, there are times when events let out in Las Vegas that cars can be at a premium.

Regulations for ride sharing companies falls under the Nevada Transportation Authority, and the highway fund receives revenue from them, approximately $5 million a biennium.

Senate Bill 376 in the 2015 Nevada Legislature paved the way for Uber and Lyft to operate in the state and the companies now provide approximately 13 percent of rides previously provided by taxicabs in Las Vegas.

Cabs are also updating their technology. Ronald Grogan, administrator, Nevada Taxicab Authority, estimates smart meters are already installed in half of the Nevada fleets. Smart meters collect data, including pickup, drop off and miles driven, and can replace cab radios by functioning like cell phones.

Both Uber and Lyft are a great potential asset for facilitating transportation of elderly and disabled members of the community in Northern Nevada, said Gibson. While there’s already a partnership in place with local cab companies to provide such services, the convenience of a cell phone app could really enhance such services.

Mass transit ideas in Northern Nevada involve a connecting transportation system between UNR and Midtown, and the possibility of some kind of commuter service to the rapidly growing industrial and technology center at USA Parkway, midway between Reno and Fernley on I-80.

“We’re also looking at a southeast connector service to Carson City because we’ve heard from state employees and others who work in Carson City and live in Reno or Sparks,” said Gibson.

Somewhere even farther down the road we might see light rail service heading out I-80 East to the Tahoe-Reno Industrial Center and maybe even commuter rail service to California.

And maybe nobody will be doing the driving. Research into autonomous and semi autonomous cars is moving at a fast pace. Nevada is one of the states testing the technology and the future, when those cars are in use on our freeways, is just around the corner.

“If you’d asked me a year ago when will we see them, I would have said three to four years,” said Jude Hurin, administrator, Management Services and Programs Division, DMV. “Now my answer is kind of modified in a tiered approach.”

Because what most people mean when they ask about autonomous vehicles is passenger vehicles, possibly traveling at high speeds.

“That’s the focus, the bright, shiny object they’re excited about,” said Dan Langford, director, Nevada Center for Advanced Mobility (NCAM) at the Governor’s Office of Economic Development (GOED). But the dozen companies licensed to drive autonomous vehicles in the state are driving trucks.

Autonomous technology and trucking is new enough that the transportation industry hasn’t chosen a name. Connected vehicles, platooning and convoy are the simplest monikers.

Similar to autonomous use, platooning allows a number of semis to connect electronically. Each has a driver with hands on the wheel, but because the trucks are connected, they accelerate and brake together.

“With an electronic convoy, that allows an increased amount of fuel savings for those vehicles,” said Hurin. “The first truck would have a small percentage, 3 percent, of gas savings from the aerodynamics. The second anywhere from 7 to 8 percent, and the third 11 percent.” Technology keeps the trucks together in the center lane and automatically adjusts to keep them a safe distance from other vehicles.

Hurin said there are requests to the 2017 Nevada Legislature to expand Nevada Revised Statutes 42A proposing a definition for platooning, the authority to create regulations for it and inserting language into the statute to ensure the ability to work with autonomous technology.

“The hope is if one or more of the companies are successful they’ll grow in Las Vegas [and] employ people in Las Vegas, a double win for us, because not only would we get this technology tested and growing [here] but we’d get the economic benefit of creating a new industry and having employees in that industry based in Southern Nevada,” said Quigley.

Currently NDOT is planning to widen US 93 for about five miles and reconstruct the interchange at US 93 and I-15 near Apex Industrial Center in Las Vegas, where Faraday Future is building their plant to manufacture their own autonomous vehicles.

There is hope that as the technology progresses, that autonomous vehicles won’t require massive infrastructure change.

“Companies are building [autonomous] technology to not be dependent on infrastructure,” said Hurin. But they’re also looking at the benefits of technology that can communicate so that if weather conditions like snow cause problems with the car’s sensors picking up the striping on the road, other sensors can communicate electronically for guidance and continue safely operating.

“I think it was Audi trying out an autonomous vehicle in Los Angeles County and there was something with the condition of that road and the car lost its way. Usually they follow the striping and that has implications for us because we have a lot of local roads where we need to refresh the striping after the winter because it fades from snow and plowing,” said Malfabon.

NCAM is coordinating agencies working with autonomous vehicles including DMV for licensing, NDOT and the Nevada Departments of Public Safety, and Business and Industry. The agency is also taking a leadership role in regulating the industry so companies working with the technology can do what they need to when testing and working with research and development partners including Desert Research Institute, UNLV and UNR. Lastly, the agency is helping the industry showcase its technologies, for example, to some of the 43 million annual visitors to Southern Nevada.

Going forward it’s likely we’ll see a variety of pilot programs so people can go for a ride, allay fears of the new technology and understand what autonomous vehicles really mean.

What they probably mean is the future of transportation has arrived.