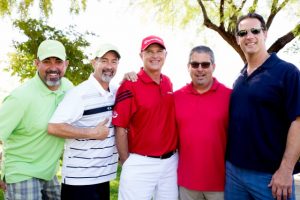 LAS VEGAS – The 4th Annual Golf 4 The Kids Tournament raised an impressive $60,000 through corporate sponsorship’s, foursomes, and donations on the day of the event. The tournament, which began in 2013, benefits two Nevada nonprofit organizations which will split the proceeds equally: Cure 4 The Kids Foundation and the Nevada Chapter of the National Hemophilia Foundation.

The Nevada Chapter of the National Hemophilia Foundation will use the proceeds to send children with inherited bleeding disorders — and siblings — to a medically supervised summer camp, known as Camp Independent Firefly. With physicians and medical staff on-site, the kids have fun in an outdoor environment and also learn skills to become independent while dealing with their disorder.

“It is so gratifying to see a team of community members, corporations, golfers, and volunteers come together to wholeheartedly support a cause that we know is so important to our community,” said Kelli Walters, Executive Director of the Nevada Chapter of the National Hemophilia Foundation. “Because of the generosity of this group, we know many kids with inherited bleeding disorders will have a life-changing experience at Camp Independent Firefly.”

Cure 4 The Kids Foundation will use its proceeds to fund the Charity Care Program. Many families whose children are faced with catastrophic medical conditions don’t have health insurance or find their insurance lacks coverage. The Charity Care Program ensures that all patients receive treatment, with or without medical insurance and regardless of a family’s ability to pay for treatment.

“We are so thankful for the support of not just the companies who consistently step up as sponsors, but the individuals who give of their time to play in our tournament,” said Annette Logan, Cure 4 The Kids Foundation CEO and co-founder. “As a nonprofit organization, these funds provide real benefit to our patients who are without medical insurance or cannot pay for treatment.”

Cure 4 the Kids Foundation provides treatment to children in Nevada facing life-threatening diseases such as cancer, inherited bleeding disorders, rheumatological and genetic conditions regardless of family income or presence of medical insurance. Through its two programs, The Children’s Specialty Center of Nevada and the Hemophilia Treatment Center of Nevada, thousands of patients have received treatment, some at no cost. www.cure4thekids.org