You are here: Home / Features / Building Nevada / Business on the Move: Office Market in Nevada 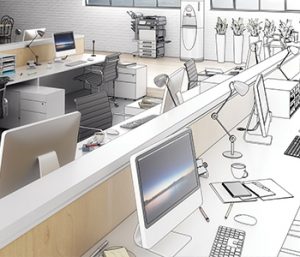 As election jitters continue to dominate the news cycle, the status of the national economy appears to be just so-so in the minds of many business leaders. With only 38,000 jobs added in May, according to the latest U.S. Department of Labor statistics, the overall national employment situation is not as strong as most people would like. Having survived the steep highs and lows of the last decade, however, Nevada seems to be holding its own compared to some other areas of the country.

“The Nevada economy is doing fairly well, but the national economy seems to be going into a bit of a down cycle,” said John Restrepo, principal at RGC Economics in Las Vegas. “I would describe the office market as moderately healthy and definitely better than a few years ago. We have a long ways to go to return to normal though,” he added.

Reflecting the slow and steady growth that the economy in the Silver State is experiencing now, the demand for commercial office space periodically puts pressure on available product.

“All of our locations are filling up. The demand is the general growth of Las Vegas,” said Roland Sansone, president of Sansone Companies in Las Vegas. The 2016 first quarter Las Vegas Speculative Office Survey showed that 262,300 or 32 percent of all private payroll jobs in Clark County were office-related compared to 256,600 for first quarter 2015. Although that’s not a huge movement, at least it’s in the right direction for those who are invested in the office market.

Other figures for the Las Vegas Valley for Q1 2016, however, showed that additional space was added, vacancy rates rose slightly and monthly rates decreased a bit. New space totaling 15,788 square feet came into the market while the vacancy rate rose from 18.4 percent in Q4 2015 to 18.7 percent. A desirable vacancy rate is around 10 percent, according to Restrepo, which would open the door to new construction.Average monthly asking rents dipped from $1.97 per square foot to $1.89. Statistics also indicate a net negative absorption of -130,802 square feet following positive absorption for the past 10 of 11 quarters.

Following the desire to create a pleasant work space for employees, increasing numbers of tenants are asking to upgrade their offices. “People want the class A look,” Sansone said. Although some class B and C properties are struggling, growing pressure in the market is expected to help them fill up. Tenant improvements have also gotten upscale and specific.

“We have to put in server rooms with heating and cooling and also a lot of glass. It’s not cheaper, but just a different look,” Sansone said. Some tenants also prefer a wide open look with taller ceilings and lots of collaborative space.

Promoting environmental awareness and sensitivity is also important, according to Restrepo. “We’re seeing larger users trend toward green buildings. They’re moving toward smaller offices with open areas. It ebbs back and forth, but, in general, seems to be going back to eco-friendly and traditional,” he said. The rule of thumb used to be 250 square feet per employee, but some buildings are now providing only 176 square feet.

In addition, parking ratios have changed, according to Hayim Mizrachi, president and principal at MDL Group in Las Vegas. “As companies put more people in offices, they require more parking. The parking ratio used to be between three and five spaces per thousand [square feet]. Today you need five or above,” he said. Mizrachi said his company has grown from 25 to 41 employees and is looking forward to moving into new space on South Jones Boulevard. “We’ve filled out our office space completely,” he said. The company decided to build because of a lack of options in the areas of town he preferred.

With interest rates still relatively low, leasing to buy is becoming more popular, according to Sansone. Some potential tenants are pleased to discover that they can purchase a building for less than what their rent might cost.

“To buy or lease is a personal philosophy. It depends upon how much growth a business expects and how long-term the deal will be. Then, once you decide to own, you have to decide to do a build-to-suit or buy something existing,” Mizrachi said.

In 2015 the Southern Nevada market saw 48 office sales transactions with a total volume of $384,632,411 which was one less sale than in 2014, according to the Costar Office Report for Q1 2016. Select top sales from January 2015 through March 2016 include the MGM Airport Corporate Center, The Oakey Building, VA Northwest Primary Care Clinic, City Centre Place, Cornerstone Office Park, Bank of America West, Commerce on the Green and the Acuity Financial Center.

Although tenants would like to have more new facilities to consider, the Southern Nevada market isn’t supporting that right now. “There are very few new developments because of the cost of land and construction,” Sansone said. About 261,000 square feet are under construction which includes Union Village, Tivoli Village-Phase 2, Pecos Springs Business Park expansion and the Park at Spanish Ridge. Planned projects include Centennial Hills Center Phase 1, Cimarron/Raphael Rivera, Seven Hills Plaza D, Stone Creek Professional Plaza, The Grid, The Square, University Gateway and Chronicle at Cadence for a total of 423,000 square feet.

Like Southern Nevada, the office market in the Reno-Sparks area shows slow, but steady growth. “It’s more of a landlord’s market, but only slightly. Every month there are fewer options for clients. We try to leave existing space for our client’s growth,” said Matt White, CEO of Basin Street Properties in Reno. “Concessions are being reduced and rents are continuing to increase. We need to get to the point that will support new construction.” The demand is across the board and includes law firms, insurance, finance, environmental, tech companies and medical.

Melissa Molyneaux, executive managing director and senior vice president at Colliers Reno, said she’s optimistic about the economy in general. “The market is very active and busy, but the number of signed deals isn’t what we would like. Signed deals have been with existing tenants and we have a lot of lookers from out of state. The biggest trend is renewals and expansion. That’s a sign that the economy is going in the right direction,” she said.

The Reno-Sparks market posted a positive net absorption of 22,610 square feet for Q1 this year, making it the seventh quarter of positive absorption in a row, according to the Reno Research & Forecast Report provided by Colliers Reno. The vacancy rate stayed steady at 14.4 percent from the previous quarter and asking rents inched up slightly from $1.42 to $1.44. With a healthy absorption rate of 25,000 square feet, it would take about three years to hit an overall balance of 10 percent vacancy.

Although Tesla continues to dominate economic conversation in Northern Nevada, the jury is still out regarding what its full influence will eventually be. “The Tesla affect has had very little direct impact on the office market, but the psychological affect makes people feel good about the market. People are growing their businesses. There’s a lot of indirect impact that’s been great. Our economy is all psychological. When people don’t feel good about things they stop spending money,” White said. “We’ll probably see an economic slowdown in the next couple of years, but Northern Nevada will sail right through. I think Tesla will have more of a direct affect then.”

In helping clients find the right home for their business, it’s important to understand their specific needs and preferences.

“The tech tenants I work with don’t like open space. They prefer private, dark space. They care about the culture though and place a huge emphasis on employee satisfaction which helps retention,” Molyneaux explained. “They’re making the office representative of their company. If a company is from a big city they are more apt to go downtown.”

The bulk of her business, however, involves taking care of existing clients. “People are staying where they are. We had flight to quality during the recession, but it’s really hard for an existing client to move now,” she said.

One of the most positive elements of the market is the discussion and realization of new construction. “The most interesting thing is talk of a lot of development in areas that need it. Some people are looking to build,” Molyneaux said. Tanamera is constructing a 15,000-square-foot building on Longley Lane, the first new office building over 15,000 square feet since 2008. Other new development includes Corporate Pointe on South Virginia and McCarran, Rancharrah on Talbot Lane and West Elm located in the former historic post office in downtown Reno. Significant sales in Q1 this year include 590 Double Eagle Court, 9590 Prototype Court, 10 State Street and 63 Keystone Avenue. Colliers is anticipating that 2016 will be a banner year for office sales.

In looking to the future, White said he worries about predictions of rapid growth of as much as 50,000 people in five years. “Every aspect of the community needs to be prepared for an influx of new people. My concern is that we won’t do a good job of it,” he said. “50,000 people in five years scares me. I hope that’s wrong; 25,000 is better.” He is also concerned about how Northern Nevadans perceive themselves. “The problem with Northern Nevada is that it has a huge self-esteem issue. We’re an amazing place. It’s about becoming a more well-rounded community.”

Restrepo said that the successful diversification of Northern Nevada’s economy will serve it well into the future. The situation in the Las Vegas Valley is a little different, however. “We’re still largely concentrated in lodging and hospitality in Southern Nevada. It’s 30 percent which hasn’t changed that dramatically. Gaming has always been a big part. That industry is also low wage,” he said. He supports a revised tax structure, educational reform and a STEM (science, technology, engineering and mathematics) workforce to help boost the economy.

Molyneaux is most encouraged by the new development she sees going up in and around Reno. “We need to have new buildings. I see rental rates increasing and it would be nice to see small buildings for purchase. We need more product. Smart growth is good and it’s manageable,” she added.

NAI Vegas represents the largest privately owned and nationally affiliated firm in Las Vegas, ranking third in investment sales. What that means is local decision-making, leadership, market focus and relationships that are centered on and in Las Vegas. The national affiliation with NAI Global allows them broad access to market insights, corporate or tenant connections, and the ability to introduce clients to relationships nationally and internationally.

The principals of NAI Vegas, whose expertise and experience add another dimension to NAI’s capable professionals, have extensive experience in the real estate, construction, development, finance, and management fields. Company principals have managed, maintained, marketed, and transacted billions of dollars in commercial real estate.

Uniting accountability and motivation with skill and experience, the NAI Vegas team holds itself to the highest professional standards. The team actively acquires and shares knowledge through coordinated efforts that result in success for its clients.

NAI Global is the premier network of independent commercial real estate firms and one of the largest commercial real estate service providers worldwide. NAI Global manages a network of 5,000 professionals and 400 offices in 55 countries throughout the world. Professionals work together with a global management team to help clients strategically optimize their real estate assets. Over $45 billion in transactions are completed annually. The firm also manages over 200 million square feet of commercial space.

While working with individual investors to large institutional organizations, NAI offers experienced and professional talent at the local and global level. The bottom line is to always manage the client’s goals while preserving capital, minimizing risk, and striving to increase income.