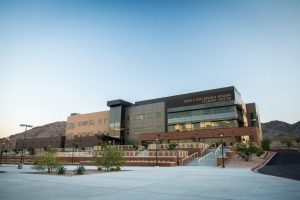 HENDERSON, NEVADA – Nevada State College on June 30 concludes the first major fundraising initiative in its history. The two-year Comprehensive Capital Campaign has raised $16.8 million to date and is on pace to hit $17 million by the month’s end, surpassing its initial goal of $10 million.

Now the college is ramping up to raise millions more.

The funds raised helped triple the size of the campus with two new state-of-the-art buildings, which opened this past fall. Money raised in this effort also has paid for 120 full-ride scholarships for under served students and for ongoing academic programs.

“Our Nevada State College Foundation board members are the engine powering our fundraising efforts, and they aren’t slowing down any time soon,” Nevada State College President Bart Patterson said. “Already, the foundation is making a huge direct impact on our community by providing a traditionally under served population with an exceptional education on a beautiful campus.”

The new “50 for $2 million” campaign seeks 50 donors to raise $2 million for scholarships within the year. The campaign kicked off in April and already has raised $800,000.

The Comprehensive Capital Campaign Committee, chaired by Glenn Christenson, also plans to launch the Education Building Campaign, which aims to raise $6 million for a new School of Education building. The committee already has identified $1.5 million before the launch set for Jan. 1, 2017.

Patterson said the college’s fundraising success has come from finding people with strong strategic planning skills, vision and a penchant for constantly recruiting new, equally strong people to serve on the foundation board. As a condition for joining the board, each member donates or raises $5,000 a year for the college.

About Nevada State College
Nevada State College, a four-year public institution, is a member of the Nevada System of Higher Education. NSC places a special emphasis on the advancement of a diverse and largely under-served student population. Located on a developing 500-acre campus in the foothills of Henderson, Nevada, the college was established in 2002 as a new tier in the state system between the research universities and the two-year colleges. In this role, the college emphasizes high-quality instruction, exemplary service, engaging learning experiences, and innovation as a means to more efficient, effective outcomes in all corners of the campus. Since 2002, Nevada State College has grown to offer more than 40 majors and minors, has received independent accreditation and has expanded its physical campus. Committed to fostering a personal learning environment, students are taught by faculty who serve as mentors and guides in classrooms with an average class size of only 27 students. Nevada State College serves approximately 3,400 students and has over 3,000 alumni, each representing a broad array of cultural and economic backgrounds. For more information, visit http://nsc.edu.