You are here: Home / Press Release Wire / Nevada Improves in 11 of the 16 Indicators of Child Well-Being 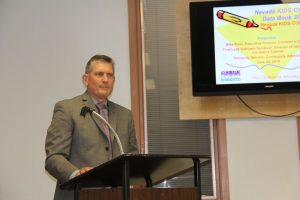 Although, nationally, many child well-being indicators improved since the recession, the U.S. child poverty rate increased from 18 percent in 2008 to 22 percent in 2014. The rate has proven to be somewhat intractable, as the 2014 rate, the latest data available, remained unchanged from the prior year.

Despite the challenging economic climate, the Data Book finds youth are healthier and more likely to graduate high school on time than teens of six years ago. Generation Z teenagers, the group that follows the Millennials, saw improvements in teen birth rates, the percentage of teens abusing drugs and alcohol and the percentage of high school students not graduating on time.

“Our community must fulfill the role of providing children and youth with the educational and economic opportunity that they deserve,” said Kathleen Sandoval, Director of Operations for The Children’s Cabinet.
In attendance were members from the National Council of Juvenile and Family Court Judges (NCJFCJ), Renown, the State of Nevada and Washoe Tribe Family Services.

State Rankings for the 2016 Data Book
Nevada ranks 47th among the states in overall child well-being, the same position as last year. Of the four domains that comprise overall child well-being, each including four indicators, Nevada ranks 40th in health; 40th in economic well-being; 44th in family and community; and 49th in education. Nevada’s ranking improved over last year on all domains with the exception of family and community. Notable is Nevada’s economic well-being domain ranking, which rose from 46th to 40th place since the 2015 Data Book.

The three top-ranked states for overall child well-being are Minnesota, Massachusetts, and Iowa. Louisiana, New Mexico, and Mississippi are the three lowest-ranked states.

The following presents selected child well-being indicator trends for Nevada:
In 2014, 22 percent of Nevada children under age 18 lived in poverty, increasing from 15 percent in 2008 (a 47 percent increase). Nevada ranks 29th among the states on this indicator. The poverty rate decreased by 1 percentage point from 2013 to 2014.

In 2014, 10 percent of Nevada children under age 18 were not covered by any health insurance, decreasing from 20 percent in 2008 (a 50 percent decrease). Nevada ranks 47th on this indicator.

Rennae Daneshvary, director of Nevada KIDS COUNT said, “Similar to Generation Z teenagers nationwide, teenagers in Nevada experienced improvements in birth rates, drug and alcohol abuse levels and in high school students graduating on time. Our teenagers appear to have made prudent choices during our state’s economic recovery from the Great Recession. Many, however, will continue to face difficult challenges because of their economic status. Nevada’s 2014 child poverty rate improved slightly from 2013 and significantly worsened since 2008 – 144,000 Nevada children live in poverty.”

The 2016 Data Book is available at www.aecf.org. Additional information is available at http://databook.kidscount.org, which also contains the most recent national, state and local data on hundreds of indicators of child well-being. The Data Center allows users to create rankings, maps and graphs for use in publications and on websites, and to view real-time information on mobile devices.

The Annie E. Casey Foundation creates a brighter future for the nation’s children by developing solutions to strengthen families, building paths to economic opportunity and transforming struggling communities into safer and healthier places to live, work and grow. KIDS COUNT® is a registered trademark of the Annie E. Casey Foundation. For more information, visit www.aecf.org.