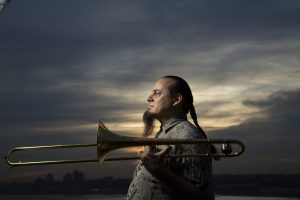 A member of the “Saturday Night Live” band since 1984, Steve Turre is one the world’s preeminent jazz innovators, trombonists and seashell musicians, consistently winning readers’ and critics’ polls in JazzTimes, Downbeat, and Jazziz for Best Trombone and Best Miscellaneous Instrumentalist, the latter for his work with shells. He has worked with Jazz, Latin and Pop musicians including Ray Charles, Woody Shaw, Dizzy Gillespie, Herbie Hancock, Tito Puente and Van Morrison.

“We’re excited to bring the talent and innovativeness of Steve Turre back to Las Vegas since last performed here with Ray Charles in 1972,” said Michael Evans, who’s producing the concert and conducting the 18-member band of local professional musicians. “The audience will hear never-heard-before stories from Steve’s storied career, instruments you had no idea could be played, and music from a big band with enormous solos, explosive high points and a beautiful soulful calm.”

Evans and his eponymously named band have been performing since 2014, creating innovative live music experiences across many genres. A respected musician locally and internationally, at age 30, he is the youngest Big Band director in Las Vegas. With a background in trombone and a UNLV music degree, Evans has been a professional musician, chart writer, composer and teacher for the past 15 years, and has played in Las Vegas Strip shows, including Smokey Robinson Presents: Human Nature, Vegas The Show, Pin Up, Zombie Burlesque, Boys II Men, B.B. Kings Blues Club, and Four Tops. He’s currently performing with The Scintas at the Plaza.

The cost of Mevans Live presents – Steve Turre with the Michael Evans Big Band featuring Sandy Wyatt of “Hitzville the Show” is $22 per person. Tickets can be purchased at http://www.unlv.edu/pac. For information, email pacboxoffice@unlv.edu.
# # #