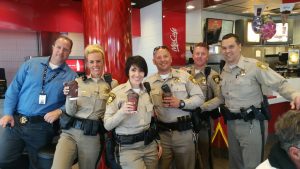 McDonald’s invites all community members to visit Southern Nevada restaurants on Tuesday, May 17 for a special fundraising event. During National Police Week, McDonald’s Southern Nevada owner/operators will donate net proceeds from the sale of each coupon card sold to the Injured Police Officer’s Fund.

Officers will be at select Southern Nevada McDonald’s locations during times noted below.

Local McDonald’s owner/operators aim to provide continued support to valued community partners like the Injured Police Officer’s Fund and are proud to provide support where it is needed most.

The mission of the Injured Police Officer’s Fund is to help reduce the financial burden suffered by police officers and their families in the event of a line of duty injury or death.

For more information about this event, or to schedule an interview, please contact
Tiffany Ramsey at (702) 433-4331 or tiffany@massmediacc.com

McDonald’s USA, LLC, serves a variety of menu options made with quality ingredients to more than 27 million customers every day. Nearly 90 percent of McDonald’s 14,000 U.S. restaurants are independently owned and operated by businessmen and women. Customers can now log online for free at approximately 11,500 participating Wi-Fi enabled McDonald’s U.S. restaurants. For more information, visit www.mcdonalds.com, or follow us on Twitter @McDonalds and Facebook www.facebook.com/mcdonalds.