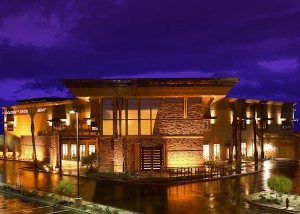 LAS VEGAS – Golden Entertainment, Inc. (NASDAQ:GDEN) (“Golden” or the “Company”) announced it had entered into a definitive agreement to acquire substantially all of the assets of Amusement Services, LLC (“Amusement Services”). Amusement Services is one of the largest distributed gaming operators in the state of Montana and currently operates more than 1,800 gaming devices located in approximately 180 retail locations across the state, including five Native American locations with contracts that comprise approximately 350 gaming devices.

“When considered with our January acquisition in Montana, we continue to demonstrate our ability to build and strengthen leadership positions in key attractive markets. When the transaction closes, we believe the Company will have a leadership position among the largest distributed gaming operators in Montana,” said Blake L. Sartini, Chief Executive Officer of Golden. “Montana is an attractive distributed gaming market, and with an enhanced footprint in the region, we are well positioned to capitalize on this opportunity.”

The transaction is subject to customary closing conditions and is expected to close by the end of April. The Company plans to fund the approximately $25 million acquisition price through available borrowings under its revolving credit facility. Upon closing, management expects the acquisition to be immediately accretive to the Company’s earnings per share.

Similar to the previous distributed gaming acquisition in Montana, this acquisition will combine the sellers’ local relationships with Golden’s operational expertise, establishing a wider footprint across Montana. “For over 10 years, Amusement Services has been providing distributed gaming solutions in Montana. The opportunity to join the Golden team and continue to add value for our customers and team members is an exciting prospect,” stated Tim Carson, Co-Founder and President of Amusement Services. When the transaction closes, Mr. Carson will join the Company as the Vice President of Montana Operations, helping to ensure an effective management transition and operational continuity.

This press release may be deemed to contain forward-looking statements regarding future events and our future results that are subject to the safe harbors created under the Securities Act of 1933 and the Securities Exchange Act of 1934. Forward-looking statements can generally be identified by the use of words such as “anticipate,” “believe,” “continue,” “could,” “estimate,” “expect,” “forecast,” “intend,” “plan,” “project,” “seek,” “should,” “think,” “will,” “would” and similar expressions. In addition, forward-looking statements include statements regarding the Company’s strategies, objectives, business opportunities and plans for future expansion, developments or acquisitions, anticipated future growth and trends in the Company’s business or key markets, projections of future financial condition, operating results, income, capital expenditures, costs or other financial items (including earnings per share accretion), anticipated regulatory and legislative changes, the Company’s ability to utilize its net operating loss carryforwards (“NOLs”) to offset future taxable income, the timing and amount of distributions to the Company’s shareholders of the net proceeds from the sale of the subordinated promissory note from the Jamul Indian Village, as well as other statements that are not statements of historical fact. Forward-looking statements are based on the Company’s current expectations and assumptions regarding the Company’s business, the economy and other future conditions. These forward-looking statements are subject to assumptions, risks and uncertainties that may change at any time, and readers are therefore cautioned that actual results could differ materially from those expressed in any forward-looking statements. Factors that could cause actual results to differ include: the parties’ ability to satisfy the closing conditions to the pending acquisition of distributed gaming assets, the Company’s ability to realize the anticipated cost savings, synergies and other benefits of the merger of a wholly owned subsidiary of the Company with and into Sartini Gaming and the acquisitions of distributed gaming assets in Montana, and integration risks relating to such transactions, changes in national, regional and local economic and market conditions, legislative and regulatory matters (including the cost of compliance or failure to comply with applicable laws and regulations), increases in gaming taxes and fees in the jurisdictions in which the Company operates, litigation, increased competition, the Company’s ability to renew its distributed gaming contracts, reliance on key personnel (including our Chief Executive Officer, Chief Operating Officer and Chief Financial Officer), the level of the Company’s indebtedness and the Company’s ability to comply with covenants in its debt facilities, terrorist incidents, natural disasters, severe weather conditions, the effects of environmental and structural building conditions, the effects of disruptions to the Company’s information technology and other systems and infrastructure, the occurrence of an “ownership change” as defined in Section 382 of the Internal Revenue Code, and factors affecting the gaming, entertainment and hospitality industries generally. In addition, please refer to the risk factors contained in the Company’s SEC filings available at www.sec.gov, including the Company’s most recent Annual Report on Form 10-K. Readers are cautioned not to place undue reliance on any forward-looking statements, which speak only as of the date of this press release. The Company undertakes no obligation to revise or update any forward-looking statements for any reason.

For over 10 years, Amusement Services, LLC has been providing customers in the state of Montana with casino and entertainment solutions including the installation and operation of gaming and amusement devices, as well as maintaining ATM machines. Amusement Services is headquartered in Billings, Montana.