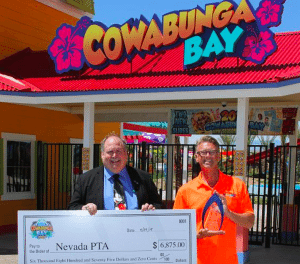 Award winning Cowabunga Bay water park, excited for its 3rd season of 130 days of family friendly entertainment, will kick off its Cowabunga Cares initiative on March 12 to benefit several children’s non-profits in the community. The first non-profit fundraiser of the season will host a private event to benefit its annual partner, the Nevada Parent Teacher Association. PTA members and families are able to enjoy the sprawling 23-action packed acres filled with more than 20 state-of-the-art water and thrilling attractions, prior to the park opening to the public on Saturday, March 19.

“We are grateful to the community and have welcomed partnerships not only with local non-profits, but also health and government organizations such as the Henderson Fire Department, Roseman University and HealthCare Partners.” says Shane Huish, General Manager of Cowabunga Bay Waterpark. “We are pleased to provide an added training environment for these entities such as swift water rescue, nursing/CPR, and a family audience to share informative resources. Our entire staff is pleased to be involved and contribute back the entire summer with our new Cowabunga Cares program that will benefit causes that impact southern Nevada.”

In 2015, Cowabunga Bay donated its park to more than 3,000 Nevada PTA families for a day of fun and also donated a $6500 check to the PTA too support education and family involvement. In recognition of his contribution, Dave Flatt, President of Nevada PTA presented Cowabunga Bay General Manager Shane Huish with the “Outstanding Vendor of the Year” award.

“Providing an event where we can assemble our members and friends for a day in the water has been an incredible experience for everyone involved.” says David Flatt, President Elect of the Nevada PTA. “We know our teachers and parents work diligently throughout the year to enrich the lives of the children of Nevada, and it is so very special for us and the vendors we work with, like Cowabunga Bay, to provide a simple ‘Thank You’ for all they do year after year.”

Cowabunga Bay Waterpark, located at 900 Galleria Drive in Henderson, is the largest waterpark in Nevada filled with an expansive collection of state-of-the-art thrill rides. Featuring more than 20 slides and attractions, it is the ultimate in family and guest entertainment. For more information on hours, opening dates, and purchasing tickets and season pass information please call 702.850.9000 visit www.cowabungabay.com/LasVegas. Follow us on Twitter and Instagram at @cowabungabaylv and friend Cowabunga Bay Waterpark on Facebook www.facebook.com/CowabungaBayLasVegas.