You are here: Home / Features / Building Nevada / Commercial Real Estate in Nevada: Then and Now 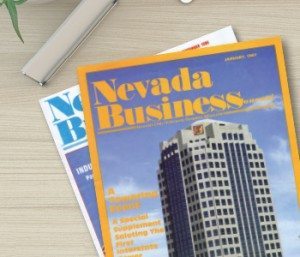 Thirty years ago, the Las Vegas Strip was a different Strip than today. Technology companies had yet to discover Nevada. Cell phones were rare. Businesses relied on PBX rooms for their telecommunications and if one part of the system failed, the others continued because everything didn’t depend on an IP framework to run all systems together.

Thirty years ago, industrial office parks were a new idea, we were learning economic diversification was necessary, not just desirable, and Nevadans sometimes considered the state “recession proof.”

Welcome to the future. We don’t have flying DeLoreans, although we do have hoverboards, sort of. The Las Vegas Strip now includes the Mirage, Bellagio, Luxor and parts of the Fountainbleu. We expect mobile devices to work wherever we are, industrial parks span large acreages and data centers and other technology companies are locating to Nevada because of the relatively low number of natural disasters. Far from being safe from recessions, we have experience leading the nation in foreclosures for more than 60 months.

Since 1986, we’ve seen 30 years of boom and bust in all sectors, including commercial real estate.

Growth Through the Years

Northern Nevada saw some activity in 1986. “New office complexes being built, some retail and some warehousing. Warehousing has always been kind of an ongoing deal in Northern Nevada and was growing,” said Norm Dianda, president and CEO, Q&D Construction. “We were doing work for St. Mary’s Hospital expansion. We were fairly busy. One thing about the Reno area, we had some pretty continued growth.”

Today’s healthcare industry is still expanding, especially in Southern Nevada where there’s a strong in-migration of seniors. But for the most part in 1986, the population wasn’t strong enough to support many sub-sectors. Since then, we’ve seen development of the UNLV Harry Reid Research and Technology Park and the 1.4-million-square-foot Hughes Center at Paradise and Flamingo, according to Terry Wright, chairman of the board, Nevada Title Company.

In 1986, Martin-Harris Construction was working on a variety of retail projects including Green Valley Shopping Center, and niche businesses like printing houses and manufacturing facilities. In Summerlin, the firm built the first employment center, medical and office buildings. “In the late ‘80s and ‘90s, there was a tremendous amount of building in Green Valley,” said Frank Martin, president.

In the 1980s, Las Vegas was a smaller town. There was no office space south of McCarran Airport and the city ended at Rainbow to the west, said Tom Thomas, managing member, Thomas & Mack Development Group. “Areas like Summerlin didn’t exist, Green Valley was a very small development compared to what it is now.”

In the early 2000s, Lyon County in Northern Nevada was the second fastest growing county in the country. In the late 1980s, Las Vegas began a steady growth climb, on lists as first, second or third in growth out of all U.S. cities. Thousands of people moved to Southern Nevada every month and the commercial property industry grew steadily into the 1990s – when things went a little crazy, said Dwayne Miller, CEO, JBA Consulting Engineers.

Infrastructure had to be updated. When new casinos came online, there were industrial and commercial buildings to support them with tens of thousands of workers there. “It wasn’t just increased industrial construction to support the hotels, but to support the workers. Our workforce was growing at 6 percent a year for almost 20 years – the highest in the nation,” said Wright.

By 1986, JBA had been in Southern Nevada for 20 years and worked on the Stardust, the Desert Inn and Caesar’s Palace. There was growth on The Strip. “It was usually a project at a time, maybe two projects going at a time, and then in early 2000 it just seemed like it went crazy,” said Miller. “At that point, it was multiple projects all going at the same time.”

That proved to be a trend that continued into the 2000s when JBA worked at the same time on Encore, Echelon, Fountainbleu and City Center. “I think that’s probably something like $15 billion in construction dollars that was all underway, probably closer to $20, which is insane,” said Miller.

There was a practicality in the market through the 90s and into the early part of the 21st century when the housing boom and Southern Nevada’s big condominium boom hit, right before the economic downturn did.

Today new apartments are being built in southwest Vegas and Henderson, but during the recession, it was a different story. “I don’t know how many unoccupied condominiums we had underwater,” said Wright. “It was terrible. CityCenter and Oasis Gateway had a ton of them.”

The recent recession doesn’t mark the only period of time when Nevada’s seen a slump, empty condominiums and boarded up houses.

“We went into business in 1977 in a big, big downturn like the one we’ve seen in the last seven or eight years,” said Martin. “There were a lot of houses boarded up all over Las Vegas in 1978. The percentage of houses boarded up versus houses being lived in was the same [as during the latest recession] but there were less houses in Las Vegas by far.”

People are returning, the price of Nevada housing is climbing and there’s a boom on multifamily houses. “Financing is still very good and available, and the industry is experiencing a very low vacancy rate and very high occupancy rate,” explained Martin.

In the early ‘80s, the first planned community in Southern Nevada launched with Green Valley. Planning for Summerlin started in the 1980s and construction launched in 1990. Today Summerlin’s population is more than 100,000.

Building practices have changed. During the building boom, it wasn’t unusual for developers to move from huge project to huge project. At the same time, infrastructure had to be updated to keep pace with growth.

“There really was a cohesiveness, not that corners were being cut, but the level of conversation between the approval agencies, the building departments, they were very flexible, open to being involved in the process and helping from the approval standpoint. We would do things here in 24 months that anywhere else in the country would have taken three, four years,” said Miller.

When the events of 9/11 caused an economic downturn, Las Vegas was one of the first places to recover, in part because there were a number of projects in progress that just couldn’t stop. But when the 2008 global financial crisis hit, everything stopped.

“We had Echelon going, Fountainbleu going, Encore we were wrapping up, and work on other properties, and that all went away in a period of about three months, just evaporated,” said Miller. Fortunately for JBA, they had work in Dubai and Asia. However, one effect of the recession was the experienced and educated workers Nevada had gained during the boom left the state to seek work elsewhere.

“Up until the last recession started, Reno was always in a position that was mostly local developers and we were never really overbuilt,” said Dianda. “What happened with this last recession, we had a lot of national developers in here and things got overbuilt so that made it pretty tough up until about 2012. Then things started to loosen up and, like today, there’s a lot of activity going on. I think Reno is in a position where it will continue to have some good and well-managed growth.”

“Well managed” being a key phrase. Nevada’s most recent boom and bust cycle made the state number one at both ends of the spectrum – first the leader in growth during the housing boom of the late 1990s and early 2000s, then top of the lists for foreclosures when the bust occurred.

This time, if there’s a boom coming, said Wright, “It’s going to come from places like Amazon that are doing so well shipping that people don’t even go to brick-and-mortar stores anymore. They’re not going to ship from one location, they’ll need to have locations all over the country.” Both Northern and Southern Nevada are located to take advantage of easy distribution to the western states.

We Built It, They Came … Eventually

In 1986, Nevada didn’t have a tech industry, but both metro areas wanted one.

“There really wasn’t a tech industry at all,” said Martin. “Closest thing to anything tech-wise was generally in gaming establishments. We had Walker Duct and Underfloor steel conduit system, electronic monitoring systems to the slot machines, but even in the mid-80s, use of high tech anything didn’t happen. When we built Jerry’s Nugget, they still used catwalks in the attic because there weren’t surveillance cameras sophisticated enough,” he added.

“Fast forward to now,” said Miller, “properties can’t operate without the data center. The reliance on technology is not only for business operations, the end user experience has changed exponentially. You walk into a building now with a handheld device, you expect it to just work on the infrastructure that’s there.”

Where systems used to be separate, now one system runs everything. “So if you have a failure where your data center goes offline, you basically can’t continue business operations,” added Miller.

Once it became clear if one system failed, everything failed, business owners started wanting the systems off property for security. Enter the data center, which is ideally located in Nevada because of the comfortable climate which makes environmental controls less costly, and for the state’s relative lack of natural disasters.

Pair data centers with all the cloud computing, said Miller, and it’s a different environment for commercial real estate development. “Infrastructure requirements are all changed. It’s been a major, major shift really within a decade or 15 years, with different emphasis placed on technology with design.”

Rules and Regulations, Practices and Procedures

Technology changed the face of commercial real estate, as well as did continuing growth at both ends of the state. In 1986, Martin-Harris Construction was negotiating to build the Green Valley Athletic Club. “At the time it was the single biggest structure built in Henderson, Nevada, and we got the building permit in 10 days,” said Martin. “Today that would take six to 10 months. There’s that many more rules and that many more people to enforce the rules.”

Building requirements in Northern Nevada are more stringent than they were in the 1980s and getting a permit in those days wasn’t easy to do. “We had a council at that time that had kind of a no growth attitude, so it was very difficult to get a building permit. I guess they were shorthanded, too, so it was a hassle to get anything done. Today, in my opinion, it’s improved,” said Dianda

Building engineering has also changed. In the mid-1980s, a tall warehouse was 20 feet high. Today, it might be 35 feet. They’re still tilt-up concrete, said Martin, but the engineering’s more sophisticated, the codes are more stringent and the rule of thumb is to use as much pre-manufactured material as possible to save on-site hours.

Another change in commercial real estate development happened when Nevada shifted from the Uniform Building Code to the International Building Code.

“From my perspective, it didn’t change the safety of buildings and was not really a necessary change,” said Thomas. Developers already had good, adequate codes and were less than enthused at the change.

LEED certification for environmental building standards came and went quickly in Nevada, where developers looked closely at the standards and the points necessary to obtain LEED silver or gold ratings, and decided meeting standards meant for Chicago or Michigan made no sense in Nevada.

“We needed to develop southwest standards and rather than focus on all LEED point systems, most of us continued to develop with best practices of the southwest,” said Thomas.

The last 30 years has seen Nevada’s population change from 980,614 in 1986 to 2,890,845 in 2016. Commercial real estate across the state has experienced booms and busts and largely survived the recession.