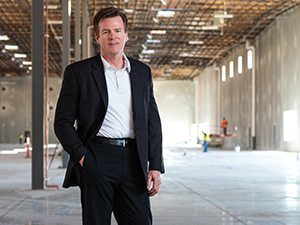 As the welcome sights and sounds of industrial construction continue to pop up all around the Silver State, business decision makers agree that economic good times are coming back. With 200 million square feet of development sprinkled around the U.S., Europe and Canada, developers at Panattoni Development Company, Inc. are happy to have stuck with in Nevada for 17 years.

“From a macro standpoint I feel pretty good about Nevada. The years 2015-2016 will be our best years since our being in Nevada,” says Doug Roberts, company partner. “We do pretty large projects, but the smaller developers haven’t come back yet. There’s an unmet need for $5-to-10-million projects.”

With 2016 promising to be a light at the end of the development tunnel for commercial construction, Nevada’s developers are still optimistic about the attractiveness of the state as a good place for businesses to set up shop. The business-friendly qualities that have successfully lured entrepreneurs to the state in the past have kicked in again. Nevada touts its geographic location, forgiving tax structure, quality of life and hassle-free permitting processes, among others, as major advantages in attracting new companies and retaining existing ones in the state. However, even though demand is up and the future looks rosy, developers say they have concerns about not having enough available land, streamlining processes, building to meet current tenant demands and diversifying the mix of enterprises.

Like his counterparts in other development companies, Jeff Foster, vice president-market officer for Prologis is bullish on the current industrial development market in Nevada. “The economy is still in recovery, but we have almost transitioned to expansion mode. The Las Vegas market was the last to take part in the recovery. We’re doing expansion and new business development,” he said. “With vacancy rates approaching 5 percent, it looks like we could have a record year for net absorption.” With $57.2 billion in total assets under management in 21 different countries, Prologis is one of the big players in industrial development in Nevada.

Capitalizing on their history in the state, Panattoni is basking in significant projects in both Northern and Southern Nevada. The building climate has improved with increased demand for industrial space, as well as the increased availability of financing.

“It always comes down to capital and capital partners. The lending environment is greatly improved,” Roberts said. He explained that the company has found a win-win relationship with pension funds through LaSalle Investment Management. “It’s an opportunity for a pension fund to become diversified.”

Panattoni projects in Southern Nevada include Jones Corporate Park, which consists of two buildings totaling 416,000 square feet located at the northwest corner of Sunset Road and Jones Boulevard. Roberts said 30 to 40 percent of the location is expected to be pre-leased by March. Panattoni’s Henderson Freeway Crossings consists of six buildings totaling 450,000 square feet located near the Henderson Spaghetti Bowl. Although this project is a little behind schedule, it’s expected to be delivered to the market in May. Just last month, Panattoni significantly increased its holdings in Southern Nevada with the purchase and partial lease back of the IGT manufacturing campus and operating headquarters on Buffalo Drive. Roberts said that Panattoni will reposition the investment as a multi-tenant property available for lease.

The company’s projects in Northern Nevada include Red Rock 200 on Red Rock Road with around 200,000 available square feet and the North Valleys Commerce Center Building B at North Virginia Street and US 395 which offers around 707,000 square feet.

Notable Dermody development in Northern Nevada includes LogistiCenter at 395 Phase 1-Buildings A and C located in the North Valleys submarket. Other development is taking place at LogistiCenter at 395 Phase 2 which is a 1.6-million-square-foot, multi-building industrial park located about a mile and a half from Phase 1. The first building in Phase 2, will be completed in May with Marmot outdoor clothing company leasing 270,000 square feet. The remaining development in Phase 2 will be completed in either two or three phases depending upon tenant requirements. A similar property in Southern Nevada includes LogistiCenter at Cheyenne which contains 381,804 square feet on 20 acres in the North Las Vegas industrial submarket. The center was completed in September last year and is fully leased to Southern Enterprises and Priority Wire & Cable.

Panattoni recently purchased a 20-acre parcel of land on Sandhill Road in Reno’s South Meadows where it plans to construct two buildings totaling around 390,000 square feet which it will deliver to the market in Q3 this year.

Roberts is especially pleased with the acquisition of the Sandhill property as he cited the shortage of appropriate land as becoming a problem in commercial development. “Finding land is becoming more of an issue. Major impediments are that it’s not zoned correctly or it doesn’t have utilities,” he said. Large companies like Panattoni are better positioned to be able to acquire good parcels when they come on the market, however. “We know more than the average bear because we work with realtors,” he said.

Pleasing today’s tenants can also present challenges because of the way business is conducted now. “We have to build buildings with more parking and they’re prettier buildings. This is the face of the company because there are no storefronts,” Roberts explained. Also because many companies are concerned about being able to attract qualified employees they want their physical location to be attractive to them. “They want their employees to feel comfortable and happy at work,” he added.

Despite having a number of big projects humming through the Prologis pipeline, Foster said he still has concerns and challenges along the way. “The biggest challenge is being able to hit the timing requirements. Larger users have to use new construction. It brings a sense of urgency to all parties involved. It behooves everybody to streamline the process,” he said. “Everyone benefits the quicker we get these projects up and running.”

Although commercial development is dominated by the big players now, Foster still has nagging concerns about the market overbuilding itself like in the boom days a decade or so ago. He conceded this is less likely to happen now, however, because there are fewer small builders in the game. “We’re building into a phase of equilibrium and hopefully we won’t overdo,” he said.

With diversification as a major goal of most economic developers, Foster said the decision makers in Nevada have done a good job in recent years to bring an increasingly varied array of businesses into the state. Prologis casts a wide net which includes solar related industries, supply chain distribution companies, tourist oriented enterprises and housing related businesses. “It runs the gamut,” he said.

Even as the cash-strapped City of North Las Vegas continues to smart from the consequences of the recent recession, Mayor John Lee is optimistic that efforts to bring commercial development to the area will finally pay off.

“2016 is going to be really positive,” he said. For the past several years, Lee has had to cut expenditures to the bone and streamline all processes in the city. “We had to take a look at a forensic type of accounting and assess how we could do things better. We’ve been working with vendors to get current with things. We’re looking at government like a business,” he said.

While keeping a vigilant watch on the financial health of the city, Lee has joined with other economic movers and shakers in the region to roll up their sleeves and get serious about bringing meaningful development to the area.

“My goal is to see if we can get more industrial development which will create more employment,” he said. Hopes are high that Apex Industrial Park will deliver the goods and the outlook so far is good. The recently announced $1 billion, 900-acre Faraday Future deal is one of the projects moving the area forward. The City of North Las Vegas annexed Apex into its jurisdiction which should give the advantage of fast tracking the permitting processes that can often times be cumbersome. With more than 2,000 acres primed for development, Apex can roll out the welcome mat for 40 million square feet of industrial space. As raw land, the park is amenable to a wide variety of uses and construction types.

Other projects in the works include the acquisition and development of a 150-acre site adjacent to the VA Southern Nevada Healthcare System. “It could be a medical job creation zone,” Lee said. He envisioned it as a hub of additional healthcare offices along with medical research locations connected to the University of Nevada, Las Vegas. In addition, economic developers are eyeing a 1,000-acre parcel at the intersection of the 215 Beltway and the I-15 for development as a business park.

With 104,000 acres east of Reno/Sparks along I-80, Tahoe-Renoe Industrial Center (TRIC) is indisputably the largest industrial park in the country. Now home to more than 100 businesses who list alphabetically from 1-800 Flowers.com to Zulily, Inc., TRIC is now considered the prestige address for many types of enterprises. Since landing the big fish, Tesla, interest in the center, and in Northern Nevada in general, has exploded. Developer Lance Gilman now spends time conducting tours of the massive site for prospective tenants as well as tourists. Other big fish, in addition to Tesla, who’ve been hauled into the net recently include eBay and SWITCH, who followed Tesla’s lead in receiving lucrative tax incentive packages. TRIC is definitely on a roll and everyone with a vested interest, including Nevada’s taxpayers, hopes it continues.

As 2016 unfolds, it’s clear that those in Nevada development are looking forward to a year of positive economic progress. When analyzing the myriad projects that are taking fruit in the Silver State, it seems like many hopes and dreams are now realities, with much more to come.

“I’m very optimistic about 2016. Leaders in business are making good, frugal decisions. It will be a banner year for businesses that are well run,” Lee said.