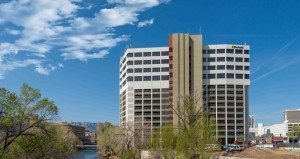 Basin Street Properties, a prominent Northern Nevada real estate investor and developer, has signed a lease with the National Council of Juvenile and Family Court Judges (NCJFCJ) for 14,699 square feet in its 300 East Second Street building in downtown Reno, Nevada. The NCJFCJ focuses on improving the effectiveness of our nation’s juvenile and family courts. A 2,000 member organization, the NCJFCJ provides continuing education, research, and policy development in the field of juvenile and family justice. The NCJFCJ is unique in providing practice-based resources to courts and communities nationwide. The upcoming move will bring 300 East Second Street to over 90% occupied and contributes to Class A office space vacancy dropping to 10.62% in downtown Reno.

“We’re really honored to have the NCJFCJ as a tenant,” said Par Tolles, President of Basin Street Properties. “They do such meaningful work and it’s a source of pride to see a Reno-based entity having a positive national impact on juvenile and family issues.” For years, the NCJFCJ has had two separate offices in Reno, one on campus and the other downtown. When asked about the move, the NCJFCJ’s CEO Mari Kay Bickett said, “Combining our two offices into one leads to more productivity, less commuting time back and forth and a true collaboration of all staff in one location.” The NCJFCJ will continue to be an affiliate of the University of Nevada, Reno and will continue to provide the nation’s only advanced degree program for judicial studies.

Since 1969, the NCJFCJ has had a longstanding and valuable relationship with the University of Nevada, Reno. “More judicial officers are educated in Reno than any other place in the world,” said Bickett. Every year, the NCJFCJ convenes more than 300 judicial officers in Reno through various educational programs. The NCJFCJ recently convened the inaugural National Judicial Institute on Domestic Child Sex Trafficking in Reno. Annually, the NCJFCJ convenes judges and their teams from all eleven Nevada judicial districts to improve the principles of quality hearings and enhance practices throughout every judicial district in Nevada.

“Although the NCJFCJ’s mission has and will always be to provide knowledge and education to improve the lives of families and children who seek justice, our areas of focus continue to expand and evolve,” said Bickett. Areas of focus include domestic child sex trafficking, child abuse and neglect, domestic violence, keeping kids in school and out of court, military families, juvenile drug courts, adoption and foster care, juvenile justice and trauma-informed courts.

“One of the biggest challenges facing the NCJFCJ is to help the public understand how a healthy court system affects their everyday life. Nearly everyone will have an experience with a family member, friend, employee or colleague that has interacted with the judicial system,” said Bickett.

The NCJFCJ will always be on the forefront of topics that affect children and families who seek justice. Some of the NCJFCJ’s most recent initiatives include:
• Joined five other national organizations to address the use of restraints on incarcerated women and adolescents
• Launched a new resource center to help implement positive school discipline reforms and reduce the school-to-juvenile justice pathway.
• Passed five resolution and policy statements in 2015, including the shackling of children in juvenile court and trauma-informed juvenile and family courts

The NCJFCJ is a non-profit that relies on funding from federal and state grants, private foundations and generous members and donors. 2015 delivered a record $11.3 million in funding, but the NCJFCJ continues to depend on these contributions from members and donors. This support benefits the NCJFCJ’s research, advocacy, and education efforts, focused on improving the lives of our most vulnerable children and families.

When asked about their staffing, Bickett responded, “The NCJFCJ has more than 60 employees located in Reno and more than 20 employees in Pittsburgh at our research arm, the National Center for Juvenile Justice (NCJJ), the oldest juvenile justice research group in the nation.” There are regular job opportunities available with the NCJFCJ including an active internship program with the University of Nevada, Reno that has resulted in the hiring of several graduate research interns. “The NCJFCJ being downtown at 300 East Second strengthens the connection between downtown Reno and the UNR campus,“ said Tolles. “And it brings a nationally renowned institution into the diversifying economic base of downtown Reno.” Visit the employment section of the NCJFCJ website for details about working with the NCJFCJ and current job opportunities. The NCJFCJ currently employs nearly 20 UNR graduates including their CEO, Mari Kay Bickett, JD.

Basin Street Properties owns and manages 723,646 square feet of Class A office space in Reno and is heading up the 3rd Street Flats and Courtyard Reno Downtown projects. Representing Basin Street Properties was Dominic Brunetti and Scott Shanks of Dickson Commercial Group. The NCJFCJ was represented by Tim Ruffin of Colliers International.

Founded in 1937, the Reno, Nevada based National Council of Juvenile and Family Court Judges, is the nation’s oldest judicial membership organization and focused on improving the effectiveness of our nation’s juvenile and family courts. A leader in continuing education opportunities, research, and policy development in the field of juvenile and family justice, the 2,000-member organization is unique in providing practice-based resources to jurisdictions and communities nationwide.