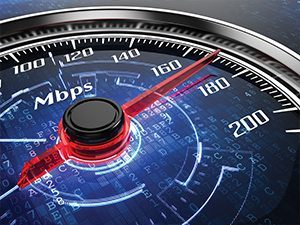 A Southern Nevada-based radiology practice of more than 60 physicians with numerous offices uses a custom-designed network linking all locations, including the physicians’ homes, in order to read films there any time of the day or night when on call. The technical arrangement demands an ultra high-speed connection. Cox Communications, a broadband communications and entertainment company, provides the connection for the group. Capabilities such as being able to remotely access data via an Internet-connected device, electronically communicate with and share information between various locales and more are possible today because of advancements in telecommunications technology that have burgeoned in only the past five to 10 years.

“It’s unbelievable where the technology has taken us and how technology has transformed how companies do their businesses,” said Mike Bolognini, vice president and market leader at Cox Las Vegas.

In contrast, 35 years ago, most information (x-rays, reports and the like) in physical form shared between one radiology group’s offices and those of its patients’ referring physicians, was courier delivered. On-call generalist radiologists stayed all night at the hospital to read films when needed.

Back in 1985, Nevada businesses didn’t have Internet access, smartphones or even fax machines, cellular technology and computers were in the nascent stage and only basic video cable was available. Companies communicated primarily with customers via landline telephones, which relied on copper wires laid under the streets, along with telex machines for sending text-based messages. Some larger firms had a PBX (private branch exchange), which, acting as a telephone switch, connected employees internally with one another and outside callers to employees. Most of the telecommunications providers in the Silver State then, which included Nevada Bell, Cellular One and Nextlink, are no longer around today, having been acquired in the interim.

“The advances have been massive and numerous,” said Dave Collier, president of the Nevada Telecommunications Association (NTA), a communications industry group that supports its member organizations through regulatory, legislative and public relations advocacy and provides a forum for education and information exchange between members and suppliers. NTA is comprised of 11 local Nevada exchange carriers and 41 associate members, largely suppliers.

Voice over Internet Protocol (VoIP) has transformed businesses, Bolognini said. VoIP allows voice calls to be made using a broadband Internet connection versus an analog phone line by converting one’s voice into a digital signal that travels via the Web. Think Skype but on a grander scale and with additional features like call rerouting to a cellphone or home phone, data storage to the cloud and real-time remote problem resolution by telecommunications companies.

Vonage’s technology, for instance, is VoIP-based. The company offers businesses cloud-based voice, data, Internet and video services delivered in one of three ways: piggybacking on a customer’s existing broadband connection, Vonage’s own multiprotocol label switching (MPLS) network or via the customer’s own, dedicated MPLS or T1 line.

“Whether in the office or elsewhere, any device with an IP (Internet Protocol) address works with our platform, and we connect all of them together,” said Clark Peterson, president of Vonage’s Business Solutions Group.

The use of the Internet and the proliferation of smart wireless devices have created an environment where IP devices are connected and, through apps, can collect and exchange data with one another, which is referred to as the “Internet of Things” (IoT), Collier said. Even cars can be IP-enabled devices. AT&T connected 1 million U.S. cars to the Internet in the third quarter of 2015 alone.

The IoT is made possible by expansion of the VoIP protocol and the Internet, connecting devices by Wi-Fi, securing and saving information electronically and text messaging. In this IoT world, executives can use wireless apps to monitor productivity or control the thermostat, lights or water at their office from afar. Businesses can take credit card payments on their cellphone while on the move, conduct region-based advertising using GPS location services and so much more.

“Many companies like AT&T are becoming a ‘remote control’ for peoples’ lives,” said Collier, who also is AT&T’s area manager responsible for regulatory relations and compliance in Nevada, Alaska, Oregon and Washington. AT&T, a telecommunications corporation, offers landline and wireless phone services and high-speed Internet to commercial entities.

Increasing numbers of telecommunications companies and their customers are moving to the cloud, which requires lots of bandwidth. The use of fiber optic cable (versus copper wire) and bandwidth, or the bit rate of available or consumed information capacity, “have exploded,” Peterson said.

“It’s a huge transformation that’s happening,” he added. “All content is going to be better serviced from the cloud.”

Whereas in 1997, the fastest available Internet speed in Nevada was 512 kilobits, today Cox offers businesses options up to 10 gigabits because the demand for and consumption of data have grown exponentially over the years. Companies need greater bandwidth to collect data through the Internet, to support an online product or service ordering process and to connect to a backup data center through which they use cloud-based applications.

“Higher and higher bandwidths are necessary as more of a business presence moves on to the Web,” Bolognini said.

The reliability and security of networks have improved greatly, even compared to a decade ago. Great amounts of sensitive data today can move across a network without many errors and with tighter security than ever.

“Highly secure and mobile connectivity not only powers the economy, but it also helps create a better, more sustainable world, from connected cars and homes to smarter, more resilient energy grids to tools that help cities manage traffic,” Collier said. “There are even applications that help to reduce pollution.”

Recent voice mail innovations have resulted in expanded connectivity between businesses and their patrons around the clock. In the past, callers could only leave a message for someone. Today, however, voice mail messages can be shared, converted to text messages and sent to a mobile device.

“All of these advances have helped Nevada businesses conduct business in one form or another to make work and life easier,” Collier said.

While some businesses are eliminating use of the traditional landline, there remains a need for them, said Bolognini. Some applications require them, such as alarm connections between a business and alarm company. Also, cellular service can be low quality and unreliable at times.

“I don’t see them going away for businesses,” he added.

Additionally, landlines are changing. Many phone companies are converting them from copper to fiber optic or Ethernet connections, thereby expanding bandwidth, Peterson said. Further, with available services from companies like Vonage, businesses can keep their landlines and still get access to various cloud-based telecommunications capabilities.

More and more businesses are adding Wi-Fi functionality in their brick-and-mortar locations, both for their employees and their customers to use.

“Wi-Fi has become such a critical piece of our tech today and it changes the perspective of how we approach work,” said Bolognini.

To maintain all of the elements of a company’s telecommunications components—apps, phone system and data network—an increasing amount of firms are outsourcing the management of it to experts, such as the technology providers, rather than tackling it all in-house, he said.

Service interruptions is one downside, particularly as telecommunications solutions become more and more complex. It’s a drawback that potentially could hamper a business significantly.

“Outages are going to happen,” Bolognini said. “No matter how much advanced technology is put in, with redundancy and backups, it’s still equipment. It’s still software. There are still going to be those glitches. We still have Mother Nature to deal with.”

Companies’ telecommunications systems must be secure to protect data, which is not always the case, and cybersecurity requirements keep evolving. Therefore, the industry continues to seek and offer the best protections it can.

“With companies mobilizing their workforce and moving data to the cloud, it means yesterday’s security strategies are no longer sufficient,” Collier explained.

Not all telecommunications offerings are high quality, Peterson said. Businesses must be cognizant of that and ensure the services they obtain deliver the quality level they desire and that best represents their organization.

Technology On the Way

“Telecommunications technology is changing fast and getting more exciting every day,” said Peterson.

Companies can expect widespread availability of increasingly faster Internet speeds and greater bandwidth—the latest is 1 gigabit, or a speed of 1,000 megabits per second. With it, about 25 songs can be downloaded in one second and a high-definition movie in one minute. AT&T’s version, GigaPower, is coming to Nevada soon and Cox’s, G1gablast, will be rolled out here in late 2016 or early 2017.

The next generation of cellular is 5G, and it’s expected to debut by 2020, according to the Next Generation Mobile Networks Alliance (NGMN), an association of mobile operators, vendors, manufacturers and research institutes. NGMN says that along with faster speeds, 5G networks will support the IoT and additional uses, such as person-to-person or person-to-group video communication with extremely high resolution.

When it comes to the IoT, Web real-time communication will be a game changer, Peterson said, as Web browsers will contain real-time voice, text and video communications capabilities, thereby eliminating the need for apps as an intermediary.