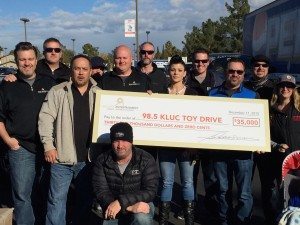 LAS VEGAS – PT’s Entertainment Group (PTEG), a division of Golden Entertainment, Inc. (NASDAQ:GDEN) and the largest traditional tavern operator in Nevada, donated $35,000 and dropped off hundreds of bikes and toys to 98.5 KLUC’s 17th annual Chet Buchanan & The Morning Zoo Toy Drive. The donation was a result of Golden Entertainment’s 9th annual golf tournament, in addition to contributions received from its guests.

For the third consecutive year, all 46 Southern Nevada locations of PT’s, Sean Patrick’s and Sierra Gold made it convenient for locals to stop by one of their neighborhood taverns and drop off gifts, including gift cards and monetary donations. Contributions benefit HELP of Southern Nevada, which in turn distributes toys to more than 50 local youth organizations.