You are here: Home / Departments / Speaking for Nevada / Congress Can Minimize Damage of President’s Deal with Iran 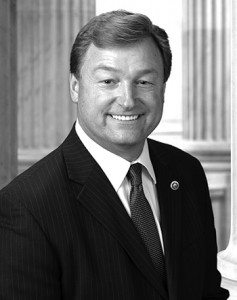 Passions about the President’s deal with Iran run high for Nevadans and those across our country. Since the deal was announced in July 2015, hundreds of Nevadans wrote me letters, called my offices, and spoke with me face-to-face, urging me and my colleagues to reject the deal. Like the majority of Nevadans, I oppose the President’s nuclear agreement with Iran and was disappointed that some of my colleagues blocked the Senate from taking a final vote on one of the most important issues I would have faced during my time in Congress.

As I’ve laid out before, the parameters of this agreement permit Iran to continue operating many of its centrifuges, allow its nuclear infrastructure to stay intact for future use, give Iran enrichment capabilities, and fail to offer a strict verification regime to ensure Iran’s compliance with the agreement. This deal unravels years of U.S. policy opposing these types of nuclear activities by Iran and lifts the sanctions that have effectively prevented Iran from developing a nuclear weapon. I could not have been more alarmed for our nation’s safety than when I saw the long list of concessions made by this Administration in exchange for a short-term deal with little to no enforcement mechanisms.

However, this comes as no surprise to me. Much of this President’s foreign policy has involved disengagement from geopolitical realities, undermining America’s influence on the international scene.  The President’s willingness to draw red lines and then step back once they have been breached signals to our adversaries the U.S. is willing to bark, but not bite.  This gives me great pause as the U.S. begins to implement the negotiated nuclear deal.  Under this Administration, I am not confident an Iranian violation of this agreement would result in much more than a slap on the wrist from the United Nations.

That is why it is clear to me that Congress’ work to prevent Iran from obtaining a nuclear weapon is more important than ever.  Such efforts must not only continue, but must intensify given the risks this deal poses to the security of our nation and our allies in the Middle East, like Israel.

Congress’ responsibility is two-fold—ensuring strong enforcement of remaining sanctions on non-nuclear activities and conducting vigorous oversight to ensure Iran’s compliance with the nuclear agreement.  As a member of the Senate Banking Committee, I am well-positioned to engage in these issues as the Committee exercises its jurisdictional authority over implementation of Iranian sanctions by the U.S. Treasury.

First, Congress must enhance and ensure strong enforcement of the sanctions that still remain in place to combat Iran’s most despicable activities. The Iranian government is an oppressive regime withholding basic liberties from its citizens and continues to be outspoken in its desire to see other nations – including the United States and Israel – “wiped off the map.”  We must continue aggressively targeting Iran’s state sponsorship of terrorism, severe human rights abuses and the suppressive and brutal activities of the Islamic Revolutionary Guard Corps. For the U.S., and especially for our ally Israel, this is a matter of necessity for our safety.

Secondly, I cannot stress enough the important oversight role the Senate Banking Committee plays to ensure Iran’s compliance with the nuclear agreement.  The Administration told us the Iran deal was not built on trust, but on verification.  Yet, its standard for verification lacks teeth. I cannot and will not trust this Administration to hold Iran fully accountable to its terms of the agreement.  Therefore, it is Congress’ obligation to demand transparency and relentlessly pursue any potential violations.

While the Administration’s deal with Iran dismantled decades of efforts by Congress to end Iran’s nuclear weapons program, opportunities to minimize this damage still exist.  Congress can still do its part to prevent Iran from obtaining a nuclear weapon through oversight, and Nevadans can be sure I will represent them in that fight—whether it is at the Senate Banking Committee or on the Senate floor. Protecting the American people is my number one priority in Congress.

Dean Heller is a Republican U.S. Senator representing Nevada in the Senate since 2011.