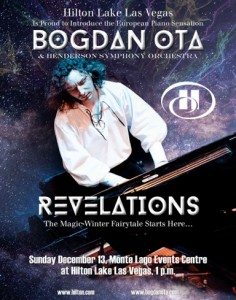 One of Europe’s most talented musicians, pianists and composers will be featured during a free concert at 1 p.m., Sunday, Dec. 13 at the events center at Lake Las Vegas. Bogdan Ota, a “Norway’s Got Talent” finalist, will be accompanied by the Henderson Symphony Orchestra, conducted by Geoff Neuman, as he performs his Revelations show that will take the audience through history, fairytales, film music and love stories.

Ota is a pioneer in the field of symphonic music, where he bridges traditional and modern compositions into a unique blend of contemporary music with classical flavors. His shows create a mix between symphonic music and other arts through video projections and ballet numbers to enhance the music’s message.

The free concert is sponsored as a holiday gift to the community from the Hilton Lake Las Vegas Resort & Spa. The events center is located at 8 Strada Di Villaggio in Henderson. For information, visit https://www.facebook.com/events/572658906208222/ or call 702-567-4737.

A leader in the contemporary music industry, Ota has enjoyed tremendous success in the last several years. He was a finalist in the 2011 “Norway’s Got Talent” competition, where he won a Sony Music/Day 1 Entertainment management contract and captured the hearts of the Norwegian public and jury. Subsequently director Rino Hemstadt Eliassen invited him to score “Sirenen,” shown in cinemas across Norway.

In May 2012, his life story became the subject of a book entitled, “Bogdan Ota and the Piano that Brings Heaven Closer.” Later that year, Ota released his first album, Day of Wrath, which reinvented Classical Crossover and New Age genres and was acclaimed by American professional music critics with 5 out of 5 star ratings; and he embarked on an international tour.

In November 2014, he released “Revelations,” his second CD. More than 200,000 digital and physical units have sold worldwide with more than 10 million views on YouTube.

Ota graduated from the George Enescu Arts University in Iași, Romania in 2003. He is currently based in Las Vegas, and performs at the Hilton Lake Las Vegas. For more information, visit www.BogdanOta.com, www.facebook.com/BogdanOtaOfficial, or http://www.youtube.com/user/BogdanOta.

“Bogdan Ota is a composer in rarified air. He moves with a musical deftness and understanding of compositional structure that is not often found. Soaring and emotive themes lay down beside quiet passages as if all were of the same water and molded together. Day of Wrath makes one thing very clear: Any discussion about a natural successor to John Williams is incomplete without considering the name of Bogdan Ota”
— Wildy Haskell, editor for Wildy’s World and reviewer for Indie-Music.com