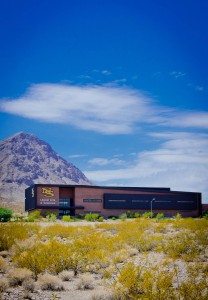 HENDERSON – Nevada State College (NSC) invites hiking enthusiasts to join in the first official climb to the top of Mount Scorpion since federal officials approved its name earlier this year.

The community hike starts at 9 a.m. on Saturday, Oct. 24, at the NSC campus at 1125 Nevada State Drive in
Henderson. Ample parking is available.

“This is a thrill for us,” NSC President Bart Patterson said. “The federal naming of Mount. Scorpion strengthens our sense of mission and school pride.”

The tradition of hiking Mount Scorpion, a scenic desert-scape behind campus named after the school’s mascot, began in October 2012 with 15 students. It has since grown to include dozens more students, faculty, staff and hiking enthusiasts. Students organize two hikes a year.

The effort to have the mountain range officially named Mount Scorpion began in 2012 with a presentation to the Board of Regents by then newly appointed President Patterson, who is an avid hiker.

In 2014, the college’s Office of Community Engagement and Diversity Initiatives took on the naming project, gaining support from all the necessary local, state and federal agencies to win approval for officially dubbing the summit Mount. Scorpion.

Nevada State College, a four-year public institution, is a member of the Nevada System of Higher Education. NSC places a special emphasis on the advancement of a diverse and largely underserved student population. Located on a developing 500-acre campus in the foothills of Henderson, Nevada, the college was established in 2002 as a new tier in the state system between the research universities and the two-year colleges. In this role, the college emphasizes high-quality instruction, exemplary service, engaging learning experiences, and innovation as a means to more efficient, effective outcomes in all corners of the campus. Since 2002, Nevada State College has grown to offer more than 45 majors and minors, has received independent accreditation and has expanded its physical campus. Committed to fostering a personal learning environment, students are taught by faculty who serve as mentors and guides in classrooms with an average class size of only 26 students. Nevada State College serves approximately 3,500 students and has over 2,600 alumni, each representing a broad array of cultural and economic backgrounds. For more information, visit http://nsc.edu.