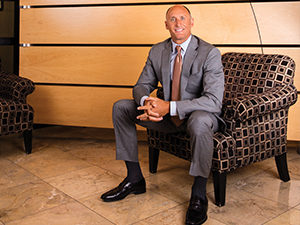 The office space component of Nevada’s commercial real estate market faces a long recovery following the recession. Vacancy and unemployment rates were high, inventory was excessive and landlords struggled to effect leases. In addition, after the recession new construction activity and investor property acquisitions had ceased. Typically, the sector tends to be the last to bounce back when compared to its retail, industrial and residential counterparts. Today, the market fundamentals are improved over their 2009 levels overall, but the strength of the office space segment differs dramatically between the Silver State’s Southern and Northern regions.

Office space in the Las Vegas Valley continues a slow, protracted but steady rebound, with bright spots signifying movement in a positive direction.

The market experienced positive net absorption for five consecutive quarters due to returning demand, momentum in the sector and a scant amount of new construction.

Catering to small and medium-sized companies, office is seeing plenty of demand, but oversupply is keeping the vacancy rate high. As of the end of quarter two, the rate was 23.1 percent, lower than the most recent peak at 25.5 percent in 2013, according to Applied Analysis’ “Second Quarter 2015 Office Market Performance Measures” report. Las Vegas had the lowest vacancy rate (20.5 percent), and North Las Vegas had the highest (25.2 percent). In comparison, a healthy number for the region is between 10 and 13 percent, and the prerecession low was 7.9 percent in 2005.

“We’ve never seen a market like this. It’s become more the norm to hover around 20 percent vacancy, and that’s been going on for three or more years,” said Barton Hyde, a principal specializing in office and medical office with Avison Young.

With Class A’s vacancy rate at 18.8 percent and Class C’s at 27.8 percent, per Applied Analysis data, “it’s almost two markets in one,” said Randy Broadhead, senior vice president specializing in office leasing, CBRE Las Vegas. Class A and B properties along a freeway and surrounded by services have done well over the past two years with demand for them increasing whereas the inner city spaces, which are mostly Class C, in the older neighborhoods haven’t done as well.

“There is probably going to be a trickle-down effect as those buildings along the beltway get filled in,” Broadhead added. “First, the outer circle ring is starting to do better and fill in. Eventually, it will come back to the inner city property and help it out.”

A number of the Class C older buildings may not meet tenants’ technological needs, but because landlords have to spend the capital and charge more rent (the lease rate for some Class C space is as low as $1 a square foot) or ask tenants to pay for improvements or retrofits, generally they’re not getting done.

In past years, landlords offered a tremendous amount of free rent, as much as seven to eight months on a five-year lease, but that is tightening as are tenant improvement packages, Hyde said. Tenants likely could get one month of free rent per year today, but not on Class A space.

Longer lease terms are common now with Class A space, with five years being the minimum and some as long as seven to 10 years, Hyde added.

“We’re already past the peak in terms of how much office we’re using,” Mixer said. “It really points out that factors in our market are pretty solid, and we’re on this path of recovery.”

As for office property sales, prices are rising, Hyde said, and acquisitions are being done with more private than institutional (i.e pension funds and insurance companies) money than in the recent past. The most notable transaction in the second quarter was Roseman University of Health Sciences’ acquisition of the 143,000-square-foot, former Nevada Cancer Institute building for its medical school.

“Investors also are being opportunistic in acquiring well-positioned assets due to the underperforming market in recent years,” Gordon said.

Due to high vacancy rates, lack of available land and low rental rates, developers in general aren’t building much new office space. Three projects, however, are in development in Las Vegas, including the 129,000-square-foot Federal Justice Tower in downtown Las Vegas. Another is the 68,000-square-foot second phase of Tivoli Village at Queensridge and the last is the 7,900-square-foot third phase of Pecos Springs Business Park.

Some projects were completed in the second quarter, taking inventory to 53 million square feet, according to Applied Analysis. The largest was the 35,700-square-foot third phase of The Park at Spanish Ridge.

“Office space is looking to be more flexible to accommodate different-sized groups or teams on different days for different projects,” Mixer said.

The near-term future for the sector should hold more of the same—steady, moderate growth, the experts said. Employment rates should continue upward, driving vacancy rates down overall. Hyde said he expects a flood of new space being planned for the market, which then will get built when the timing is right, in about 12 to 18 months, he estimated. In terms of Class A space, rates should continue climbing and vacancies should keep declining. Class B space rents should rise, too, but more gradually.

“The future looks bright,” Broadhead said. “[The office space segment has] been improving, and it’s going to continue to improve.”

The office space market in the Reno-Sparks area is vibrant, with abundant activity having taken place over the past 12 to 14 months, said Dominic Brunetti, principal and office specialist, Dickson Commercial Group Inc., a Reno-based commercial real estate company.

“We’re starting to see a tightening of the market,” he added. “It’s the healthiest it’s been in a decade.”

The vacancy rate at the end of May was 15.15 percent on average for the area. This compares to its peak of 24 to 25 percent in early 2010. The sub-sectors with the lowest vacancy rates were Meadowood at 10.05 percent and downtown Reno at 11.51 percent. The Central/Airport locale had the highest rate at 20.3 percent.

“There has been a lot of demand for newer Class A product, especially in key business areas,” Brunetti said.

Office leasing is such today that one to three tenants may compete for one space, a phenomenon that didn’t occur two years ago. Current lease rates on a full-service gross basis are $1.82 for Class A, $1.60 for class B and $1.38 for Class C space. In the hotspot of downtown Reno, rates for Class A space are, at a minimum, $2 per square foot.

A notable lease during the second quarter consisted of a 29,776-square-foot space in the Central/Airport submarket, according to VOIT Real Estate Services’ “Second Quarter 2015 Reno Office” report.

Northern Nevada’s office market today reflects more diversity among lessees than in its heyday of 2004-2005, Brunetti said. Whereas in the past, most absorption was due to companies related to residential home building, now professional services and technology firms dominate.

While landlords today typically aren’t giving away months of free rent like they did in years past, they are offering creative deals to attract and maintain tenants, particularly those from out of the area. They may offer an upfront concession, such as some tenant improvements, and then extra space for free, based on the tenant’s growth projections. For example, if a tenant only needs 8,000 square feet, the landlord may offer an extra 2,000 square feet for free until year two of the lease, at which time the tenant should need all 10,000 square feet.

“It’s becoming more of a landlord’s market because of what the vacancy rates have done over the last two years,” Brunetti said. “They have a little more bargaining power or leverage now.”

A trend has emerged of open workspaces versus private offices, with lounge areas and commercial kitchens, to foster collaboration among employees, Brunetti said.

A minimal amount of new office space construction is occurring because, with current lease rates along with construction and land costs, it isn’t economically feasible for developers to build, Brunetti said. On a positive note, financing for commercial real estate development is easing, and more loans with favorable financial terms are available.

Some new, Class A buildings are going up in the Meadowood corridor. Additionally, according to VOIT’s report, more than 550,000 square feet of office development has been proposed.

Based on the number of prospective tenants looking at space, expansions happening among resident companies and the economy in general, the remainder of 2015 and the start of 2016 should be healthy, Brunetti said, barring any national crisis.