You are here: Home / Press Release Wire / Bank of Nevada Collecting School Supplies for Hundreds of Students in Need 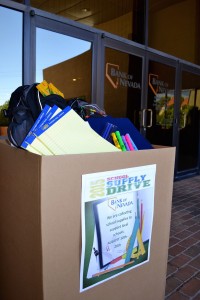 The public is invited to help provide school supplies for hundreds of Southern Nevada students whose parents may have difficulty providing the basic supplies their child will need.

The 2015 Bank of Nevada School Supply Drive, happening August 10, 2015 through August 28, 2015, is a chance for Bank of Nevada employees, customers as well as the general public to provide the tools and supplies many students will need for the new school year.

“We are big supporters of education and helping students understand the importance of doing well in school,” said John Guedry, Bank of Nevada Chief Executive Officer. “Unfortunately, a student who starts school without the proper tools is already at a disadvantage. We want to prevent that from happening.”

The public can drop off new school supplies at any one of the 11 Bank of Nevada branches in Southern Nevada. The supplies will be donated equally to three Clark County School District schools which are considered Title One Schools, meaning a significant number of students enrolled, are considered economically disadvantaged. The chosen schools are:

Donations can be dropped off at any of the following Bank of Nevada Branches during normal business hours, Monday through Friday, 9 a.m. to 5 p.m.