You are here: Home / Press Release Wire / 25th Anniversary Superhero Race and Event for Kids with Cancer: Sign up for race, walk, fun Sept. 12 at Exploration Park at Mountain’s Edge 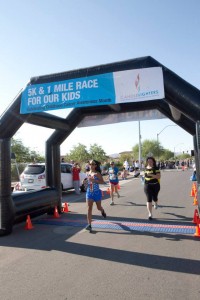 A chance meeting between a local baseball executive and pediatric cancer patient 25 years ago set in motion the biggest local fundraiser for children with cancer and their families and the Candlelighters Childhood Cancer Foundation of Nevada. Called the 25th Anniversary Superhero 5K with Chet Buchanan this year to commemorate the quarter-century milestone, the race, one-mile walk and companion activities will be Saturday, Sept. 12 at Exploration Park at the Mountain’s Edge Master Planned Community, 9600 South Buffalo Drive, just south of Blue Diamond Road.

The event has grown from 75 people raising $1,000 in 1990 to more than 2,000 people raising more than $170,000. It also now includes costumes; kids activities with an inflatable obstacle course, bounce house and games; bone marrow drive hosted by Be The Match; 5K awards ceremony; food and refreshments; raffle prizes; 25th anniversary commemoration; and more.

The race has remained dear to founder Mark Grenier, who has remained its chairman and biggest cheerleader and recruiter. Now an executive with CBS Radio, he invites participation by forming a team, running the 5K or strolling during the one-mile walk, making a costume, or coming out to support family, friends and those making a difference in lives of children and families living with cancer.

The seed for the race was planted in 1984 when Grenier’s father passed away at 51 from prostate cancer, and he and his siblings agreed to do something for cancer to commemorate their dad. A few years later, he met 9-year-old Jared, who was recovering from brain surgery caused by cancer, when Grenier worked for the Las Vegas Stars (now 51s) and brought players and the team mascot to Jared’s baseball game. They remained close until Jared passed away a year later. Grenier had been running marathons and subsequently organized the benefit run to support Candlelighters which had helped Jared and his family.

As Jared was Grenier’s inspiration, Dace Ash Davis and Keenan Bly are this year’s Superhero Ambassadors. Dace, 5 years old, has chemotherapy every day and continues to impress family and friends with his courage and strength as he battles Leukemia. Keenan, was almost 8 years old when he passed away from rare form of liver cancer in 2007. He still inspires those who knew him, and is the race’s Super Angel Ambassador.

Event day registration begins at 6:30 a.m.; the race and walk start at 8:15 a.m.; and festivities continue until noon. For advance registration and related dates, information and ways to get involved, visit www.candlelightersnv.org or call (702) 737-1919. Superhero capes are being sold for $5 while supplies last at the Candlelighters office, 8990 Spanish Ridge Ave., Ste. 100.

The 25th Anniversary Superhero 5K with Chet Buchanan raises critically needed funds for the nonprofit Candlelighters organization, which provides financial assistance for medical and prescription co-pays, mortgage/rent, utilities, local transportation and travel for treatment, scholarships and funerals; counseling; and other programs to lift the spirits of patients and family members.