You are here: Home / Features / Building Nevada / On the Rise: Commercial Building Rebounds 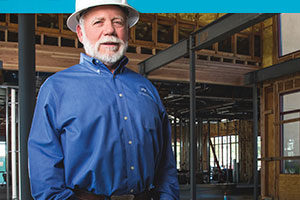 For the first time since 2007, when the recession decimated their industry, commercial builders in Nevada believe the industry is finally snapping back. “The recovery is slower than anybody wanted it to be, but the good news is that it is recovering,” says Ray Sedey, executive vice president of McCarthy Building Companies in Las Vegas. “Construction is recovering, but we’re coming off what was really a low.”

Kevin Burke, president and CEO of Burke Construction added, “We’ve been on a growth spurt for the last couple of years. Our staffing in Las Vegas is up by 10 percent.”

The reality of the recovery is obvious to anybody who drives around the Silver State. “For many years following the recession, you would drive down freeways and see stalled cranes, empty lots and abandoned projects. Now, the recovery of the commercial building industry is evident in the activity taking place,” says Margi Grein, executive director of the Nevada State Contractors Board. “There’s a renewed buzz across the state. Media coverage is helping to highlight the growth in the commercial market and bring a sense of excitement to the public when speaking of new businesses, entertainment or services that will be offered because of these developments.”

The eclectic array of construction popping up includes a laundry list of mega projects that promise significant economic impact to the state. Downtown Summerlin opened its long-awaited destination for fashion, dining and entertainment late last year by adding 1.6 million square feet of mixed-use development consisting of stores, restaurants and class A office space. Resorts World Las Vegas, a Chinese-themed resort destined to open its doors in 2018 recently broke ground. The resort is expected to include a replica of the Great Wall of China, a panda exhibit, an indoor water park and an aquarium. The project will employ 30,000 construction workers and provide 13,000 permanent jobs when completed. Work also continues on the Las Vegas Arena, a 20,000-seat multi-use venue which will be finished next year. The arena will bring 2,500 construction jobs to the area and have an economic impact of around $300 million a year when it is operational.

Tucked in the desert east of Reno at Tahoe-Reno Industrial Center (TRI), the much heralded Tesla battery factory outshines all other mega projects in the state. It’s hard not to be impressed by this giga facility that will be one of the largest factories in the world with 10 million square feet sprawling over more than 500 acres. When fully operational, this gigantic complex will employ about 6,500 workers permanently, and will have provided thousands of construction jobs while being built.

As the Tesla steel rises in the desert, however, concerns linger about the deal that was cut to lure the company to Nevada. Without over-analyzing the specifics, the state agreed to provide Tesla with $1.3 billion in incentives. In general, however, Nevadans are basking in the “Tesla Effect” which is spilling out into many areas of the economy and society. In Northern Nevada the buzz is all about this giant and how the expectations of it will play out over the years.

In addition to the mega projects, commercial builders say they are ramping up with other work that reflects the measured growth in the economy. “SR Construction has long been a leader in healthcare construction working in a number of hospitals throughout the valley and we have been selected to be on the team to design and build the new Henderson Hospital located at Union Village,” says Scott Loughridge, owner, CEO and president of SR Construction.  “Additionally, we are building multiple skilled nursing facilities and ambulatory surgery centers here in Las Vegas. We are also partnered on unique hospitality projects such as the Beer Garden for MGM Resorts International at the new Arena Park, with Las Vegas Sands Corporation DB Brassiere at the Venetian, and the most recent Grill Concepts expansion (Public School 702) at Downtown Summerlin.”

Sedey also lists a number of projects with which his company is involved. “We focus on a diverse work portfolio. It’s across the board,” he says. Areas of participation include gaming and hospitality, education, waste water management, healthcare and the airport. As he looks to the immediate future he expects opportunities in the school district, as a result of the recent legislative session, along with expansion of the convention center and spillover work from Tesla.

Activity at Burke Construction is also brisk as work proceeds on the St. Anthony of Padua Parish Hall, the new $5 million home of parishioners of St. Anthony of Padua. Encompassing 16,274 square feet, the hall will provide seating for around 1,000 people attending mass along with meeting and reception areas. Burke is also general contractor on the Summerlin Aquatic Center which will feature a state-of-the-art lap pool along with a therapy pool for classes and physical therapy when it’s open to users in December. As the employment picture brightens, healthcare facilities become a more important piece of the construction pie for companies like Burke.

With the momentum in commercial construction moving in the right direction, contractors are looking at key infrastructure improvements as central to the continued growth. “We’re seeing spec industrial which is a good sign,” said Burke. “Markets are in the warm category.”

Although a myriad of transportation projects exist around the state, four stand out as being particularly significant: Project Neon and Interstate 11 in the south and USA Parkway and Veterans Parkway in the north. Extending 3.7 miles along I-15, Project Neon will improve traffic and safety by separating mainstream freeway travel from local traffic passing through Las Vegas. Although still several years out, connecting Phoenix to Las Vegas from the Mexican border and continuing on to Canada, I-11 will facilitate future growth by making travel to and from southern Nevada much quicker and easier. The extension of USA Parkway will connect I-80 in Storey County to U.S. 50 in Lyon County and the completion of Veterans Parkway will speed up travel between Sparks and South Reno along a north-south route east of I-580.

To be in the game in a competitive way, commercial builders have to be fleet of foot to acknowledge and utilize the changes that have swept through the industry in recent years. “Some of the things that have changed is the use of technology and how the industry is embracing it in virtual plans. You can build a building virtually before you do it for real. It’s definitely more coordinated now on the pre-shovel activity. We can build faster and on schedule,” Sedey says. Although safety has always been a priority, Sedey says that overall the industry is even more focused on it now by increasing engineering that will help eliminate hazards.

In addition to using technology more, builders are also concentrating on greater efficiencies in how they operate in general. “If there was a silver lining with the recession, it was that we had to become extremely efficient with fewer resources. We had to change the way we did business to be able to compete for the limited number of jobs that were out there. Now that the economy has picked up a little, we are trying to stay lean, fast and efficient to be as productive as we can,” says Loughridge.

Commercial building in Nevada has also had to adapt to a shortage of skilled labor as a result of the recession, according to Grein. “Commercial building has changed in that there isn’t the abundance of skilled labor there used to be prior to the economic downturn. Despite the shortage Nevada’s construction industry faced after numerous workers relocated following the recession, we are starting to see promising numbers in Nevada’s job growth,” she says.

Although builders are experiencing increased demands for their work, some of those involved in the projects face challenges in nailing down adequate financing. “While we’re seeing improvements, the economy remains a challenging factor in the construction industry,” Grein says. “The demand for new projects is progressing, but the opportunities are still limited. As the economic constraints continue to get better, we expect to see an increase in sustainable projects that are better equipped to meet the lenders’ requirements for financing those developments. In the meantime, however, commercial builders are likely to find that banks and lending institutions are still proceeding cautiously when asked to finance large construction projects.”

Another challenge is finding enough skilled workers to do the job. “Finding skilled workers is becoming more of a problem as many of our tradesmen left during the recession and have not returned. Also, our workforce is aging and recruiting younger workers is becoming difficult. Recruiting young people with talent and a good work ethic is a top priority,” Loughridge says.

Sedey has met the labor shortage head-on as he works with unions and educators to build a local supply.

Despite these challenges, however, commercial builders in Nevada are very resilient as they look forward to an optimistic future.

“We continue to be bullish,” said Burke, a sentiment that many builders echo on this side of the recession.

Burke Construction continues to work diligently to bring economic development to the area. “I travel quite a bit,” explains Burke. “You get a better perspective of what’s going on across the country. There are some areas that are razor hot and others that are worse off.”

Although the recovery may be cautious, at the very least it promises an end to the lingering recession that has been so damaging to Nevada. “With every project that breaks ground, Nevada’s construction industry is making strides to employ more people, drive the economy upward and renew the spirit that was tempered by the downturn. It is ultimately the public that reaps the greatest reward from commercial development by seeing their cities and communities welcome diverse businesses offering unique opportunities for all to enjoy,” Grein says.