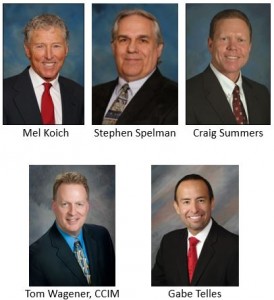 Gatski Commercial has more than doubled in size over the past year, recruiting some of the state’s top brokers in their respective fields. Koich, Spelman, and Summers bring over 75-years of industrial expertise to Gatski. That tenure coupled with Gatski’s other recent investment/industrial acquisitions of Gabe Telles (CBRE/Colliers; 18-years), and Tom Wagener (Trammell Crow; 30-years), now dramatically elevates Gatski Commercial’s industrial advisory services within Nevada.

Gatski Commercial’s Industrial Division is now one of the most experienced and prolific groups in the state, with an institutional and private client base that spans not only years, but decades.

“It’s a credit to the “client-first” reputation that Frank Gatski has established over the past 20-years that has enabled us to attract such great talent” – Gabe Telles, Senior Vice President, Managing Director.