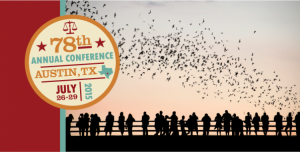 The National Council of Juvenile and Family Court Judges (NCJFCJ) 78th Annual Conference, Rethink, Reimagine and Redefine Justice for Children and Families will be held on July 26-29 at the new JW Marriott in Austin, Tex, the Live Music Capital of the World. This dynamic conference will host more than 400 judges and related professionals in juvenile and family law from across the country in an inspiring, informative consortium covering topics like domestic child sex trafficking, child abuse and neglect, trauma, custody and visitation, judicial leadership, domestic violence, juvenile justice and more.

A Dynamic Lineup of Keynote Speakers

An exciting group of speakers will be in attendance including: Deconstructing the Myths of Adolescence by Abigail Baird, PhD; Implicit Bias and the Myth of Equal Justice by Jeffrey Rachlinkski, JD, PhD; Family Law in the U.S. Supreme Court: Reading Between the Lines by Joseph C. Hoffmann, JD; Do It Yourself Brain (The Neurobiology of Happiness) by Roger Hall, PhD; Embracing Smart on Juvenile Justice: Children Can’t Wait by Robert L. Listenbee, JD; and In re Gault – 51 Years Later by the Honorable Peter Cahill and Lisa Pferdeort, JD. These renowned faculty speakers hail from all over the country.

More than 50 breakout sessions will feature relevant trends, insights and important discussions in areas of juvenile law, and family violence and domestic relations including the topics of:

Domestic Child Sex Trafficking – with the recent JVTA (Justice for Victims of Trafficking Act) passed into law, the NCJFCJ continues its education and trainings with case studies and innovative approaches.

Same Sex Marriage and the Transgender Community – breakouts will focus on tools to approach the post-DOMA (Defense of Marriage Act), children and property in non-recognizing states and adjudication, dissolution and custody disputes involving transgender litigants.

Racial Disparity and Disproportionality – conversations on race class and gender in the courts, and the role of the child welfare system will occur in this highly important issue.

Military Families – the NCJFCJ will lead sessions on judicial leadership for military families in family support cases, custody and visitation.

Trauma-Informed Courts – focusing on insights from trauma audits, addressing domestic violence and trauma in the family drug court and the “perfect victim” myth. The NCJFCJ continues its commitment to victim trauma and trauma-informed courts.

On the evening of Tuesday, July 28, the NCJFCJ will host the first-ever Justice Innovation Celebration and Gala featuring Texas community leaders. Austin mayor, Steve Adler and first lady, Diane Land, will kick off the event as NCJFCJ honorary celebration chairs. Austin Judge Darlene Byrne of Travis County 126th Judicial District Court will be sworn in as the NCJFCJ 2015-2016 president. Members of the Austin and the Texas legal community will be in attendance. The Celebration will include fundraising festivities for the NCJFCJ.

The NCJFCJ will announce the honorees of the inaugural NCJFCJ Justice Innovation Awards recognizing the national Innovator of the Year and the State of Texas Impact of the Year recipients: the Honorable Judge Lori A. Dumas, Philadelphia family court judge and presiding judge of the WRAP Court: Working to Restore Adolescents’ Power, and The Military Child Education Coalition (MCEC), a nonprofit, worldwide organization focused on ensuring quality educational opportunities for all military children affected by mobility, family separation and transition.