You are here: Home / Features / Building Nevada / On the Job: Subcontractors Critical to Construction Industry 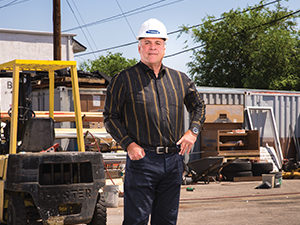 Subcontractors are the building blocks of residential and commercial construction. They’re the ones doing the foundation, framing, drywall, glass, plumbing. Without subcontractors, projects go nowhere.

The subcontractor market was hit hard during the economic downturn when Nevada’s construction market turned on a dime from fastest, biggest in the nation to the hardest hit with the highest unemployment numbers. To survive the years between 2008 and 2012, many subcontractors headed out-of-state to find work, or closed up shop.

“I would say the majority probably closed their doors rather than left the state,” said Rebecca Holmstrom, business development manager, Nevada Subcontractors’ Association (NSA). “The people who left the state were the laborers, not the contractors.”

Some contractors downsized, finding a way to do more with less. Some of them are still trying to bring up staffing levels.

“[Contractors] are working hard to staff up,” said Scott Donnelly, Cooper Roofing and Solar, and president, NSA. “They’re facing the same issues the rest of us are: through the downturn we all tightened our belts and now things have taken off rapidly; everybody’s scrambling to keep up with growth.”

As the Nevada economy rebuilds, subcontractors find their way back to business. This means that for now there are enough subcontractors still standing to cover the work available. What there isn’t enough of is labor.

That’s the biggest concern, Donnelly said, because there’s a big demand for skilled labor in Arizona, Utah and California, too. “A lot of folks who left aren’t going to come back here – they’re too busy working where they’re at. I don’t think anybody thought the recession would last as long as it did, so they’re a little concerned about taking a chance on coming back.”

“Right now it’s pretty good, there’s plenty of coverage for us,” said Semenko, meaning coverage by subcontractors still operating in Northern Nevada, adding that Q&D prefers to work with local subcontractors. “We’d rather have the local guys getting the work than somebody from out of town.”

Those local guys are finding work, just not, perhaps, as some optimistic reports imply.

“Right now there’s mostly public works projects. We’re seeing a slight uptick in the private market, but it’s not boiling over like everybody seems to be talking about,” said Semenko. This might mean that many are anxious for recovery to be farther along than it is. Tesla is definitely driving business to Northern Nevada, Semenko said, and there’s the proposed 3 million-square-foot Switch Data Center at the Tahoe Reno Industrial Center, but while businesses are headed our way, they’re not coming all at once.

Typically, the general contractor obtains the building permit, including permits for subcontractor specialties like framing. Specialty subcontractors such as electrical and plumbing will pull another permit off the construction permit.

In Southern Nevada, the permit process is time consuming. There are five building departments – Las Vegas, North Las Vegas, Boulder City, Henderson and Clark County – and they don’t all operate the same way. Sometimes the permitting process takes longer than the actual construction.

In Northern Nevada Semenko said the permitting process is on par with what it once was, and contractors are hoping it will improve.

Tradewinds Construction serves as both general and subcontractor. The subcontractor divisions include design-build tenant improvements, commercial wood framing, metal stud framing and drywall, paint and acoustical ceilings and a mechanical-plumbing division closed during the economic downturn. Even the subcontractor divisions weren’t enough to ensure work through the recession. Tradewinds worked for Nevada general contractors out of state to supplement the business.

Vilkin added that not being able to perform on schedule could be the difference between a successful job that makes a profit and one that doesn’t – the margins are very tight in today’s market. “So the subcontractor has to have the work opportunity laid out in front of him to go in, get it done and get out.”

It comes down to proper planning on the part of subcontractors and general contractors, and having experienced professionals on the job, which is tougher in a lean economy where jobs are tight and margins tighter. There’s no room for mistakes because delays can eat up profits. If everything goes according to plan, it’s like a machine, Vilkin said, one where the right materials are fed in at the right time in order to produce a finished product at the other end of the process, whether that’s 10 weeks later for an interior job or 20 months later for a big complex commercial project.

One significant change for subcontractors in 2015 is the passage of AB125 in January. NSA, which works to promote, enhance and protect subcontractors’ rights, worked for 15 years to change Nevada Revised Statutes Chapter 40, the section of law dealing with construction defects. When originally passed into law, the language of the law was so vague that when construction defect litigation began, every subcontractor that had set foot on a jobsite was dragged into a case, no matter how unrelated their work was to whatever caused the defect. Passage of AB125 restores the intent of Chapter 40, “To facilitate a quick and efficient resolution to construction defect claims whenever possible.”

“By my analysis, there’s been just enough work in the marketplace in 2012, 2013 and 2014 for most of the contractors who survived to basically break even,” said Vilkin. “The market is still very, very competitive, the margins have been very, very tight, there’s lots of competition for anything getting built and basically the marketplace has an equilibrium where the contractors who were able to stick it out were doing just enough business to keep going.”

The lack of skilled tradesmen is an ongoing concern for construction. “We need to get kids involved in the trades again,” said Semenko. “College isn’t for everybody, and the kids who don’t want to go to college, we need to educate them and let them know there’s some pretty decent money to be made in the construction industry.”

The industry has had to reinvent itself, and individuals working within it often cover more than one job, which translates into the field, where there’s a need for the most well-trained, most efficient, productive and professional tradespeople available.

Part of the revolution is technology. In the last five years, construction has moved from purely hammers and nails to include tech solutions. Where a foreman once carried a set of blueprints, he or she now uses a tablet to get real-time updates from the architect, take pictures and get 3-D images. For instance, the Southwest Regional Council of Carpenters uses a virtual welding system that allows their workers to be trained in three weeks as opposed to having to complete long apprenticeships.

“It’s a different animal to be writing checks to keep the company going than if the company is self-sustaining,” Vilkin said. “Not many subcontractors would describe the past few years as prosperous, maybe a few who found the right niche at the right time.”

“In general,” he said, “most of my colleagues would describe it pretty similarly: the tide rose, but not too far. I see finally a rising tide going to cover the commercial marketplace in Las Vegas.”

Projects are breaking ground, some are going on The Strip which gives union companies something to sink their teeth into. There’s ongoing significant rennovation for union subcontractors to work with, and off The Strip there’s finally starting to be a steady stream of new buildings going up.

“Since November we’ve had a consistent backlog of half a dozen jobs or so that we’re working at the same time,” said Vilkin. He added that Tradewinds is “continuing to have more opportunities to look at coming in the door after we went five to six years with virtually no work opportunities here in Southern Nevada.”

Tradewinds has experienced a 50 percent increase in revenue in the first quarter of 2015. In addtion, the company efforts in business development look likely to continue for the first time since 2008. Vilkin’s biggest concern for the industry as it begins to rebuild is an oppressive tax environment in Nevada. He said that if the Legislature passes new taxes that change Nevada’s business-friendly environment, it “could choke off the flow of companies expanding in or relocating to Nevada.”

“I’d like to see the Legislature make decisions that are best for everybody involved,” said Semenko.
“I’d love to see the state continue to improve,” said Donnelly. “We were hit the hardest in the U.S., so it’s nice to see it come back. We hope that will continue.”