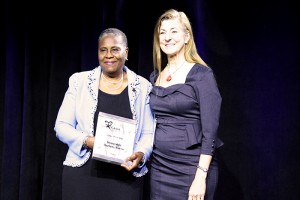 The awards honor and celebrate dedicated volunteers, board members, staff, judges and programs who help abused and neglected children every day, all around the country.

Judge Byrne is a child advocacy leader at a local, state and national level. Whether it is through her unfailing compassion and respect for those children and families appearing before her in court or through her writings and public appearances, she is committed to improving the child welfare system.

“Judge Byrne is a true believer in the CASA model,” said Laura D. Wolf, executive director of CASA Travis County, Inc. “She often writes editorials and meets with community groups to increase understanding of what children and families need. By consistently leading from the bench to benefit children, she is well-deserving of this recognition.”

For more than eight years, Judge Byrne has presided over courtrooms dealing with families and dependency. She has established herself in both the professional legal community and among Texas CASA volunteers as a leader and role model for other family-dependency judges statewide.

Judge Byrne is the president-elect for the National Council for Juvenile and Family Court Judges (NCJFCJ). Under her leadership, the Travis County child protection courts were named a model court in 2009, one employing the NCJFCJ-recommended “one family, one judge” model. Since then, the model has been used to improve the system for children and families by examining data and applying common-sense solutions for children.

“Judge Byrne exemplifies a true leader in the judiciary,” said Judge Peggy Walker, NCJFCJ president. “We congratulate her for her achievements not only in Travis County, but nationally. We thank CASA for the recognition of her extraordinary work helping children and families seeking justice.”