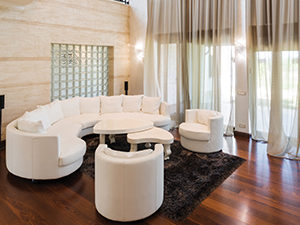 Some say luxury homes are those priced at $650,000 and above while others say it’s those at $1 million and higher. Coldwell Banker considers the luxury home price point to be $750,000 and up.

Luxury, though, isn’t based on price, said Dena Hospodka, managing broker of Coldwell Banker Select Real Estate’s Mt. Rose/Galena luxury boutique office in Reno and a member of the 3,120 member Reno/Sparks Association of Realtors (RSAR). Such a home must be up to date and incorporate fine finishes and high-end appliances and amenities. A $3 million dollar home that’s obsolete, for example, wouldn’t qualify as luxury. Further, the desired look, style and features for a high-end home can differ among individuals.

“I think you can have a luxury home in each of the price segments, including those homes under $1 million. It really is about what a buyer is looking for and what they consider luxury,” said Tracy Saunders, the president of the Incline Village Board of Realtors (IVBOR) and a real estate agent at Chase International in Incline Village.

In the North Lake Tahoe region, some of what buyers want are views, open floor plans, en-suite bedrooms (each with a bath), mud and wine rooms, three-car garages and, for the aging population, main-level master bedrooms and elevators.

“I believe that these home buyers are very discretionary. They’ve done their homework. They’re looking for an extremely well-built house. They won’t settle for faux anything,” said Teri Scharosch, the executive director of the Builders Association of Northern Nevada (BANN), which advocates on behalf of its 500 building industry member companies.

With interest rates so low, now is an ideal time to purchase a Nevada luxury home, experts said, and in certain cases, good deals can be made.

This North Lake Tahoe locale offers some of the most luxurious homes in the Silver State. They’re scattered throughout the community in new, remodel and resale forms, Saunders said.

Entirely new, ground-up construction is taking place but it is minimal. This is because few land parcels are available and only 10 annual permits for this use are allocated for the portion of Lake Tahoe that falls within Washoe County.

Also, because of land constraints, subdivisions of new luxury homes are rare. The exception is Incline Creek Estates, which is situated on the former Sierra Nevada College campus property. In this newer gated community of 57, two-story, single-family homes above $1 million, building and sales continue.

Remodels of existing homes into luxury versions are common. This is where a small portion of the original home, the foundation for instance, is maintained so the new structure qualifies as a remodel, thereby eliminating the need for and cost of an allocated permit.

Most of the area’s luxury homes are resale. The median price of resale homes on the market over $1 million is about $2.2 million, according to IVBOR data. Prices, in general, are climbing back to pre-recession numbers, Saunders said. Four of the five homes sold since March 2014 on Lakeshore Boulevard, the road that snakes along the lake, went for more than $3 million. The highest priced resale home last year sold for $10.4 million.

In the first quarter of 2015, Incline Village/Crystal Bay’s luxury market has been slightly depressed. Nine $1 million-plus homes sold then, compared to 19 in the same period in 2014.

Regardless, demand for these residences is on the rise, Saunders said, particularly with new companies moving into Nevada.

In the rest of Northern Nevada, luxury homes prices are trending upward but aren’t at pre-recession levels yet, and demand remains steady. Inventory, however, remains low, Hospodka said.

Although BANN doesn’t track the number of new luxury homes built per year, the 2014 number for Northern Nevada was fewer than 100, Scharosch said. Most of this construction, primarily build-to-suit homes, is taking place in the south suburban Reno corridor and westward in master-planned communities, such as Montreux, Galena Forest, St. James’s Village, Saddlehorn and ArrowCreek.

Further south, some custom luxury homes are being built in the Sierra Nevada foothills, such as in the Jobs Peak area in Minden. Others are being constructed in Somersett, a master-planned community in northwest Reno.

Numerous luxury homes up for resale are scattered throughout the region. In the first quarter of 2015, the median home price of those was between $1 and $1.9 million, RSAR data showed.

Buyers of new and resale luxury homes in Northern Nevada tend to be from out-of-state, many from Southern and Northern California but also Texas, Arizona and other states, Hospodka said. A good number are executives whose companies are coming to the area.

The way the potential buyers are marketed to is changing. Whereas before professional photographs and a virtual tour of the home were all that was done, today, Hospodka said, her firm for instance, has shifted to creating and using lifestyle videos as well, which highlight the region and all it offers, from schools to recreation.

“It’s become about telling the story,” she added. “Every property has a story. Then there’s our own story here in Northern Nevada, not to mention our tax benefits that we constantly need to talk about.”

In terms of financing, lending has loosened a little whereas in past years, transactions were all cash. Yet, it still remains difficult for buyers to obtain jumbo loans and for builders to obtain project financing. With jumbo loans today, buyers should begin the financing process much earlier than in the past, Saunders said, long before property searching. Getting them to do so can be difficult.

Another challenge can be assigning an appropriate price to a luxury home and getting the sellers to agree to it. Pricing can be difficult because adequate comparables may not exist in the neighborhood, and sellers may believe their property is worth more than it truly is.

Agents also struggle sometimes to get sellers to understand luxury homes should be ready, with repairs and inspections already done, by the time of listing and take more time to advertise and sell than homes in other segments, Saunders said. The average time on the market for homes priced at $750,000 was about seven months in early April.

As for the next few years, the luxury market will continue to grow, Scharosch predicted, particularly with Tesla Motors Inc. and other firms setting up shop in the north.

“There’s always that magic spot in the market,” Hospodka said. “I think we’re just getting into that.”

Of the 6,400 new Southern Nevada homes built in 2014, about 200 were luxury in the price range of $650,000 and up, said Nat Hodgson, CEO and executive director of the Southern Nevada Home Builders Association, a 360-member trade organization representing the residential construction industry.

These new residences comprise both custom but, predominantly, production homes, which are located throughout Las Vegas and Henderson, but primarily in the Summerlin, Southern Highlands, Anthem and Green Valley communities, said Keith Lynam, the president of the Greater Las Vegas Association of Realtors (GLVAR) and an agent and sales associate at Windermere Real Estate in Las Vegas.

Custom homes are being erected on available lots, for instance, in The Ridges in Summerlin and both Olympia Ridge and Augusta Canyon in Southern Highlands.

In the Greater Las Vegas area, whose jurisdiction encompasses Clark, Nye, Lincoln and White Pine counties, the median home price of a resale home in the $1 million-plus price range in 2015’s first quarter was $1.4 million, according to GLVAR data.

“We’re lagging behind. Now, buyers are more discernible. There is still a reticence to jump in,” Lynam said, adding that after the recession, investors and buyers who’d been sitting on the sidelines rushed back into the market.

So far this year, no offers were made on 16 percent more luxury homes for sale than last year, which suggests the properties may be overpriced, Lynam said.

The reason likely isn’t the availability of high-rise residences. That sector, construction in which has slowed dramatically, doesn’t affect luxury home sales, Lynam said, because it caters to a different type of person.

Some buyers of new and resale luxury homes are from Nevada, but most are from outside the state, Lynam said. Many are from California, but a fair amount, too, are international buyers, especially from Canada and China.

Howard Hughes Corp. and Discovery Land Co. are planning the other one—270 homes on 550 acres in Summerlin with an 18-hole Tom Fazio-designed golf course and other amenities. Development is slated to start this quarter.

Overall, buyers are returning to the luxury home market, Lynam said, despite the slower first three months of this year.

“I think it’s going to take some time, but we’re getting there,” he added. “When they’re ready to buy, they’re buying, and they’re better prepared buyers.”