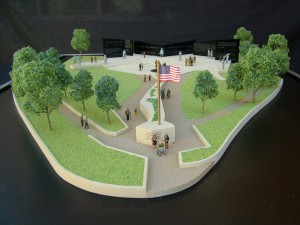 LAS VEGAS  – The Las Vegas Veterans Memorial Foundation (LVVM) announced the groundbreaking for the memorial being developed in Downtown Las Vegas is scheduled for November 2015.

Last year, the LVVM announced a partnership with the state of Nevada that includes building the memorial on the grounds of the state’s Grant Sawyer Building, near the corner of Washington Avenue and Las Vegas Boulevard North in Downtown Las Vegas. When finished, this will be one of the largest veteran memorials in the western United States.

Over the past few months, the Las Vegas Veterans Memorial has worked closely with civil engineering firm of G.C. Wallace to complete the memorial’s site plan. In addition, KGA Architecture is in the process of translating the design concepts into drawing form and submitting the plans to the State of Nevada for final approval. Both G.C. Wallace and KGA Architecture have donated their services to this project.

“We’re thankful to all of our construction partners and donors for their generous contributions,” said Scott Tiano, executive director of the LVVM. “We’re moving forward, but still need individual and corporate sponsors to raise the full $2.2 million needed for the project.  To date, the foundation has raised more than $1 million for this project from private donations.”

When complete, the Las Vegas Veterans Memorial will be a world-class monument and will serve as a reminder to all that we shall forever honor the heroism and spirit of those who have served and will serve in our nation’s military.

The developers plan to complete and donate the memorial to the state of Nevada by Memorial Day 2016.

The LVVM will feature 18 statues depicting various conflicts throughout American history. The statues are approximately eight- feet tall and surrounded by granite walls, all in a park-like setting on approximately two acres of land. Renowned artist, Douwe Blumberg, was commissioned for this project after a nationwide search. Douwe has completed more than 200 private and public commissions, with numerous awards, residencies and exhibitions to his credit. Nine of the statues have been delivered to Nevada and many are on display throughout the state. For a list of locations, visit www.lasvegasveteransmemorial.org/the-statues/.

For additional information, please contact the LVVM at info@lvvm.org or call 702.858.5886.

The Las Vegas Veterans Memorial Foundation is a tax-exempt 501(c)(3) nonprofit organization headquartered in Las Vegas, Nevada. The organization was founded by American Shooters, Inc. and formed specifically to organize and spearhead the effort to construct a memorial honoring U.S. veterans, offering a public reminder of the service provided by our country’s veterans.

Located in downtown Las Vegas on the grounds of the state’s Grant Sawyer Building, the Las Vegas Veterans Memorial (LVVM) will feature 18 larger-than-life statues surrounded by granite memorial walls. In addition to the statues, the park-like setting will provide a quiet, introspective atmosphere and will be a place for reunion, reflection, healing and forging a common bond.

The foundation’s vision is to create a world-class monument that provides a powerful and lasting experience for the visitor, while evoking a deep sense of gratitude and respect for our veterans and their families.